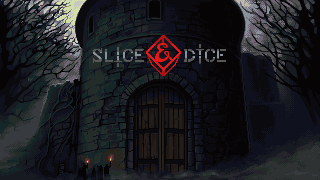 I recently started getting into a PC and mobile game called Slice & Dice, a dice-based roguelike where you complete puzzle-like battles using the custom dice assigned to a party of heroes. The game’s classic mode works as follows: five heroes across five archetypes (thief, fighter, defender, healer, mage) face off against a group of monsters. The monsters roll their dice and choose their targets, forecasting their intentions. Your heroes then can roll their dice, and you choose which actions to keep and which to reroll, with up to two rerolls per turn. You then assign your actions to prevent as much of the forecasted circumstances as possible, defeating the monsters or otherwise preventing or blocking their attacks. Your goal is to defeat twenty waves of monsters, and between each floor you are given alternating rewards of character improvements and equipable items that change or upgrade your character abilities. It’s a straightforward concept that develops layers of complexity as you consider that each of the game’s hundred heroes has a unique dice to roll as well as the 50+ monsters, plus there are hundreds of items that interact with and alter your heroes’ capabilities in different ways. It’s a solid foundation for an excellent game – but it’s also only a taste of what Slice & Dice has to offer.

As you play through Slice & Dice you earn achievements that unlock new features of the game: heroes, items, monsters, and most relevant to this article, entire new game modes. These modes riff on the classic experience of Slice & Dice in a variety of ways to create compelling new experiences. All of them are built on the same essential foundation but find a way to push the various elements of Slice & Dice in fun new directions. I haven’t played every game mode – there are still four more I need to unlock and there’s one mode I have unlocked but haven’t gotten around to yet. But I wanted to take time to dive into just some of the modes I’ve unlocked during my time with Slice & Dice and highlight what makes them special.

The classic mode of Slice & Dice gives you random starting classes within each of the five archetypes. These archetypes are color-coded. Orange is the thief, specializing in tricks, statuses, and subtlety. Yellow is the fighter, emphasizing big melee damage. Grey is the defender, protecting allies from harm. Red is the healer, mitigating harm taken from enemy attacks. And blue is the mage, supplying mana to cast powerful spells against the enemy. Within these broad archetypes are a number of variations, and each one has up to four starting character types you can unlock. When you play classic mode you are guaranteed one character of each color with the actual starting class randomly chosen from however many of the four that you have available. Custom party allows you to circumvent both the randomness and the balance by letting you choose your starting party yourself.

I’ve used custom party in a couple of different ways. The first is to play with a specific set of starting classes that still obey the game’s balance. I’ve generally done this after unlocking new starting heroes in order to try them all out at once. This is a nice way to guarantee that you’re getting an opportunity to try out all your new unlocks. The other thing I have used custom party for is to experiment with different types of party balance. How, for example, would an all physical party play? What about an all magic party? I’ve particularly enjoyed doing all-magic runs because of how magic works in this game. Your spell list is based on the classes you have in play, with red and blue characters being the primary types that actually contribute spells to the list. With an all magic party the variety of spells you have at your disposal combined with way more opportunities to build mana really helps the spellcasting system shine. These have been some of the most fun runs I have played so far.

As both a longtime RPG player as well as a fan of watching speedruns, the concept of a randomizer is one I am quite familiar with. Take the essential components of a game and move them around, switch them up; reroll the dice to create something new out of an otherwise familiar experience. There are a lot of random components in Slice & Dice from the start, but the Generate mode takes that randomness to the next level by creating totally random units in each color for you to try to beat a run with. Their dice feature randomly selected sides from existing dice in the corresponding color, creating potentially wild combinations of abilities but also resulting in some duds with tons of blanks to mitigate. These random bases then can class change into randomly generated level two and level three characters as well, getting access to more powerful abilities but still in random arrangements that may or may not be promising when pooled together.

Generate mode adds an interesting challenge and is great when you need a break from the same old same old class options. It puts emphasis on good item usage to mitigate poorly randomized characters while also giving you opportunities to improve characters and try to get better dice as the game goes on. Often I’ve found with generate mode that you end up with one really useful side that you are aiming for regularly while trying to use items to replace or buff the other sides. The choice of whether or not to upgrade is also a bit more complicated as sometimes the upgrade options will have worse randomization than the class you are starting with, so you might be sacrificing a health increase in order to keep dice that are actually functional. I don’t love to play Generate mode often but it’s an interesting change of pace.

Most of my runs of Slice & Dice usually come in between 90 minutes and two hours depending on how focused I am on the run or if I am doing it while being busy with other things. Sometimes though you might want a more bite-sized experience with the game. There are a couple of different modes that offer this depending on how bite-sized you want to go. As the name implies, Shortcut mode offers you a shortcut deeper into a run. You’ll start on floor nine, just under halfway through a run, with a party appropriately leveled for that point in the game along with a few items as well. This takes away some of your agency in how your party was upgraded – the level two classes the game chooses for you or the combination of items you are given may not be things you would have gone for had you been given the choice. But you can take that team and then try to finish out the rest of the run from that point. If you aren’t keen on the early parts of a run or just don’t have time for them, Shortcut can throw you into the meat of a playthrough.

Instant is also aptly named and rather than giving you a series of battles to overcome gives you one battle. It randomly selects a floor and challenges you to overcome that floor with the random team and items you are assigned. The quality of the heroes as well as the items will always be based on the floor where you land so you have a winning chance – the trick is, can you use the resources you’ve been given in order to overcome the monsters before you? These are like randomly-generated puzzles for you to solve, and you can make the puzzle harder by choosing to add pluses to your instance that increase the base floor you roll by a set amount. I haven’t played a lot of Instant because a big part of the appeal to me is building up your run over time, but if you want to just squeeze in a little battle in circumstances where you can’t commit to a run, I imagine this is a useful option.

Each time you beat a floor in Slice & Dice you are rewarded with a level up for your heroes or an item to add to your inventory. These modes play with that structure and say “ah, but what if you could only get one reward type?” In Loot mode, the only reward available to you is loot: items. Your characters never get better than their starting class, so it’s up to you to pick useful items and use those items to build your party into an effective team. Loot mode is hard, because at some point the improvements that come with items really struggle to keep up with the kinds of advancements you would have received by leveling up. You are to some degree more at the mercy of RNG than usual, because an unhelpful pool of items can end a Loot run much earlier even on the easiest difficulty. This is the one mode where I have not managed to secure a victory yet – it definitely pushes you to play at a high level and make very careful, deliberate choices. And to have a decent amount of luck, too.

Raid mode gets rid of items entirely and only has you level up your characters. Now this introduces a problem – in a normal run, all of your characters are fully upgraded by the end of a playthrough. So if you’re now leveling up twice as often, won’t you cap out faster and not have anything else to upgrade? To solve that problem, Raid mode doubles the size of your party from five to ten. This also doubles the number of enemies on the screen too. It’s wild to see so many dice rolling and to have so many options to try and undo what the enemies have prepared for you. And while you’re stuck with the vanilla version of each class, having so many characters on the field at once unlocks lots of interesting combos and some classes shine in this environment more than they do in the standard format. Some penalties feel less punishing in this format too – having one character exerted or dead is less impactful when that is 10% of your team instead of 20%. I don’t have a lot of experience with raid mode yet but it may be my favorite mode in the game – it emphasizes the parts of the game that I enjoy the most and allows classes to shine in ways they may not in other game modes.

These are just a few of the many modes that Slice & Dice offers, and doesn’t even make up the full list of the ones that I personally have unlocked. My hope is that seeing all of the possibilities of this game has piqued your curiosity about it – even if the game’s classic mode doesn’t sound like your style, maybe custom party or raid or loot speaks to you instead! And while you can play the way I have and unlock the modes manually, Slice & Dice offers a convenient “unlock everything” button for those who just want to jump right in without having to accomplish specific tasks in order to get access to new modes of play. There’s so much to enjoy in Slice & Dice, and I hope if any of these modes caught your attention that you’ll give the game a try for yourself!