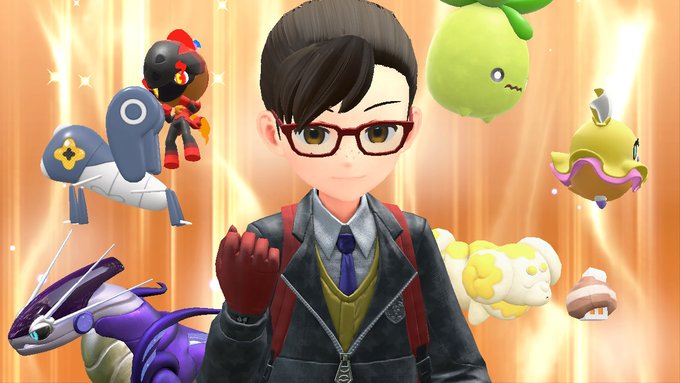 I am not well positioned to share an informed perspective on Pokemon Violet. While I did play and write about Pokemon Sword, earlier this year Pokemon Legends Arceus offered an experience that by all accounts revolutionized the Pokemon formula with regards to the capture mechanics, traversal, and the Pokedex system. I didn’t play Arceus specifically because I knew Scarlet and Violet were coming; it felt like too much Pokemon in a year for me, and some concerns about the structure of Arceus in terms of the post game convinced me to stay away from it. I say all this to establish that my evaluation of my experience of Violet comes from the perspective of someone who knows what Arceus promised but not the quality of its execution. My biggest points of reference for the Pokemon series are its mainline entries.

Pokemon Violet follows the journey of a young person who has just moved to the Paldea region, a region inspired by the European peninsula where Spain and Portugal are located. Paldea’s defining feature is an academy smack in the middle – young folks from all across the region come to the school in order to study a variety of subjects from biology to home economics to the art of Pokemon battles. The biggest event of the year is an independent study project called the Treasure Hunt. Under the guise of discovering one’s own treasure, the students are sent out to explore Paldea on a journey of self discovery. Your character specifically has three tasks that guide this treasure hunt: beating the region’s eight gyms, five titans, and the five squad leaders of a group of school troublemakers called Team Star. In total there are eighteen challenges to overcome: one per Pokemon type, with each challenge aligned with a specific type. Prior to the treasure hunt, though, the game has an introductory section where you get a taste of how exploration and capturing work. This section prior to the treasure hunt will be the basis of my first impressions.

As the setup for an adventure, I find the academy premise to be a solid one. Often in Pokemon you play a child who is sent out on their own for no real reason other than “that’s just how it is here.” The gym challenge is a journey of self discovery that’s cultural but seems highly impractical. Tying it to the academy in Paldea makes significantly more sense – having a central location organizing and overseeing this process ensures that the kids have the resources they need to succeed, a safe home base to return to, reasonable boundaries with regards to their safety, and why the heck a parent would be okay with any of this. The context of the gym challenge also becomes more like a trade certification, a specialized path for students interested in that calling with the rank of “champion” representing that you have passed a standardized curriculum. It’s all a solid base on which to build a Pokemon adventure, but a premise is only worth as much as its execution.

By this point you’ve probably heard tales and seen videos of exactly what that execution looks like. From a technical standpoint, Pokemon Violet is held together with rubber bands and chewing gum. NPCs or Pokemon more than two feet from your character become models from a stop motion animation. Pop-in occurs frequently and there are times when the camera gets wonky and you can see through elements of the world, or those elements begin to overlap or clip into each other. These are largely visual glitches that, while annoying, have never gotten to the point of preventing me from playing the game. Everyone has different standards for this sort of thing, so my recommendation is that if you are the type of player for whom bad framerates or graphics is an issue, do your research and watch some footage prior to picking up the game. I personally can put up with a lot in the interest of a compelling story or mechanics, so let’s focus on the mechanics for a bit and see how compelling they might be – at least at first glance.

Overworld movement has a lot of similarities to other mainline Pokemon titles. You can walk, run, and sneak to move around, but on your own don’t have much ability to traverse vertical spaces. You can run up a ramp but can’t climb or jump, for example. The main way your character moves vertically is down, which you do by falling off ledges like in previous titles. Of course, a ledge in Pokemon Violet is not like the little rocky bumps in Pokemon Red or Blue where it looks like anyone taller than two feet could jump over it. It’s a lot more like jumping off a cliff. Thankfully, your Rotom phone has a function for catching you before you crash land, giving you essentially a “safe fall” function that means you’ll never take fall damage in the game. Even better, it has a “go back up” function you can activate to return you to where you fell from in case your tumble down the cliffside was, in fact, an accident.

The game has a free camera which is controlled with the right analog stick, but can also be reset behind the player with the L button. The ZL button is a lock-on mode that looks over your character’s shoulder at the nearby space and indicates which Pokemon you are currently focused on. This is important because of some other unique features of this game. By pressing ZR, you can throw your lead Pokemon’s Pokeball forward to let them out to run around or – if you’re targeting a wild Pokemon – to initiate battle with that Pokemon. The lock-on tells you what you’ll start a fight with when you throw out, which can be important when two wild Pokemon of different species are hanging out close together (and they will be). Locking on also tells you which Pokemon will be attacked if you send out your lead using the “let’s go!” command.

“Let’s go!” is a brand new feature to Scarlet and Violet in which you can send out a Pokemon to battle without interfacing with the battle menu. In other words, it can autobattle while you go pick up an item or something a short distance away. I cannot emphasize enough to you how much faster this is than battling in the traditional fashion. If your Pokemon is similar in level to the opponent and has type advantage, they will simply wipe them off the map and give your entire party experience points all at once. No lengthy battle animations, no slow repetitive text to read through, no annoyingly delayed battles due to confusion or paralysis or double team or whatever other annoying shenanigans a wild Pokemon may attempt. “Let’s go!” seriously reduces the strain of grinding to make it as streamlined as possible, and this combined with having instant access to your PC box anywhere in the game world means that you can keep a wider selection of Pokemon trained up in a much more reasonable amount of time compared to previous entries.

Naturally, though, you’ll still have traditional battles against both wild Pokemon as well as other trainers. These have changed slightly in presentation but not in substance. You’ll choose from one of four moves that your Pokemon has active to deal damage or inflict status conditions on your opponent, with the goal of reducing their HP to zero so they faint. If you want to capture a wild Pokemon, you increase the odds of capture by reducing their health, inflicting a status problem, or using a specialized or high quality Pokeball. Capturing grants XP to your full team just like winning a battle, and captured Pokemon are added to your Pokedex as well as your battle team or your PC box. In addition to being able to access your PC box anywhere, another quality of life feature that is battle-adjacent is the ability to re-remember any of your Pokemon’s precious moves without the assistance of an NPC. This makes it easier to switch builds, if that’s ever a thing you feel like you need to do.

The most notable new feature with regards to combat is terastilizing – no I did not spell it right and no, I never will. Terastilization is a special power you unlock just before the world opens up that changes your Pokemon’s type to their tera-type, and boosts the power of moves that match the tera-type. It’s more subtle than some of the combat gimmicks of the past but so far from what I have seen of it, also significantly more interesting in terms of the potential applications in battle. This is because tera-type doesn’t have to match the typical type of a Pokemon, meaning you can change their strengths and weaknesses mid-battle with terastilization. If you bring in a grass type because your foe is water but then they terastalize into a bug type, the opponent is now the one with type advantage. But if you expect the terastilization and bring in a fire type, that Pokemon still has water moves you have to worry about. I can see terastilization adding some very interesting layers to the competitive scene, and I’m excited to move forward in the game and see how the campaign utilizes it as well.

So what does a typical gameplay loop look like in Pokemon Violet? When you enter a new area, you’ll see new Pokemon wandering about in the overworld. Sneak up on them and throw your lead Pokemon out to initiate battle, weaken the Pokemon, and capture them. As you explore and find all the new species in an area, you’ll be slowly leveling up and building your team. Once you’ve caught everything nearby, you can battle with “let’s go!” to train up the team members you want to invest in, targeting down Pokemon they have type advantage against in order to build XP quickly and efficiently. While you’re doing this, you can be picking up items or TMs you find laying around the overworld. When your team is ready, you can pursue trainer battles to test your combat skills. These are the basic building blocks, with the various activities of the treasure hunt adding on layers of complexity as you go.

My experiences with Pokemon Violet so far have a decent amount of promise. I’m enjoying quite a few of the quality of life features that the game has added and the core loop is solid. It’s frustrating that the experience is muddied by poor performance, and I want to emphasize that for some folks that performance might be bad enough to serve as a turn off. But if the game has a solid enough variety of Pokemon to find and the various locations in the open world are satisfying to explore, then I think this system is a solid foundation for those features to build upon. My next article on the game will be more informed by the challenges that the story has to offer as well as what kinds of opportunities exist in the open world. We’ll see if the game successfully executes on the promise of its early hours.