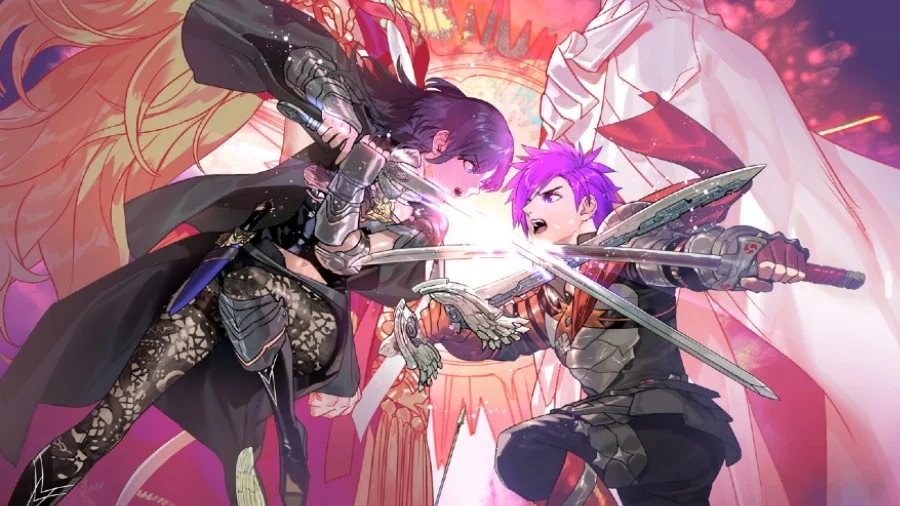 Last week I shared how my first playthrough of Fire Emblem Warriors: Three Hopes ended in disaster. I missed a crucial choice which caused me to miss two chapters of content at the end of the game. At the time I determined that I would utilize the advantages granted by new game+ in order to quickly push through to where I messed up and then finish the game with the proper ending. Having now completed that process, I’m in a position to share my full thoughts on Three Hopes based on two runs of the Golden Wildfire path. Both were played on normal difficulty in casual mode (no permadeath), with one run being a new game+ playthrough.

In case you’re here to learn about the game for the first time, Fire Emblem Warriors: Three Hopes is a musuo game set in the world of Fire Emblem Three Houses. It is essentially an alternate reality. You play as Shez, a young mercenary who battles against Jeralt’s Mercenaries, the group to which the protagonist of Three Houses (Byleth) belongs. You are the only survivor of that battle and swear to defeat Byleth with the help of a strange magical being who grants you unusual powers, Arval. Shez’s presence in the story leads to circumstances where it is Shez, not Byleth, who meets the students of Garreg Mach Officer’s Academy and saves them from bandits one faithful evening before classes begin. Instead of Byleth becoming a professor, Shez becomes a student, and this set of circumstances drastically changes how the story of Three Hopes plays out.

This alternate universe approach has some pros and cons. Three Hopes assumes familiarity with the original game. If you have not played Three Houses, you will be spoiled on major plot points as well as not having the background information necessary for certain moments of the game to make sense. If you have played Three Houses, early on in Three Hopes you’ll start to see clear differences in the events unfolding as well as the characters involved in the action. Significant characters who were frequently mentioned but never appeared in the first game – such as Hilda’s older brother Holst – finally make their appearance in Three Hopes. These are fun moments that help the world to feel more filled out, and there are certain times where it feels like the writers are actively trying to fix issues with the first game.

These “fixes” are hit or miss for me. I appreciate that certain characters are more integrated into the story this time but I think that the writers have gone a bit too much out of their way to “clean up” certain members of the cast. Here’s an example from the Golden Deer route: Lorenz Gloucester’s father Erwin is portrayed in the first game as a power-hungry, scheming count. He conducts shady business to try to undermine Duke Reigan and happily betrays Leicester in favor of the Empire. In this game, these actions are recontextualized to either wash Count Gloucester’s hands of them entirely (Those Who Slither in the Dark did it, obviously!) or to portray him as a man who was motivated not by a desire for power but by concern for his people. I don’t think editing these details in post was particularly necessary nor did it do anything to make Count Gloucester or his son Lorenz more compelling. If anything, Lorenz was a more interesting figure when his loyalties were torn between his obviously-corrupt father and the secretive Claude.

Mechanically, Three Hopes does a good job of combining traditional musuo mechanics with elements from Three Houses. The core playstyle of a character comes from the class they are playing as, with your combos and weapon proficiency decided by the class choice. However, each unit has abilities unique to them that vary how they function within the role they are playing. Marianne for example causes snow to fall and freeze enemies when her hit count reaches a certain value while Lysithea instead builds up a meter that allows her to execute an attack which launches enemies towards a point in front of her. Characters are also differentiated by the combat arts, spells, and abilities they unlock in their classes, giving them different elemental preferences or different unit types they have an advantage against. I enjoyed this system as it made experimenting with different characters and different classes feel worthwhile.

Structurally, each chapter consists of a single main conflict and usually a number of side battles to complete as well. These side battles give you resources like building materials, cooking ingredients, money, or weapons to help you in future conflicts. They can also unlock strategies which can be used in the main battle to give you an advantage. Between battles, you return to your camp where you can participate in a number of activities like training, having tea with your friends, doing chores to build support points, and speaking with characters either around the camp or in scripted support conversations. I enjoy games with this sort of structure as having a variety of activities keeps me from burning out – doing a mission gives me resources that I am then motivated to go and use at camp, and getting the new bonuses at camp motivates me to head back out to the battlefield to try out my new weapon, class, or to build up a support relationship I really want to see. The games works best when these loops feed into each other and keep giving you things to do.

This becomes an issue later in the game as you begin completing essential tasks. If you’re playing optimally on standard difficulty, chances are low that the game is going to offer much in the way of a challenge, and you’ll likely max out your characters and facilities a few chapters before the game actually winds down to a conclusion. Once you hit a point where you no longer care about what classes your characters are mastering, what materials you are earning from missions, or what supports you are unlocking, you’re left just kind of moving from mission to mission to progress the main story. Unfortunately, at the same time that the mechanics are losing steam, the main story is getting weaker. As time runs out to explore everything the writers are interested in getting to, more and more important-seeming details are skipped. By the end of the game, the actual narrative feels phoned-in, a total afterthought compared to everything taking place earlier in the game.

Having not played the Azure Blaze or Crimson…whatever paths yet, I can only speak to how the game ends on the Golden Wildfire route. But the abruptness of the ending and the lack of closure it provides left me deeply disappointed. When I beat the game the first time having made the incorrect choice during chapter ten, I assumed I had gotten a “bad ending.” As it turns out, the actual ending of the game – the final battle and the “events” that follow after – is the same whether you make the correct choice or not. The choice simply decides whether or not you get to see two additional chapters which offer only the vaguest explanations for some of the biggest questions of the game. Who is Arval? Why do his powers appear to be connected with Those Who Slither in the Dark? Neither of these questions are answered in a way that feels satisfactory or adds anything meaningful to the lore of Three Houses. On the Golden Wildfire path, when you beat the game it isn’t even clear if the war is over or not! I legitimately wonder if there was an issue with development time in this situation because it feels like the ending is unfinished.

Three Hopes is at its best in the early game when both mechanically and from a story perspective, it feels like you are fully exploring alternate possibilities for the world of Three Houses. The mechanics motivate you to keep playing as they feed into one another and the story takes time to explore ideas that were left to books or side conversations in the first game. By the time part two of the story rolls around, the story momentum has started to fall away. Once the mechanical momentum follows suit about three quarters of the way through, the end of the game feels like an unrewarding slog, especially so on the Golden Wildfire route where the narrative rewards for completing the game are essentially nonexistant. The stakes that made Three Houses compelling are gone, the new questions introduced by Three Hopes remain unanswered, and there is no closure to be had for any of the characters involved.

Whether or not Three Hopes is worth your while ultimately depends on why you are coming to the game. If you are a musuo fan who wants to see how a Three Houses spin on that formula works, there is a lot to like here and you’ll probably get even more mileage out of it by playing on hard difficulty with classic mode (permadeath) enabled. If you are a Three Houses fan who simply wants to see more of the setting and characters, Three Hopes delivers in the first half but ultimately fizzles into a shadow of the game that came before. Particularly if you are hoping for a “golden path” where everyone ends up happy, this game is not going to satisfy that for you. Less people die but that’s only because of an ultimate lack of resolution, not because everyone learns to hold hands and join together in harmony. I only recommend this game to those who are primarily motivated by game mechanics and will not be impeded by a lackluster narrative. If story matters more to you than gameplay – especially if you already don’t like musuo gameplay in the first place – Three Hopes is likely not the game for you.

If you’re someone who is thinking about picking up Three Hopes and you still have questions after reading this review, feel free to leave a comment – if I am able to answer, I’ll be happy to do so. At the time of posting I have only played through the Golden Wildfire route but I probably will still slowly make my way through the other routes as well to get an idea if any of my issues with the game are addressed on those paths. If Three Houses taught me anything, picking a lousy route (looking at you, Silver Snow) really can make a big difference in the final impact of a game that features multiple paths.