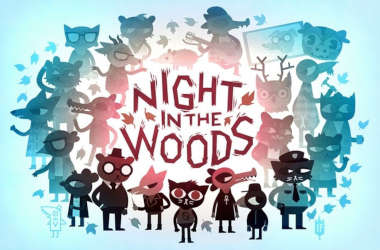 This article features unmarked spoilers for Night in the Woods, including the final act of the game.

In my previous articles regarding Night in the Woods, there was one aspect of the game that I repeatedly mentioned was keeping me engaged: the horror element. In small but significant moments throughout the first couple of acts, you are presented with subtle moments of surreal terror that point to something potentially terrifying that the game is building to. The entire third act is built around this tension – after protagonist Mae Borowksi sees what she believes to be a ghost, she dedicates her free time to searching for it alongside her closest friends. During these adventures I spent one particular evening with Mae’s friend Bea, who seriously doubts that the mysterious figure haunting Mae is in fact a ghost. When Mae tries to challenge Bea and question what frightens her, the exchange that follows is one which struck me deeply.

The two of them begin to construct a scary story together. “There’s a spooky figure out the window,” Mae might say, and Bea counters that this figure simply being a man is frightening enough. “He’s smiling menacingly,” Mae adds, and Bea elaborates that the smile is because he is a banker who is giddy at the thought of the money he’ll make because he is here to take your house. When Mae complains that Bea’s stories are boring, Bea’s response is that the most terrifying things in life are deeply boring. Cruel bosses, getting sick without health insurance, the rent going up year after year – life doesn’t need ghosts and zombies to be scary. And neither, as it turns out, does Night in the Woods.

The mysterious kidnapper which Mae saw in the dead of night, the source of the dead arm she found on the side of the road, is indeed not a ghost or demon. He is, rather, a normal person from the town of Possum Springs. He is one of many, a group of individuals who make regular sacrifices to an entity they refer to as the Black Goat. Their belief is that this being helps their town prosper in exchange for the lives of its citizens. Crops grow, businesses stay open; the Black Goat causes these things to happen as long as it is satiated. And this council of elders who believe in the Goat think they have the clearest heads when it comes to deciding who should be sacrificed. Their victims are the downtrodden, the people that they see as outcasts from society: immigrants, “deviants,” the homeless living on the train tracks. In their minds, these people don’t deserve to live, and so dying to appease the Black Goat is the greatest way they can contribute to society.

Now the game leaves open the possibility that the Black Goat truly is an entity that exists. Mae sees it, or sees a semblance of it. Of course, the reliability of the narrator in this case is certainly suspect. Borowski is deeply stressed, running on minimal sleep, and has pushed her physical body to the limit despite a terrible head injury. There could very well in this world be some kind of ancient god-thing that the townsfolk have chosen to make sacrifices to. But the Black Goat itself isn’t the terror, and the fact of its existence is a far less pertinent topic than the belief of the townsfolk in that existence, and their twisted interpretation and dedication to the cause. The true horror haunting Possum Springs is not the Black Goat itself, but the impact that its very mundane believers have on the community when they run about the place believing that they have been given divine authority to determine who should live and who should die.

Night in the Woods, at its core, is an examination of the conditions that create a place like Possum Springs. Corporate oligarchs line their pockets by shuffling their businesses around like pieces on a chessboard while the people left behind struggle to put their lives back together. The American Dream of an honest day’s work supporting a lifestyle where one can have a home, support a family, and indulge in hobbies has proven to be a lie. The pitiful, underpaying jobs offered by vindictive bosses are no longer enough to support even one person’s basic needs. And whatever spirit or gumption people used to have to do things like smash the teeth out of the boss’s mouth – like Mae’s grandfather did in the days of the mine and the union – that spirit is gone, now.

The people who are left in this disastrous state are put into an untenable situation. They didn’t start it, didn’t ask for it, and can’t really do anything about it. So the essential question is: how do they deal with it? The ways we allow the mundane but existential horror of reality to impact our lives are multifaceted and Night in the Woods presents a lot of options with subtle differences. Form a poetry club, tell stories about the stars, watch television comedies late into the night, serve at church, scavenge through junk – the options go on and on. But in my view the core conflict is that between the approach taken by the Black Goat cultists versus the one taken by Mae’s friends.

The former radicalize in the worst way possible. Rather than punching up and directing their rage at the corporate overlords who created these unbearable circumstances, they punch down, finding the people they feel they have some power over and punishing them for a crime that isn’t theirs. They destroy instead of create and call it “contributing to society.” They kidnap teenagers or homeless people off of the street and throw them down a sinkhole and think themselves as heroes like the boss-punching miners that preceded them. Calling their cruelty kindness and their murderous instincts holy, they do nothing to make Possum Springs better while accelerating its decline into a literal ghost town.

But where the cultists find hope in hatred, the kids find hope in love. Angus, Gregg, and Bea have all lived hard lives. They’ve survived abuse, survived tragedy, survived harassment; through their dead-end jobs and their silly but ultimately harmless antics they’ve managed to carve out lives for themselves despite living in a town that’s dying. Being weirdos themselves they embrace the other folks that society people like the cultists have determined have nothing to offer the world but their sacrificial blood. And there’s nothing noble about it, not really. They’re just being human to each other, and seeing the humanity in other people too.

Night in the Woods is a game of horror and hope. The world is a cruel and uncaring place, and we’ve been thrust into it with little power to undo the horrors that wait for us. We can let that suffering sour into hatred that we turn against other people who have done us no wrong, or we can find comfort in other people and in the little things that bring joy to our lives. Through friendship, through art, through building a forest god out of a stolen robot head, we may not be able to escape our metaphorical Possum Springs, but we can at least survive.

To thrive? Well for that, we may just need to turn our rage to the real bad guys and break a few teeth.