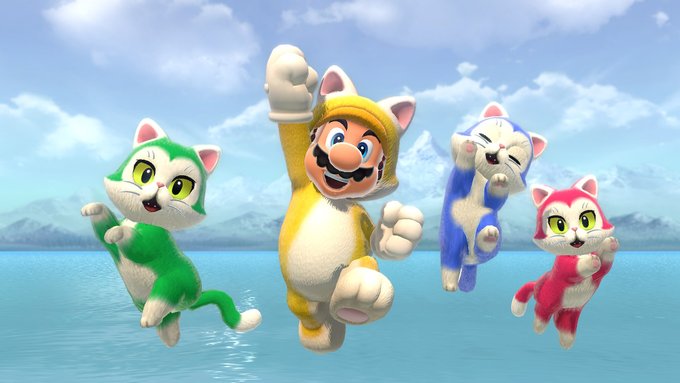 Last week I shared my first impressions of Bowser’s Fury. This new game mode added to Super Mario 3D World’s Switch version takes the mechanics of that game and introduces them to a fully 3D environment. I described that while 3D World felt like it played too safe in terms of Mario Platformers, Bowser’s Fury had the potential to be the experimental something that really grabbed my attention. It didn’t take long for the elements that made Bowser’s Fury feel fresh to be unable to counteract how much of that mode is still essentially the same thing you’re doing in the main game. But while I am ultimately unimpressed with the new mode as a whole, I think there is some promise to the Fury Bowser mechanic and what it could mean for future Mario titles.

So what is Fury Bowser? This giant and dark version of the beloved Nintendo dad is a boss that periodically manifests while you are exploring the world. You can actually see the cycle off in the distance if you look at the central location where he spawns. A few spikes of his shell begin to rise from the black sludge where he sleeps. Soon the whole shell emerges and begins to lift into the air. As it floats it slowly spins around, the spinning growing faster as the time for Fury Bowser to emerge gets closer. Finally, the spikes on the shell begin to glow red and rain begins to pour as his awakening becomes imminent. Fury Bowser then erupts from the shell and lands in the water near the island you are currently exploring, where he peppers the environment with columns of stone and breathes fire at you in an effort to destroy you while you can’t fight back.

When Fury Bowser comes for you, your mode of exploration switches from a slower paced opportunity to poke at every nook and cranny to a hectic scramble to find the nearest Cat Shine possible. Only these lights among the darkness can drive back Fury Bowser for a bit, though at lower levels of progress in the game he can also get bored and give up chasing you. As the stakes get more dire he’ll get more aggressive and stop giving up, and in the lead-up to the “final battle” (read: the battle that will get you to the credits) even Cat Shines cannot drive him away. The real tool for dealing big damage to this big Bowser is the Giga Bell, which turns Mario into a giant version of Cat Mario that can then compete with Fury Bowser on an even playing field.

This is all very neat in the early hours, but the overall structure of this game is such that the newness wears off somewhat quickly. For example, every one of the game’s islands has a Cat Shine tied to having Bowser breathe fire on a set of Fury Blocks hidden in the environment. So the act of setting that up becomes routine early on. The battles against Fury Bowser are also pretty similar overall with only one new mechanic sprinkled in at one point about halfway through (excluding the final showdown, anyway). And while islands you explore in this mode can sort of be grouped together based on similar themed and physical proximity to a Giga Bell, they still feel disjointed and there’s really no character or personality to this world in the same way that a 3D Mario world has a number of unique features and even NPCs.

I still think the idea of Fury Bowser has a lot of potential though, particularly when you factor in elements that exist in proper entries into the 3D Mario canon like 64, Sunshine, and Odyssey. I imagine a game in that style that is broken up into a number of different worlds with a distinct identity. Compare the different kingdoms in Super Mario Odyssey: the Wooded Kingdom, Metro Kingdom, and Bowser Kingdom all have very different flavors and themes that help them to stand out within the same game. Through the capture ability, these locations also have unique mechanics to engage that make moving through the areas and battling the enemies there feel different. These areas are also much bigger than even the groupings of islands in Bowser’s Fury, and the fact that they are populated with NPCs help them to feel like real places rather than just Video Game Levels™️.

Now imagine a game which features worlds as unique as those where each world has its own Fury boss. Rather than reusing Bowser in every area and getting used to his patterns, every world could have a giant version of another Mario enemy with their own mechanics to navigate. Imagine if in Mario 64 the giant Boo at the mansion could manifest at set intervals and start making key platforms invisible or make walls intangible for you as it passes through them. In Mario Sunshine’s Ricco Harbor perhaps new paths could be opened when Gooper Blooper lashes out with its tentacles to knock aside steel beams too big for Mario to move himself. Having unique giant bosses for each world could help to make each one more distinct through new mechanics, offering different types of platforming challenges but also new opportunities depending on how the boss interacts with the environment.

How Mario fights each of these bosses and what giant transformations he can bring to the table could also vary by world. In Bowser’s Fury, Mario always changes into Giga Cat Mario, which behaves essentially the same as his normal cat form but at a larger scale. I’d like to see powerups differ more at that massive scale. Mario’s classic fireball launches quickly and bounces as it travels, but perhaps in giant form there would be a slow charge up that then fires a beam, requiring you to be more intentional about when you are using your flames. I also think it would be fun to craft more situations where a normal sized Mario has to climb these giant enemies or approach them while riding something in order to get to a point where he can deliver a crushing blow. Imagine scaling Bowser’s spikes while avoiding flames and finding places to hold on for when he spins his shell to throw you off, slowly making your way to the top of his head to deliver a ground pound right to his oversized noggin. By not only having unique bosses but also giving Mario varied ways to deal with them, it would keep the experience from feeling as stale.

I don’t know what to expect from Nintendo in terms of what a future 3D Mario title would be like. Bowser’s Fury appears to be an experiment and based on sales numbers that experiment was pretty successful. This doesn’t guarantee that any of the new mechanics will carry over, and even if they do there’s a chance that Nintendo keeps things as simple in that game as they did for Bowser’s Fury. But for now I’m excited for the possibility of something new to be built from this in the future!