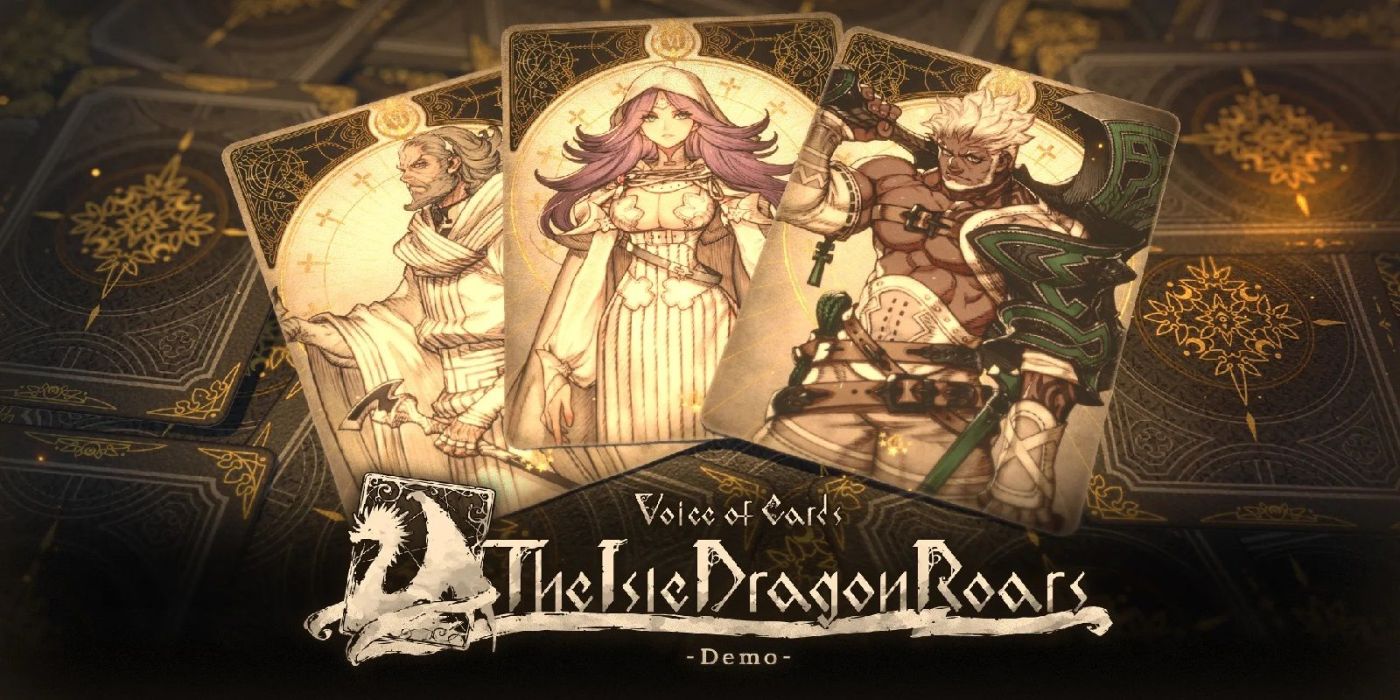 There are a lot of video games that try to capture the magic of a tabletop roleplaying. Some strive for this through mechanics pulled directly from Dungeons and Dragons or other TTRPG systems. Others focus on the aesthetic and present the characters as miniatures on a physical map while showing you the dice rolls rather than running the RNG in the background. Still others try to capture the sense of comradery, giving you a multiplayer experience in a world full of quests and loot to explore with your buddies. While the ultimate game for capturing the TTRPG experience may be out there somewhere, I personally have never played one that successfully captured the spirit that draws me to tabletop games. It’s not for lack of trying, though, and so when Voice of Cards was announced at the recent Nintendo Direct complete with a free demo, I decided to download the demo and give the game a go.

Voice of Cards was advertised in the direct as a tabletop RPG experience about a young hero, his quiet monster companion, and a dragon-hating witch. Weirdly enough, none of those three characters make an appearance in the demo, which I suppose could be a prologue of sorts with characters who will either die or otherwise be removed from the action for awhile as the main cast rises up. This makes it challenging to talk about the characters, but it’s a bit hard to talk about the characters anyway because of a particular feature of this game: the entire story is conveyed to you by way of a gamemaster. This includes narration of story beats, dialogue of party characters and non-player characters – the whole demo is voice acted by one guy, which is a neat idea in terms of creating a vehicle for conveying the story but has the effect of making all of the interactions in the game all blend together.

That’s not the only aspect of Voice of Cards that attempts to draw from tabletop games in order to change up the presentation. The overworld map is always a large series of cards laid out face-down on a table. Your party is represented by a small figure similar in shape to a chess piece. The piece stands on top of the cards laid out on the table and moving to a card flips the cards adjacent to it (including diagonals) so you can see what is on those cards. This could be terrain – essentially empty cards that don’t do anything – or a number of more interactive cards such as characters to talk to, shops to visit, or treasures to open. Navigating a new area is a repeated journey of moving to a card, flipping the ones around it, moving to a new card, flipping the ones around that, etc. Certain terrain types such as mountains or cave walls force you to stay within boundaries, or the GM can annoyingly tell you that he hasn’t finished prepping the story for an area and make you walk back in a different direction. Outside of dungeons you can quick-jump to any card that you’re allowed to stand on that is already revealed, essentially functioning as this game’s version of fast travel.

This is all a neat idea for how to present the world, but it has some flaws. Movement is relatively slow because it is always taking place a single step at a time: move to a card, flip cards, move to a card, flip cards. This slow revealing of the terrain would be more compelling if finding new card types meant anything, but outside of the occasional chest just walking around to fill out the board for the sake of it has no meaningful purpose outside of giving you an opportunity to grind levels. After all, this is an RPG, so what would it be without random encounters as you wander around the overworld? Unlike a 3D game where you could theoretically see something interesting in the distance and make the choice to go explore it, Voice of Cards simply asks you to reveal a board of mostly nothing in hopes that maybe you’ll find something like…a bottle of basic medicine…

So how about combat? When you start a combat encounter, a small board is placed on top of the card-map and your character and ability cards are laid out on top of it, as well as the enemy cards. On the left side you have small crystal-like objects called gems which represent the energy you have to take actions. On the right are the various dice you might see used during the battle. Characters move in a determined order based on speed and can use any ability for which they have enough gems. Most characters have a basic move that doesn’t cost a gem and one or more stronger attacking moves that cost one or more gems to use. Since you draw a gem as your turn starts, any given character can always use at least a move requiring a single gem, but using a card that doesn’t cost a gem will help you to build up more towards bigger attacks. Not that you’re ever going to need to do that.

You see, you start every battle with two gems in play already, and after leveling up for the first time your “main” character gains an ability that uses two gems to deliver a really powerful attack. Against most of the enemies in the game, this attack is enough to take them out in a single blow. The ones who survive it typically will only have a sliver of HP left, making it very easy for one of your other characters to take them out with one of their high-damage one gem attacks. Battle difficulty is balanced as if you’re playing an MP-based RPG where you’re theoretically supposed to be conserving your stronger moves and getting worn down through attrition. Instead, you can just blast everything the second you get into combat and move on with your life. The battles have no element of strategy and are poorly balanced for the way the game’s mechanics operate.

With slow, tedious overworld exploration and combat encounters you could win on accident, we are left with only the story to bring this game up from mediocrity. The story opens on a castle where a group of heroes has been called before a queen. The heroes are members of what is called the Ivory Order, which we learn quickly is highly respected by everyone in the kingdom. The Queen informs the heroes that the royal treasure, a bottle of strange liquid, has been stolen from the castle. The heroes will be given whatever reward they wish in exchange for the return of the treasure. The heroes trace the thief to a nearby town, follow the trail west from there, and with the help of a local fisherman cross the river to a dungeon where they defeat the thief and return the bottle. Just as the Queen thanks them for their service, a dragon shows up. The session ends there, with the GM telling the player he is excited for the next game.

If that sounds like the opening quest to pretty much every JRPG you have ever played, you’re not alone. While I’m sure it is possible that later on some serious Yoko Taro weirdness comes into play, demos are meant to give the player a strong taste of what to expect from a game. The expectation set by the Voice of Cards demo is that the plot will be pretty much identical to any other RPG you can yank off of the shelf at your local Gamestop. This blandness extends to the character designs and personalities. While the artwork on the cards is lovely, the you could find these characters in any other JRPG and they wouldn’t feel out of place. A female magician with her tits out, an old magician who is a know it all, a buff guy – there’s really nothing to write home about here. Allegedly in the full game the “story cards” for the characters that you can read from your menu will have a back side with more information, but without the ability to get even a glimpse of the quality of info that these flip sides could have I have to assume that they will be just as bog-standard as the front side of the card. And honestly some of the front sides are downright awful, like the proprietress of the inn whose entire description is actually about her husband who you never see in the game.

Voice of Cards attempts to capture the magic of tabletops by presenting the world, characters, and battle mechanics through digital versions of the tactile elements a player would engage with when playing a TTRPG. It’s a neat convention but not nearly neat enough to hold up an RPG that feels like a flash game in its simplicity, both mechanically and narratively. Combining brainless battles with a story you’ve heard one thousand times and sprinkling it with a bit of casual sexism for good measure, Voice of Cards is another resounding failure to recreate the experience of playing tabletop roleplaying game, and in the process it fails to be a decent video game too.