I try to keep myself pretty measured when it comes to opinions about video games. I find that getting worked up or hostile about them isn’t something that brings me any joy, and I most like to talk about games with people who share primarily positive thoughts on the subject rather than negative. That said, I have been known to be a person who has some pretty strong Opinions™ when it comes to Mario RPGs. I have a definitive ranking of Paper Mario games as well as a strong preference for Paper Mario over the Mario & Luigi series. Sticker Star is one of the only games I ever sold back to the retailer. So you can imagine that when a Mario RPG that featured the annoying and ridiculous Rabbids was announced, I immediately was ready with judgment about the decision to put time into a project I felt could not possibly appeal to anybody.

I think it’s important to clarify here that I had never played a Rabbids game. There was no real basis for my judgment outside of appearance. I heard them compared to Minions on GameXplain and I think that best captures how I felt about the little nuisances. They seemed irritating, unfunny, aimed exclusively at young children to play off of the worst possible aspects of their sense of humor. How could Nintendo possibly want to make a game featuring these goofballs when they hadn’t put out a good Mario RPG in such a long time? With nothing but rumors and hints of rumors, I still felt that I had all the fuel I needed to be angry about the game.

Then there was E3. If you watched E3 in 2017 there’s a pretty decent chance that you saw the moment I’m about to describe. It took place not during the Nintendo Direct but instead during the Ubisoft presentation. Mario + Rabbids was shown off in its full glory, and Shigeru Miyamoto himself made an appearance on the stage to share kind words about the man whose creative vision led to the game. For Nintendo to share what is probably their biggest IP is no small feat; it takes trust in someone who will do justice to the property, and Miyamoto felt that the team had done just that. As Miyamoto honored Davide Soliani and his team for their work on the game, Soliani watched in tears. In later interviews, he shared that it was Mario which first inspired him to create video games and that developing a Mario game had been his dream from a young age. It was a touching moment, one that helped my grumpy heart to grow a few sizes as I had a significant realization: human people make video games. 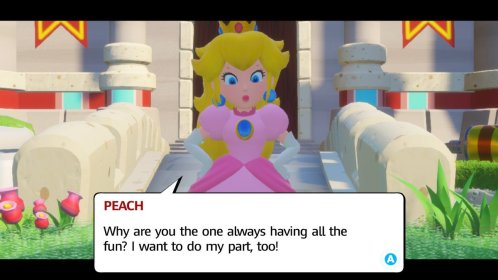 This is something I understood only on a very literal level at the time. Who else would make games; birds, robots? Obviously people made games. But what I didn’t take the time to think about until that moment was that the people who make games have an emotional investment into their creative projects just like any other person who makes things. Seeing Soliani’s reaction helped me to get that this game – a thing which did no harm to me yet I ridiculed it before ever seeing it in action – meant something to the people who worked on it. That realization about the human element of video games has stuck with me since, not only from the perspective of appreciating the creative vision of the men and women behind them but also the workload that they have to endure.

This isn’t the only way in which my close-minded approach to Mario + Rabbids was challenged during the E3 presentation. You see, my disdain for the game was based solely on the idea of the Rabbids being in the game at all. I didn’t know or care what the gameplay was like. But then they showed it off. This Mario RPG was something new and unique compared to other titles in the genre. Rather than focusing on timed button presses in a turn-based RPG format, it instead emphasized unit movement and positioning in a long-ranged firefight. I watched in awe as Rabbid Luigi gave Mario a boost into the air and landed firmly on an enemy’s head, then whipped around and fired his weapon to finish the opponent off. Seeing the Rabbids ducking behind cover, using pipes to work around tricky terrain, and deploying different types of weapons to get the advantage, I was hit with a stunning realization: this game looked amazing.

My complete 180 on the game based on its gameplay footage helped me to learn a second lesson from Mario + Rabbids: you can’t always judge a game by its predecessors. Kingdom Battle was nothing like my preconceived notion of Mario RPGs or Rabbids. My unwillingness to even give it a chance could have prevented me from engaging with a game that now seemed like so much fun. Later on, my new openness on games would help me find new titles to love from developers that I normally dismissed, and not to let one aspect of a game prevent me from experiencing the good things that a game had to offer.

When I think back to my time with Mario + Rabbids, the memories of how it shifted my perspective on games and the people behind them are the strongest. It’s presence on my game shelf is a reminder of that lesson. But that’s not to say that I don’t have fond memories of experiencing the game itself. Mario + Rabbids is a surprisingly deep strategy game given the core characters who drive the experience. It starts out simply enough but it doesn’t take long for the battles and their objectives to grow more complex. I first learned just how tricky this game could be during an extra mission after finishing the first world. A particular map gave me a very limited number of turns to get a character to a specific spot on the map. It was impossible to make the distance on foot, but I couldn’t get a setup that allowed me to make the jump I needed either. After failing the mission a number of times, I finally realized that I was meant to bait an enemy into knocking one of my party members across the river, allowing them to clear a distance they couldn’t on their own and then reach the objective.

My favorite strategy games feature unique characters who can find their own niche on the battlefield, and Mario + Rabbids satisfies that by having special skills for each character to invest in. You can respec those skills for free, further customizing each unit for every battle based on the conditions. I remember that some of my favorite moments came from finding the types of battle that each unit excelled at the most. Luigi, for example, was a character I struggled to utilize at first, but once I discovered his penchant for crossing vast distances in a single turn I began to recognize opportunities to utilize him effectively in missions where the objective was reaching a distant goal. Having a special niche for Luigi particularly resonated with me as he is one of my favorite characters from the world of Mario.

Puzzles are a big part of what makes overworld exploration special in Mario + Rabbids, and I’m a big fan of games like Zelda or Golden Sun where some clever overworld puzzles give you the opportunity to flex your mental muscle for a few minutes. Kingdom Battle’s puzzles often featured challenges related to navigating to special switches in the environment to open new paths forward, but some of my favorites were the challenges that unlocked a new weapon for a team member. These timed puzzles required you to quickly navigate around a tricky environment to pick up blue coins, and because they were short and sweet they also had room to challenge you a bit more than the larger overworld puzzles. Anytime I finished a world I would look back at my completion percentage to make sure I found all of these hidden nooks and crannies to I could proceed into the next world with the best possible loadout.

Mario + Rabbids was a great game on its own, but it also turned out to be the gift that kept on giving. The game’s DLC adventure focused on Donkey Kong was a shining example of what DLC can be for a video game. Many games have DLC which simply add overpowered elements to the main game, or only aesthetic changes that don’t do much to add replay value to your experience. Donkey Kong Adventure was a whole new side story for Mario + Rabbids, in length adding a gameplay that came out to about half the length of the original game. A 50% increase in content is no small feat for a DLC package, and what really stands out in my memory about this part of the game is how much it expanded the game rather than just iterating on the same key elements.

Movement is a big element of Mario + Rabbids and both Donkey Kong and Rabbid Cranky move in unique ways. Swinging across vines with DK or picking up allies to then toss them to another part of the map felt great and added new strategic options that didn’t exist in the past. It also combo’d well with Rabbid Cranky’s ability to shoot enemies in a square around him as he landed from a jump, and I remember the moment when I realized that Cranky could then execute that special attack again by then bouncing off of Donkey Kong’s head with his movement action. I was inspired by the DLC to add a little more to my previous Mario + Rabbids coverage by creating a guide to highlight all of the unique skills that DK brought to the table.

All of these memories are ones I might not have enjoyed if my original hostility towards the game hadn’t been challenged. I’m grateful that Miyamoto’s kind gesture and Soliani’s passion helped to pique my interest in the game and opened my mind to the folks behind the curtain who make video games happen. I’m grateful that this openness led me to make memories with this game which I can look back on with joy. And I’m grateful that the lessons I learned from Mario + Rabbids sent me forward into the world with the willingness to try other games, making even more positive gaming memories thanks to my change in perspective. Mario + Rabbids is quite the special Mario game, and I for one am glad that Nintendo were willing to share their characters and worlds so that new creators could have their dreams realized.

Wahoo! You are a Super Reader! But the adventure doesn’t stop here… There’s more of this project in another castle! This article is just one level in an entire Super Mario Multiverse, a galactic collaboration between writers around the world sharing a bit of our hearts and memories about our favorite Mario games. Visit the Center of the Multiverse to see more: