This post will include some spoilers for Dragon Quest XI as it discussed the final party composition as well as some post game bosses.

With a number of Dragon Quest titles under my belt, I came into Dragon Quest XI feeling like I had a pretty strong grasp of the game’s mechanics. Over the last few entries I’ve learned certain tricks that I like to rely on in combat. Boomerangs have become one of my favorite weapons as they make it much easier to clear out trash mobs. I’ve learned to increase skills in such a way that my characters quickly unlock spells or abilities that heal multiple characters at once. When evaluating the value of my party magicians, I pay more attention to support spells as opposed to offensive spells. And I know that the best way to deal big damage is to combine Oomph along with multi-hit physical attacks, preferably on a target that has been hit with Sap first.

Of course, tactics are about more than just your approach to each individual battle. I also had specific approaches for how I handled quests, how often I did grinding, and when I purchased equipment. When arriving at a new area I’d battle the local monsters until I had the money to buy the best equipment from the town’s shop. Combining this grinding strategy with a working knowledge of the best ways to defeat metal slimes – relying on moves like Metal Slash and Metallicker until learning high-crit attacks like Lightning Lance and Hatchet Man – meant that I spent the entirety of the main game overleveled, with my characters easily able to handle even the game’s most difficult bosses.

These strategies all served me so effectively that the main campaign of DQ11 was almost too much of a breeze. It didn’t feel like it really mattered which characters I prioritized, even though I certainly had specific ones who I preferred. Each character not only had unique abilities but also different combinations of weapon choices. And although the game offered the ability to respec skill points in order to change which weapons or abilities a given character prioritized, it never felt like it mattered which weapons I specialized in. Additionally, so light were the number of skill points available that for most of the game it seemed impractical to focus on more than one weapon for many of the characters. Unless of course you ignored the character’s unique skill, locking them out of stat bonuses as well as potentially powerful abilities.

After spending so much of Dragon Quest XI skipping merrily through fields and casually waving aside the game’s major villains, I was pretty surprised when I hit the post game and suddenly started facing some foes who were truly challenging. During the battle against the malicious auroral serpent – a mightier version of a foe from act two – I ended up needing to reset because I realized I had approached the battle with the wrong strategy. I went in with an offense-focused party consisting of Hendrik, the Hero, Jade, and Sylvando, a group with a limited number of support spells and (at the time) only one character with group healing. The serpent’s multiple AOE ice attacks tore through my team and repeatedly put me in situations where I had multiple party members down. I managed to win the battle, but not without having three different characters who were dead at the end of the match. This cost each of them experience points and set them behind the rest of my crew.

I soon had similar struggles against malicious Jormun. I approached this battle differently, already knowing that I would need some more support spells based on my fight with the auroral serpent. But Jormun had abilities that required me to yet again reconsider my party composition. He could put party members to sleep – one of the status problems that Serena is incapable of dealing with – and he used Oomphle on himself to dramatically increase his attack power. In this state he could one shot both Serena and Rab, the characters I experimented with serving the healing role during this battle. I ended up needing to bring in Sylvando, who had a whip skill that allowed him to clear the Oomphle status on Jormun and reduce the damage he was dealing to my party.

Now in case it sounds like I’m complaining, I really enjoyed that these matches challenged me and forced me to engage the game’s combat mechanics in a smarter way. It was fun needing to change around which weapons I was using and which weapon skills I invested in, as well as seeing which characters had the best spells for any given encounter. I was beginning to use characters that I had mostly ignored throughout the campaign because I now needed to take advantage of the abilities that they brought to the table. These sorts of mechanical challenges – rearranging party composition and character building to overcome specific enemy strategies – showed off what the DQ11 combat system is truly capable of.

Unfortunately not everything about the post game bosses is an improvement. Compared to the bosses in the main game, post game villains have a greater number of abilities that inflict status problems on the party. Being put to sleep or paralyzed makes a party member effectively useless for multiple turns, and some conditions like being confused or cursed can only be healed by one particular party member, one character at a time. This makes gear that prevents status problems – and not just one but many – essential during the post game. The problem is, this sort of gear can’t be purchased; it needs to be crafted. And crafting rare gear is a challenge that adds a large amount of grinding and farming to the final hours of the game.

Let’s talk about some of the game’s rarest materials. One is oricalchum, an ore that is needed for multiple high quality weapons and armor. Oricalchum spawns in only two locations in the game. These spawns are draw points which, after being mined, take a certain amount of time before you can get any material from them again. There are a large number of crafting components that can only be created by Krystalinda when you give her something called a serpent’s soul. Serpent’s souls are items that can be stolen from specific enemies, so they are a little easier to access, but that requires time spent grinding multiple battles against these enemies because serpent’s souls – or rather, the items they are crafted into – are needed in somewhat large quantities. Another needed item is the elfin elixir, which restores all of the MP to a single character. The next-closest MP restore only gives 90, which is only enough for a single cast of a high-level attack spell like Kafrizzle or Kaboomle or a healing spell like Omniheal. Elfin elixirs require a different kind of grinding, significant time spent in one of the game’s casinos in order to accumulate enough tokens to win the elixir as a prize.

Getting all of these materials together in order to defeat the more powerful endgame bosses – not to mention the final boss of act three – is a time-consuming endeavor that isn’t broken apart by story sequences or spread evenly through quests. The process of stealing serpent souls, spinning and resetting in the casino, and slowly farming rare mining materials isn’t a particularly enjoyable one, and doing all of this extends the amount of time that you have to wait before engaging in more of the mechanically compelling post game battles.

Now let’s look at this again in context of what I shared about the early game. Dragon Quest XI starts out easy and stays that way throughout the first two acts. It’s easy to become overleveled and this takes away any need to pay attention to the mechanical aspects of the game. You earn crafting materials quickly via quests or, in situations where the materials aren’t in your inventory, you can purchase the missing ones for a small percentage of your obscene amounts of gold.

Then you hit the post game. Suddenly, the materials you need to craft things aren’t readily available anymore, and finding them through quests isn’t an option either. You have to slowly collect some items and grind for others, slowing down the action of the game just as the battles are finally getting good. Unfortunately, even though the battles do require more levels of strategy, they also require you to have specific pieces of equipment in order to give your crew a necessary competitive edge.

What really works about Dragon Quest’s combat waits until too late in the game to be fully incorporated – and then when it is, it is taken too far to the other extreme and requires a lot of grinding from you in order to be able to compete. The game would have benefited from having the difficulty and the crafting challenges more evenly spread throughout the title, allowing you to gradually reach the point where you were ready to take on the final boss having both the necessary gear as well as the skillset to carefully consider weapon skills and party composition when approaching an enemy. 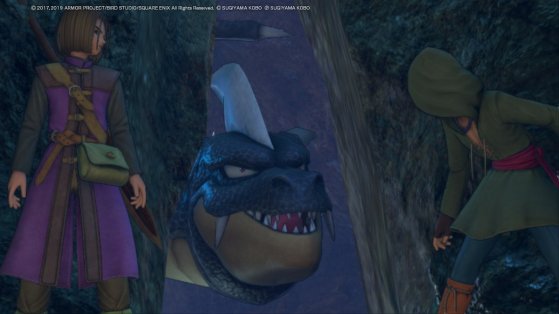 I enjoyed my time with Dragon Quest XI and, at the time of writing, I do still intend to do the grinding needed in order to make the items I need to be able to effectively take on the post game final boss. But I do think it would have been nice to have some of the grinding I’m doing now spread out through quests earlier in the game, and to have been challenged by previous battles to think more critically about my characters and their abilities. The main campaign and post game each have their own strengths that, brought together, would make the game an even stronger entry into the Dragon Quest series.