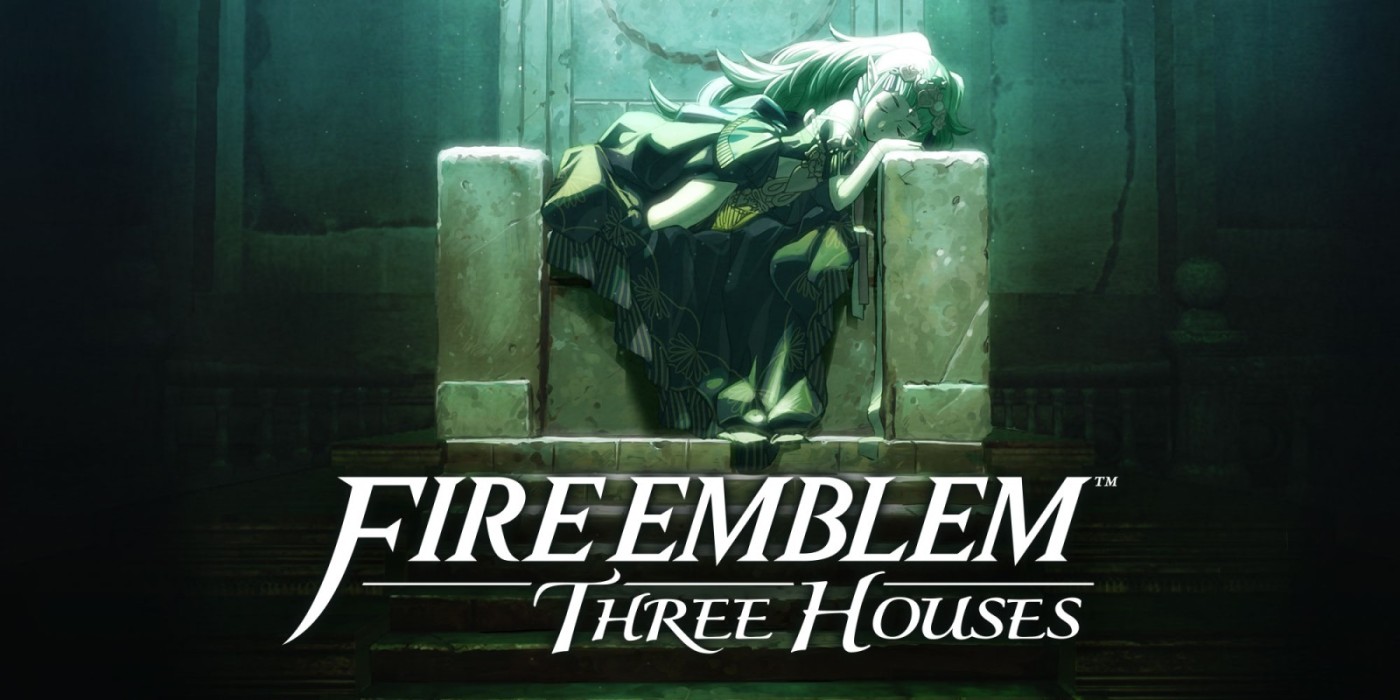 One of the most satisfying moments in a Fire Emblem game is when the credits roll and you see the final outcomes of all of the characters you have fought to preserve over the course of the game. Each of these endings gives a small anecdote about the rest of the character’s life, showing you a bit of how things turn out for them once their adventure has come to an end. I enjoy this technique so much that it’s something I’ve adapted to many of the tabletop campaigns I ran, allowing the players to tell their stories while I describe the final outcomes for important NPCs.

Having played through Three Houses four different times, I’ve collected a number of different endings – for some characters, I’ve even had more than one. Sometimes those endings turned out just as I would have wanted them to – other times, few of the characters I wanted to end up together shared their lives after the war. As I end my coverage of Fire Emblem Three Houses (at least until the DLC comes out), I thought the best way to say farewell to the game would be to share some of my favorite endings from across my playthroughs. I decided to do this as a top 10, celebrating the endings that I enjoyed the most rather than discussing every single pairing.

Since this article will talk about the support conversations and endings for many of the game’s characters, this may be a good one to avoid if you care about spoilers. 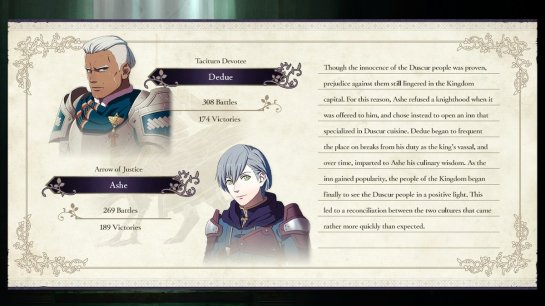 10. Dedue and Ashe
Each of the Three Houses in the game seems to have running themes among a large number of its support converations. For the Blue Lions, those themes include knighthood but more importantly, cooking. Ashe and Dedue are both established to be talented cooks, and their conversations together focus on the cuisine of Duscur, the land from which Dedue hails. Ashe sees the value in Duscur cuisine and helps Dedue to realize that his connection with the food of his culture helps to keep that culture alive. In their ending together, Ashe starts a restaurant after the war which serves only Duscur cuisine and uses that to help repair the relationship between Faerghus and Duscur. This conversation has a good intent but oversimplifies a serious issue in a way that I personally have trouble overlooking, which keeps it at the bottom of my top ten. 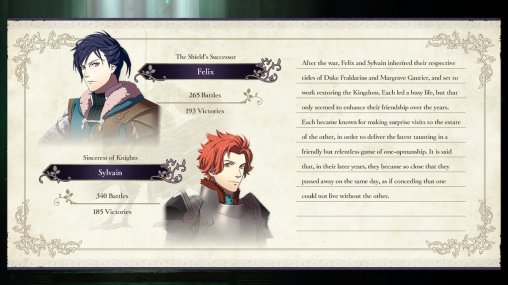 9. Felix and Sylvain
My joke throughout my Blue Lions playthrough was that these kids need a therapist more than they need a professor, and there are few who need therapy more than these two boys. Felix has lots of unprocessed grief from the death of his brother and Sylvain’s misogyny is ultimately misdirected anger in the face of trauma from his upbringing. The idea of pairing either of these characters with any of the women in the group seemed less than ideal, so I liked the idea of focusing on their friendship instead. These two are quite different in their personalities, but despite that they have a history together and truly care about each other underneath their traumatized exteriors. When the credits rolled and they spent their lives competing against each other, that felt like the best possible ending for these two without dragging someone else into their myriad problems. 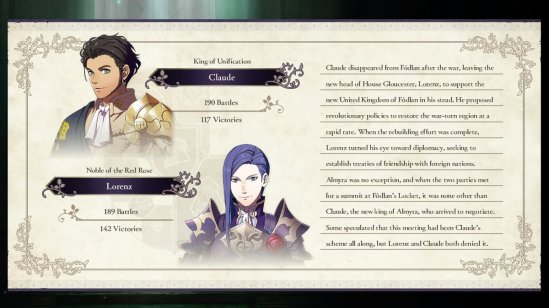 8. Claude and Lorenz
Lorenz is a character that consistently surprised me throughout the Golden Deer run. He’s obnoxiously obsessed with nobility, that much is for sure, but his vision of what being a noble means is a bit more pure than many of the other characters in the game. His distrust for Claude is compelling, and their conversations reveal many of the complicated politics happening within the Alliance. What keeps me from rating them higher is that the ending itself is a bit of a letdown compared to all of the information that came out through their supports – all we learn is that Claude and Lorenz bring the Alliance and Almyra closer together through their leadership, and that Claude was probably planning that from the beginning (which he already reveals in other conversations). 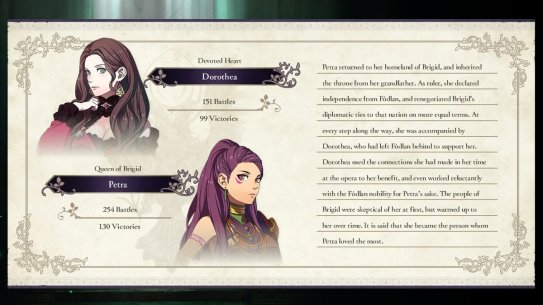 7. Dorothea and Petra
Petra is one of my favorite characters in Three Houses. She’s in an interesting position as a political hostage, and seeing her deal with that to help her country in the end is quite rewarding. Her conversation with Dorothea is a pleasant one in that it gets Dorothea talking about something other than her endless quest for a marriage partner – Brigid’s culture. This conversation gives us the opportunity to learn a little more about Brigid while also seeing Dorothea in a bit of a different light. The fact that their “friendship” (just gal pals, girls being girls, ya know) helps to strengthen the alliance between Fodlan and Brigid is a nice way to end their story. 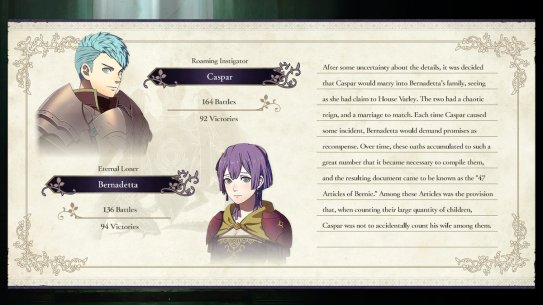 6. Caspar and Bernadetta
Bernadetta’s PTSD at the hands of her abusive father has irrevocably defined her personality, and Caspar is one of the most clueless when it comes to dealing with that in a way that makes sense. Literally picking her up and hauling her off when she’s been mishandled by a man her whole life – yikes. Despite this, Bernie sees through his thoughtless approach to the intent underneath it, and Caspar’s cheery personality does serve as something of an antidote for the pain she has experienced throughout her childhood. She’s patient with him and helps him to understand the right way to approach her, and he listens and learns. What keeps these two out of the top five is that despite the sweetness of their actual supports, their ending together is pretty silly. 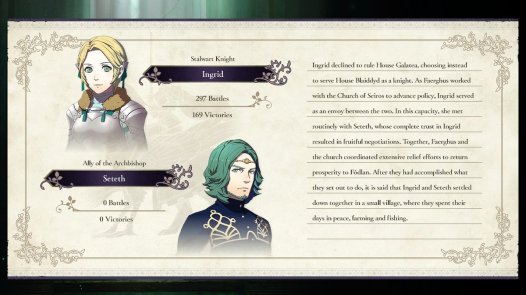 5. Ingrid and Seteth
Ingrid is perhaps my favorite character in the Blue Lions. Her struggle between pursuing her own dreams of knighthood and the feeling of loyalty to her father for the sacrifices he made for her as a child is a relateable one. Seteth helps to guide her through that struggle, and their conversation together is the most like a teacher actually helping their student. Through this conversation we see a very different side of Seteth – he’s not only wise and a good mentor for Ingrid, but he also has a much healthier view of the crest system than many of his fellows in the church, particularly Rhea. He encourages Ingrid to be the knight she truly wants to be and reminds her that gratitude to her father and sacrificing her individuality are not the same thing, and that if her father truly is a good man, he’ll hear her out. What puts this conversation at the bottom of the top five is that it is subsequently ruined by putting these two together as a couple – their relationship worked much better as a mentor-mentee arrangement, and shoving Ingrid with a man is exactly the wrong ending for her character arc. 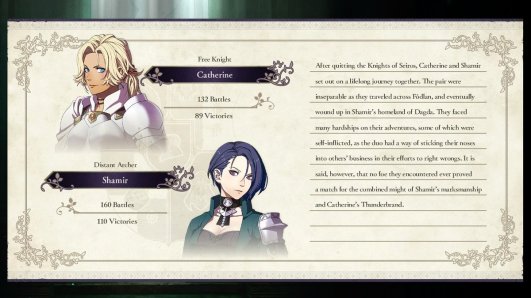 4. Shamir and Catherine
The first time I laid eyes on Shamir, I felt that I had met the character I most wanted to pair Byleth with. She’s got a cool design, a mercenary personality, and kicks ass on the battlefield. Once her conversations with Catherine began, it became clear that I needed to change my plans. These two are partners who fight together for the Knights of Seiros, but their reasons for serving are very different. During their support conversations they learn to navigate those differences and respect their unique motivations. It’d be nice if this game would recognize WLW relationships for characters other than Dorothea and Edelgard, but since the whole Golden Deer run uses “take a lifelong journey together” as a pretty obvious euphemism I think we can safely say that these two end up together! 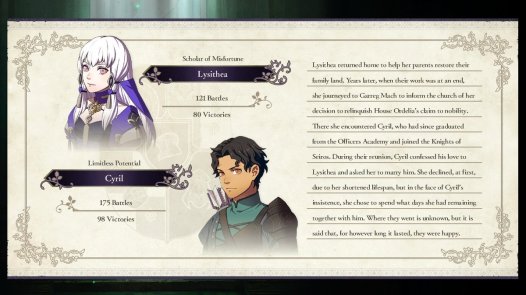 3. Lysithea and Cyril
Not every conversation has to be about heavy topics like war or childhood trauma. For Lysithea, much of her dialogue is focused on her singular drive to make as much of her shortened life as possible. And Cyril has the worst case of Stockholm Syndrome ever recorded in a Fire Emblem title. Yet when brought together, these two are united by something quite different: literacy. Lysithea teaches Cyril to read and write in a series of charming conversations that slowly reveals an adorable infatuation between them. As two of the youngest characters in the game, their relationship is appropriately portrayed as puppy love but is allowed to blossom into something more during their character ending. While many romances in modern Fire Emblem titles seem forced, these two felt like they had natural chemistry and their flirting through reading and writing was absolutely precious. 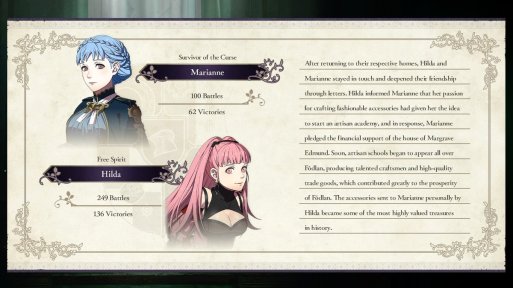 2. Hilda and Marianne
Marianne was a character I knew I would like right away – Hilda was someone I expected to hate, but who ultimately endeared herself to me over the course of the game. Marianne deals with a crippling self doubt that leads to suicidal ideation; the girl literally prays for death every night. Hilda is a spoiled brat who rewards people who do things for her with overwrought verbal praise. But hey, affirmation is exactly what Marianne needs, and Hilda helps to build her blue-haired friend’s rather limited self esteem. Yet another pair of ladies who have great chemistry but no official acknowledgement of their relationship, I’d like it if these two ended up together but even if they technically don’t, seeing how Hilda helps Marianne to cope with her depression and seeing how Marianne helps to keep Hilda grounded is more than enough to put these two in the number two spot. 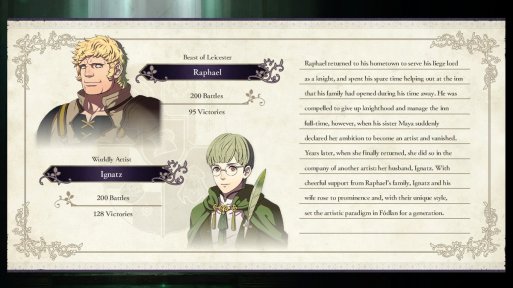 1. Ignatz and Raphael
Most of the content in support conversations stays pretty well limited to the conversations themselves. Occasionally you’ll see a little flash of something elsewhere in the game, but for the most part the interactions between two characters are significant primarily to those two characters. Ignatz and Raphael are different. These two were best friends as kids but when Raphael’s parents died, Ignatz felt a degree of personal responsibility because they were traveling in place of his parents. This guilt leads Ignatz to distance himself from Raphael, who wants nothing more than to still be friends with his best pal. But that’s just one layer of the way these two are interconnected. We learn in their paralogue together that Raphael’s parents were actually victims of the political machinations of Lorenz’s father, who was trying to take leadership from Claude’s grandfather. In many other support conversations we learn of Ignatz’s love of painting and Raphael’s affection for his little sister. Turns out that Ignatz loves to paint because a drawing he showed to Raphael’s sister made her happy! The layers of connection between these two and the other characters in the Golden Deer are multifaceted, and seeing their friendship restored and then strengthened by becoming brothers-in-law is a fantastic ending to their arc together.

Those are my favorite endings in Fire Emblem: Three Houses, but the game has so many different outcomes that I haven’t seen yet. I’ve essentially only gotten one ending per character (except for a few Church of Seiros members), so there’s a good chance that as I learn more endings I may find different ones that move my list around. If you’ve got a favorite ending that wasn’t shared here, feel free to tell me about it in the comments below!

One thought on “My Top 10 Character Endings from Fire Emblem: Three Houses”