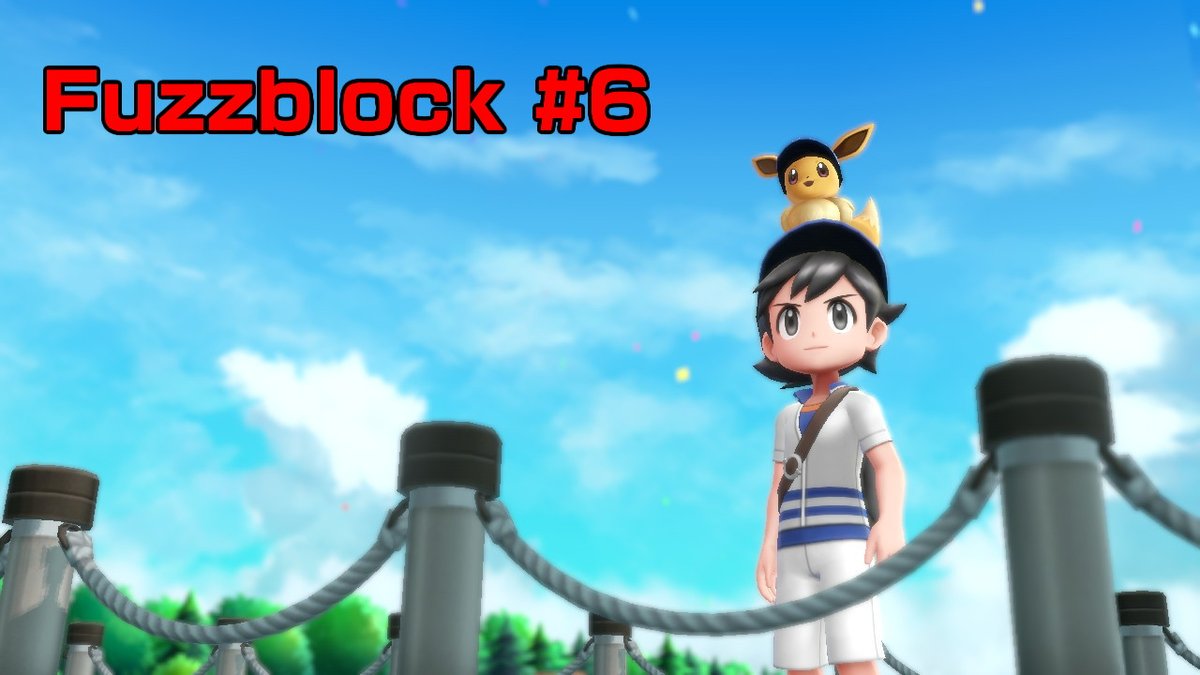 Well adventurers, I’m finally returning to the world of Pokemon in the next chapter of our Fuzzblock adventure! While for you it has only been a week since my last update, for me it has actually been more like two weeks since I actually played any Pokemon, and I’m feeling a bit rusty after diving so deeply into the world of Fire Emblem. Luckily, last time we built up our team and did some grinding, so we should be ready for whatever the game has to throw at us this time around. The first order of business is to explore the SS Anne, a cruise ship which appears in Vermillion City and contains the key to the gym there.

As you walk up to the SS Anne there’s a sailor standing at the entrance to the ship who will give you a sailor’s outfit if you talk to him. It’s effectively your same clothes but in blue and white, so it’s a nice way to change up your color scheme if you want to. Now when looking at the structure of the SS Anne, it is divided into three distinct levels: the first floor where you board the ship, a basement level accessible from the right side, and then a second floor that you reach from the left side. The second floor is where you need to go to progress there story, but what’s important to consider here is that the SS Anne is a temporary location: once you get what you need and leave the ship, the items and encounters that were possible here will disappear. To maximize your experience and your item intake, you’ll want to explore to the dead end in the basement first and then make you way up to the second floor after that.

Note that when you first enter the ship, the first door on the right houses a woman who will heal you up for free whenever you ask. Healing tools like this are really helpful but can also remove some teeth from the challenge of the game – decide for yourself whether or not you want to use this resource to help you deal with the challenges on the ship. Most of the Pokemon on the SS Anne average around level 18, and the hallway in the basement features a large number of trainers with water type Pokemon. If you didn’t catch or have lost your grass or electric type Pokemon you may have to take this section more carefully. For my part, I have Thorn the Weepinbell so these fights were all a joke.

Despite having a full and somewhat balanced team, most of these little ones rarely see action. Grave can handle most Pokemon thanks to his resistances, and the types that he can’t deal with are generally good fodder for Thorn. There are some sailors on the SS Anne who will bring out fighting types, and against those Pokemon I’ll bring Sonny in for battle. You’ll notice that the various trainer archetypes generally have themes to the Pokemon in their team – gentlemen, for example, tend to have Fire type Pokemon. Fortunately I have both Lucy and Grave to cover me in that department.

Once you’ve fully explored the basement level, you can head up to the second floor on the west side of the SS Anne. The stairs put you on the northeastern side of the second floor, and the shape of this level loops around by heading west, south, and then east again so that you’ll hit your destination on the other side of the wall where you’re starting out. Be sure to check all the rooms here to fight trainers and find items. There’s a staircase on the west side that leads to the deck, and there are a few trainer battles you can fight here. Once you’ve cleared the deck and return to the second floor, you’ll want to make sure that your team is fully restored before you reach the eastern stairs. Why, you may ask? What other reason than to battle your rival, of course!

Tackle shows his face here and battles you with a team pretty similar to the one he had in Cerulean City. As always, he leads with his Pidgey, but this time that sucker has evolved into a pesky Pidgeotto on level 20. He’s also got a level 20 Oddish, and his Pikachu is level 21 at this point. Since his team is pretty much identical at this point, your strategy won’t have to change much to defeat him unless you’ve had significant losses on your team. Pidgeotto won’t have much it can do against a rock type, a fire or flying type will easily clean up Oddish, and a ground type or grass type will be able to mount an effective defense against Pikachu. Grave won two of these three matchups pretty easily, and as his reward, he finally evolved!

After defeating your rival, you’ll be able to head to the Captain’s Quarters to learn the Chop Down move for Eevee. Fuzz was very excited to be able to actually contribute since Block isn’t letting him battle during this Nuzlocke run. A note about meeting the captain: this is the point that shuts off the hostility for all the trainers on the ship. If there is anyone you haven’t battled yet, they won’t fight you anymore after this point. So be sure to finish up all the fights on the SS Anne before meeting with the captain. Once you’re done here you can head back outside, but it might be a good idea to drop by the healing room first because there’s one more potential battle before the gym.

If you’ve played Pokemon Sun and Moon, you might recognize trial captain Mina standing on the dock. She’s visiting Kanto from Alola and talking to her will initiate the offer of a battle. If you accept, Mina will face you with her level 21 Jigglypuff and level 22 Mr. Mime. These are both fairy types, which means hitting their weak points is gonna require a steel or poison Pokemon to bring to bear. Keep in mind though that Mr. Mime is also psychic, which is super effective against poison. Mr. Mime also has the psychic move Psywave, which does random amounts of damage on impact. You definitely want to stay healthy during this battle because letting your HP drift too low could cost you a Pokemon on a Psywave high roll. I used Sonny to give me some resistance against Mr. Mime’s other attacks and healed whenever my health was around half. The reward for beating Mina is mainly a large amount of money, so she is skippable if you don’t want to take the risk here.

With your rival and Mina now taken care of, you can proceed to the Vermillion Gym. Chop Down is the only requirement for getting inside, so there are no special restrictions on the Pokemon in your team this time around. The Vermillion Gym is legendary for how much of a pain in the buttocks the gym puzzle is: one of the trashcans here has a switch, and once you find it you have to find the second switch on the first try or the entire puzzle resets from the beginning. Two notes on solving this sucker: one, the second switch will always be in a can adjacent to the first switch. Two, you can save-scum after finding the first switch so that you can simply reset the game if you get the second one wrong. This saves you from having to look for the first switch over and over again, and limits the number of trashcans you have to worry about because there’ll at most be only four possibilities.

There are three trainers in here who have Pokemon right around level 22. A couple of warnings for the trainers in the gym. First off, watch out for Sonicboom. We’ve discussed this move before as an attack that always does a set amount of damage – if you’re not paying attention to your health, Sonicboom could put one of your Pokemon in the ground pretty quickly. The other thing to watch out for is Self Destruct. There are two Voltorb here which know the move. Self Destruct is a powerful normal type attack which has a base power of 200 – that is significantly more powerful than many of the moves you will have encountered at this point, stronger even than some of the super effective attacks you might have endured. If you’re not using a Pokemon that resists normal, this move can easily decimate most of your HP, meaning that if you’re not fully healed you could be losing a Pokemon. This is particularly true if you are using the ground type Pokemon Diglett to try and give yourself an advantage against electric – Diglett has low health and defense and will take a minimum of 75% from Self Destruct from a Voltorb of comparable level and investment. Your best odds here are if your ground type is also a rock type (Graveler or Onix), which will reduce the damage from Self Destruct by half.

Now then, for the gym leader himself! Lieutenant Surge has three Pokemon in his team: a level 25 Voltorb, a level 25 Magnemite, and a level 26 Raichu. Voltorb and Magnemite should be relatively straightforward as long as you keep in mind the advice from the gym trainers. Stay at a high health in case of Self Destruct and watch out for Sonicboom. Supersonic can also be a concern with Magnemite, as the confusion status is a pain to work around during combat. Raichu, as a fully evolved Pokemon, will present much more of a challenge. Thunderbolt will absolutely wreck any Pokemon that doesn’t resist it, so if you don’t have a ground type option consider using a grass type to give you some protection. Keep in mind that if your ground type is also a rock type, Raichu carries Double Kick and can use that to deal supereffective damage. Double Kick will also pose quite a threat to Diglett, who isn’t weak to it but is pretty vulnerable generally (expect to lose 67% of your health to a Double Kick with Diglett). In my case, Grave proved pretty effective, as Double Kick hurt but not enough for a two-hit KO, and Dig did a pretty significant amount of damage to Raichu. This wasn’t quite as difficult as the Misty battle for me, but I can imagine that Raichu would present a problem in the wrong circumstances. Be vigilant!

I managed to take down Lieutenant Surge without any casualties, and so far I have been blessed not to lose anyone throughout the course of the Nuzlocke challenge. Things are certainly picking up in challenge level, though, and there are lots of tricky obstacles coming up in the next few chapters. Next time we’ll explore Diglett Cave and Rock Tunnel to reach a new part of Kanto, so look forward to continuing the adventures of Fuzz and Block next Wednesday!