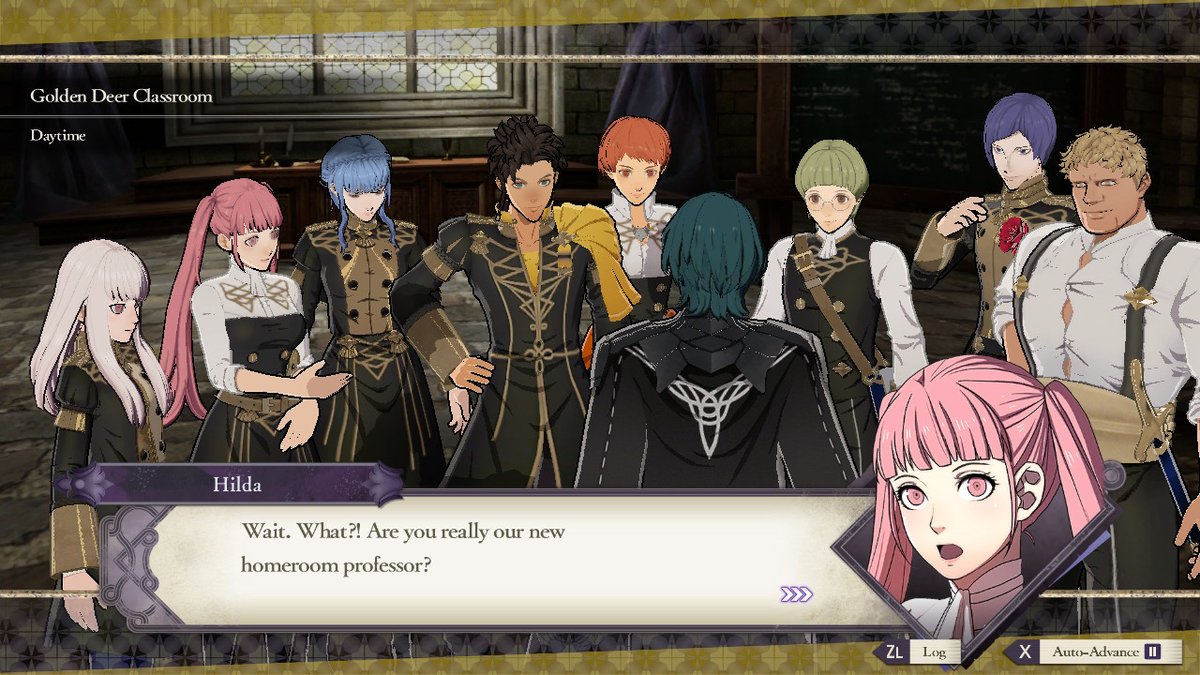 This article features minor spoilers for the first three chapters of the Golden Deer route of Fire Emblem: Three Houses.

Last Friday I shared a post discussing the degree to which I was still struggling with the house choice in Fire Emblem: Three Houses. After objectively comparing the three as best as I could, it seemed as if each one really had something going for it and there was no one clear best choice. But like choosing a restaurant when your partner says “where are we eating tonight?” eventually you have to make a concrete decision. The house choice comes quite early in Three Houses – you have a quick battle in the prologue and then immediately set about meeting all of the students and deciding which ones you will teach.

The ultimate tiebreaker for me came down to the house leaders themselves. Because the player character Byleth (I named my character Isaac instead) is a silent protagonist with no truly defined character traits, I reasoned that the leader of the house I chose would essentially be my main character in Three Houses. With that in mind, choosing a house meant choosing the protagonist that I would follow throughout the course of the game. When I thought of it from that perspective, the choice became obvious – Claude’s snarky attitude and cunning nature immediately drew me to him. He seemed like a fun and interesting guy that I wanted to learn more about.

Three Houses does give you time to meet each of the students before you choose a house but in retrospect, you’ve seen so little of the kids at that point. These characters are more than your first impressions of them, and there’s nothing to point at their true nature and history until you join a house and really dig into the support conversations. As a result, while I was hyped about Claude being my house leader I experienced less excitement about many of the kids I’d be working with. Nobles like Lorenz and Hilda seemed quite boring and stereotypical, and Ignatz came across as the very tired “nerd boy” trope. Mechanically I wasn’t too excited about my choices either – compared to the personal skills of characters like Bernadetta, Ashe, or Mercedes, Raphael’s luck-based healing and Lysithea’s weapon EXP boost during battle felt sub-optimal.

It didn’t help that your first battle featuring your new students takes place before you actually start teaching them anything. Almost immediately after becoming a professor your class is signed up for a mock battle with the other two houses, and at this point the only two characters with any combat experience are Claude and your protagonist. Your first combat impression of most of these characters will be based on whatever weapon or spell they were handed right in the beginning, and not every character is going to excel in that opening battle.

I initially wanted to focus the most on the characters I was actually interested in from a personality perspective. The mock battle forces you to use Byleth and Claude, and you can pick three more students to accompany you. I first chose Marianne, Raphael, and Leonie – Marianne’s healing magic seemed like it would be helpful, Raphael is a good-natured guy who I thought would play like a tank, and Leonie is spunky and appeared to be a good balanced unit. As the mock battle began, I grumbled at the way in which this three-way fight actually plays out as a two-sided one: the Blue Lions and Black Eagles ganged up against me instead of fighting each other as well as me.

It didn’t take me long to learn that not every character is created equal in the early phases of the game. Some of it was simply learning that certain weapons or tools didn’t work how I expected them to. The gauntlets, for example, function like brave weapons in other Fire Emblem games by allowing you to attack twice for every one attack action you would normally take in combat. But it turns out they only work that way when you initiate that attack – if the enemy attacks you on their phase, your gauntlets only hit once. This meant Raphael’s somewhat decent damage output on his turn was turned into a pittance on the defense, and despite his high health he didn’t tank damage as well as I expected. Marianne, one of the two ranged attackers on my team, had terrible accuracy with her Nosferatu spell and even more terrible speed. As soon as the Blue Lions archer Ashe came at her, he immediately shot her down with a pair of arrows.

One restart later, I decided to cut Marianne from my party entirely and subbed in Hilda instead. Now Hilda may appear to be a spoiled brat at first glance but when I first saw her swing an axe, I realized that appearances can be deceiving. Hilda deals impressive damage with her blows and the Smash combat art is a helpful aid when her accuracy is less than desirable. Leonie played much as I expected – somewhat quick, decent strength, and enough defense to take a blow or two without me having to panic. And when I took on Ashe with Claude instead of Marianne the difference was night and day – instead of taking nine damage twice, I took four damage once and quickly put Ashe in his place.

Once you finish the mock battle you finally start getting the opportunity to instruct your students and develop their skills in the way you wish, and this for me is where Fire Emblem felt as if I hit the meat of the game.

I’m a sucker for character optimization and strategic class changing, and Three Houses offers that in spades. Once you unlock the ability to instruct your students it opens up quite a few strategic options for you. I’ve used different approaches with different characters. With Igantz, for example, I’m developing his ability with two separate weapon types: the sword for melee and the bow for ranged attacks. This gives him two weapons worth of combat arts and allows him to be dangerous in melee or at range. For Lorenz, I kept his default focus of lances and reason so that he could have a melee weapon as well as black magic spells to offer him ranged attack options and a way to circumvent high defense enemies.

For multiple characters, I chose to focus on a single weapon while also developing a side skill like authority, riding, or heavy armor. Claude for example has access to unique classes like Lord which require him to either master swords or authority. I want him to stick with bows, so I can focus on authority instead to increase his power with battalions and still allow him to be a lord without the sword focus. Raphael and Hilda both have good potential in heavy armor, so I often pair them together to do the weeding group activity to practice their heavy armor skill while they wait on being able to access a class that actually uses armor.

Some of my favorite skills are ones called “budding talent.” A character’s budding talent is a skill in which they don’t appear to be particularly gifted. However, if you continue to instruct them in that skill and they steadily gain more experience in it over time, they can actually unlock greater potential with the skill and even learn a special ability not normally granted for that skill. Marianne, for example, has a budding talent in lances (indicated by three stars next to the skill when instructing), and focusing hard on that skill allowed me to unlock a special combat art where she uses dexterity instead of strength to deal damage to foes.

Once I started teaching characters a few new skills and had the opportunity to unlock their budding talents, the team started to feel much stronger. My fragile magicians became killing machines – particularly Lysithea with her many potent dark spells – and characters that I originally dismissed like Igantz and Lorenz soon found their roles within the party. Battling regularly with the characters has the additional bonus of unlocking support conversations between them, which helps to flesh out the seemingly one-note personalities that they appear to have when you first make the house choice.

Lorenz struck me initially as haughty in a boring way but his noble pride actually creates some interesting tension within the house, particularly between himself and Claude. Lorenz is actually fishing to become the head of the Leicester Alliance instead of Claude and so constantly pushes himself to improve his skills as a leader and to prove himself as the superior noble. Then there’s Ignatz, who seems like a stereotypical nerdy kid but actually has a dark history with Raphael that has strained what was once a meaningful friendship between them.

Some characters may be precisely what they appear, but there’s a context you’re missing until you get into support conversations with them. Leonie, the dedicated pupil of your character’s father Jeralt, admires him not just for his strength but because he treated her as an equal instead of dismissing her as nothing more than a poor village girl. Marianne displays many symptoms of depression, with her quietness and distance from the others resulting from a sense of self-loathing in which she believes she makes the lives of the people around her worse. And then there’s Hilda, who styles herself a vulnerable flower but in reality is strong of arm and wit.

As I type this article I am eagerly awaiting the opportunity to finish up chapter three of Three Houses. I’ve done my exploration and instruction for the month and changed all the classes of my students to finally begin teaching them new abilities. I’m very happy with my house choice – I originally went with the Golden Deer primarily for Claude but I’ve quickly grown protective of all the kids in the house. The more I train each of their individual skills and customize them to my preference, and the more I learn about their histories and their relationships, the more attached I become. The structure of Three Houses does an excellent job of increasing your investment in the characters in your party using both the storytelling and the mechanical elements of the game.

One weekend in and three chapters down, I’m deeply enjoying my time with Three Houses so far. If you picked up the game over the weekend I would love to hear your initial thoughts as well. Do you feel you chose the right house for you? Are you enjoying the gameplay and character customization? Let me know your thoughts in the comments below, and look forward to more Fire Emblem coverage here on Adventure Rules each Monday until I finish with the game!

5 thoughts on “My First Days with the Golden Deer”