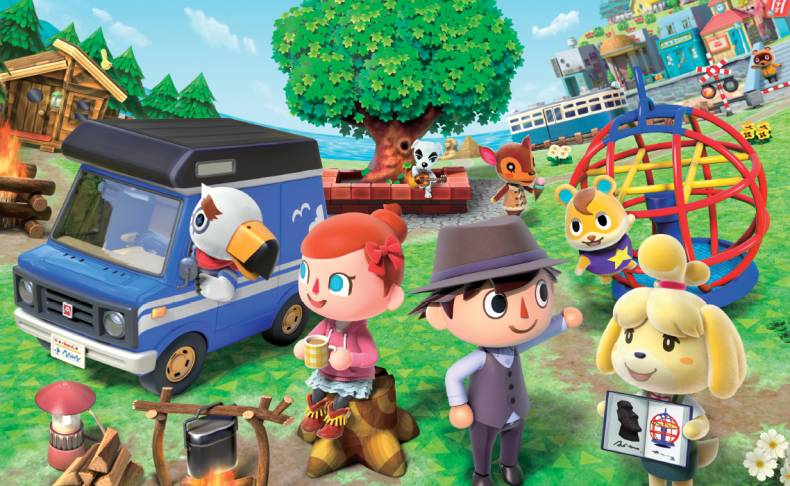 As someone who did not play Animal Crossing until last year (sort of), there was one thing I knew about the game way before any of its other mechanisms. Whether it was through conversations with other gamers, posts I saw online, or cartoons like this gem from Brawl in the Family, I’d heard the legends about what happens when you stepped away from your village for too long a time. Lost villagers, overgrown weeds, cockroach hordes – for a game that supposedly is about relaxation first and foremost, it sounded like the message of Animal Crossing was “play me constantly – OR ELSE.” This pressure to continue playing – along with some of the other real-time mechanisms of the game – are actually what led me to depart from New Life after I got pretty invested in it last year.

Fast forward to one week ago. Things have been pretty crazy for my family for about a month. After starting a new job I’ve been traveling like crazy, causing my wife and child to miss out on time with me and restricting their opportunities to get out of the house since we only have one vehicle. It’s particularly difficult because my son is in the midst of potty training and dealing with a medical condition which requires him to wear an eyepatch two hours a day for the next three months. My wife has her own medical problems to deal with, and it seems like everyone in our family has had some kind of accident. In my state of being emotionally overwhelmed I decided to play something as calm as possible, and that brought me to Animal Crossing despite my anxiety that my village would be in shambles.

I started up the game and was reminded that I named my village Sad Town – talk about on-brand. Isabelle then loaded up my game and made a quick comment about how I’d been gone for such a long time. After making a vaguely threatening statement about how I should never leave again, she gave me the freedom to return to the village and once again I watched my character walk out the door of his little house and began to make my way around the village.

I started out the way I’ve always started out when playing Animal Crossing – walking east from my house and shaking trees, hitting rocks, and watering flowers as I go. It was time-consuming work as all of my fruit trees had fruit ready to pluck, and it seemed like every empty tree had bees in it. Half my flowers were dead (though I think they can be restored if I water them enough) and all around them there were weeds growing. I could tell it was going to be a significant effort to get everything back in order.

Then I met a villager and started a conversation with them. The little fella commented on how long I’d been gone. Hilariously, I stopped playing nine months ago, so everyone keeps referencing a nine month timeframe and I feel like I left to have a baby. At any rate, Isabelle charged this person with weeding while I was gone, and now of course the weeds were out of control. They asked me to do the weeding in exchange for them telling me how many were left while I worked to make it easier. This initiated a minigame where a timer displayed as well as a count of my remaining weeds. I ran around the village plucking every weed I could find and spent just over seven minutes clearing every one of the buggers away. When the minigame was over, I got a piece of furniture for my trouble.

“Okay, that’s not too bad,” I thought to myself, “they made the weeding a cute little minigame with a prize so it would suck less. I can appreciate that.” New furniture in tow, I headed back to my house to place it and encountered the second punishment for my nine-month absence: cockroaches. One of the little buggers was hanging out in my living room. I walked over to where it was and discovered that I could actually get rid of them by stomping their annoying little heads, complete with a Pikmin-style cockroach ghost floating away. I walked upstairs to see if there were any more and stepped on another one. I went back downstairs, placed my furniture, changed the wallpaper, and then went upstairs to change that wallpaper too. There was a third cockroach there when I arrived, so I gave it a quick stomp and was rewarded with a little dance and a message that there were no pesky cockroaches left.

Once the weeds were gone and my house was in order I returned to the task of picking fruit and banging rocks for money. I quickly learned that I didn’t remember any of the controls and so fiddled with buttons and menus until I finally reacquainted myself with how to quickly switch tools without opening the menu, which tools allowed me to interact while holding them and which ones I had to put away first, and how to shift my perspective to see things that were blocked by the environment. Once I had a full inventory I jogged over to Re-Tail to get paid. When I walked into the store, the owner introduced me to her husband, a character I had not met before during my previous time with the game. He enabled me to make changes to furniture I give him, so now I had a brand new tool for customizing my home that wasn’t available to me the last time I played.

At this point I started talking to other villagers around town to see what they had been up to during the nine months. Everyone was freaking out about how long I’d been gone, and everyone had dealt with it in different ways. One villager just assumed I was dead. Another one left snacks out for me at night time like I was a stray cat or Santa Clause or something. Still another thought I had been in the village the entire time and was just avoiding her, specifically. It was funny seeing everyone’s justifications for my absence, but what I did not encounter at all was anyone who wanted to leave because I had been gone so long.

When I reached the town hall a flashing screen outside caught my attention. It was the machine for rewarding my initiatives, a mechanism I’d completely forgotten about. Initiatives are challenges presented to you by the game that, if met, give you coupons which you can exchange for money or furniture. I’d already fulfilled an initiative without meaning to, and upon checking the others I noticed another one I could meet pretty easily – donate 10000 bells to a public works project. Since I already had over 10000 bells from my collecting efforts, all I had to do was find my current public works project and donate in order to get the coupons. The other initiative gave me something to focus on for the next few days that I play the game:

In what ultimately came out to an hour or so of play, I had addressed every obstacle that arose during my absence from Animal Crossing. I relearned the controls, pulled the weeds, stomped the cockroaches, appeased the villagers, and in return Animal Crossing gave me a few quick goals to get me focused as well as rewards for re-engaging with the game. Based on what I knew from other players I expected my return to Sad Town to prompt me to restart the game entirely, or perhaps to pass on Animal Crossing in favor or something else. But of all the games I have left and returned to, this one is perhaps the best at getting you back up to speed.

Think of the last time you tried to return to a story-based game. How much of the narrative had you forgotten? Did you remember anything at all about the quest you were in the middle of? I have some large RPGs I’ve never actually completed because I felt compelled to restart every single time I returned to the game after a break. Some games have a journal you can review to remind you of your current objectives and to bring you back up to speed on everything that’s happened, but some of the story beats have likely lost their impact thanks to distance.

Even other simulation games have been struggles for me in this regard. Going back to Harvest Moon after a break is something that I quickly learned was a deeply frustrating endeavor. In the early days of Harvest Moon you slowly build a farm up from nothing, learning to engage all of the game’s mechanisms one piece at a time. When you start in the middle after a break, the game expects you to be prepared to keep up with everything you built up six months ago. Instead of relaxing, you’re scrambling all over the farm to remember where all your crops are so you can get them watered. And that secret recipe you were working on for the harvest sprites? Turned out while you were trying to figure out what the hell was going on, you wasted the last day of summer and now you have to wait a whole in-game year for the key ingredient to be available again.

Compared to those experiences, jumping back in to Animal Crossing has been a breeze. It truly is a calming game that gives me a break from the stress of daily life, and now that I know it won’t ruin my virtual life when I need to take a break, I think I’ll be a lot more inclined to revisit it from time to time. My hope is that New Horizons does even more to welcome back players who decide to step away when it is finally released on Switch, growing on what New Leaf already does quite well.