When I saw the first teaser for the Detective Pikachu film, I knew in my heart that I was doomed to suffer through another lousy video game movie. Ryan Reynolds wouldn’t be able to break the curse. Despite my belief that the movie bombing was a foregone conclusion, I still felt a desire to see it. I imagined it would be a “so bad it’s good” kind of situation where it would give me enough to laugh at that it would be worth a viewing. I could go with some friends and we could all make fun of it together, perhaps. Then the movie came out and the rumor spread all over the internet: this movie was actually good.

Naturally good and bad are matters of opinion when it comes to films, but enough folks were spreading positive buzz that I decided to check out Detective Pikachu for myself. It helped that Destiny, the woman to whom I am married, had already seen the movie and enjoyed it enough to want to accompany me to my first viewing. I went into the movie with low expectations but an open mind, and ultimately I enjoyed my experience with the film. While I felt that some of the main characters had a pretty weak acting performance, the film was funny and did some interesting things when it came to showing Pokemon just living their lives. Seeing how the abilities of Pokemon would be applied in the day-to-day reality of life is something I’d always wished they’d explored deeper in the games, and Detective Pikachu did so in a way that I thought was clever and fun.

Then came the Pokemon Direct, where it was announced that a new Detective Pikachu game would be coming to the Nintendo Switch. I’d heard positive reviews about the first game, and now fresh off of the film I was more curious than ever about the title. All of this Detective Pikachu content so close together ultimately led me to purchase the game in order to try it out for myself. So far I’ve played three chapters of the game, enough to share my first impressions of a title that has consistently defied my expectations.

So what is Detective Pikachu? If like me you’ve seen the film but not played the game, you’ll find that the basic premise is the same. A young man named Tim Goodman has traveled to Rhyme City to find his missing father, Harry Goodman. Harry was a detective whose partner was a Pikachu, and Tim meets that Pikachu and discovers that the two of them can comprehend each other. With Tim able to speak with humans and Pikachu with Pokemon, the two of them team up to discover the mystery behind the disappearance of Harry Goodman – which Pikachu has conveniently forgotten due to some serious amnesia.

My first expectation as I booted up the game was that the watching the film first had ruined me for the game. I figured that I already knew all the story beats and that I’d basically be replaying all of the scenes I had just watched on the big screen. That has turned out not to be the case at all. In fact, the first three chapters of the game only vaguely resemble some of the themes of the movie. They take place in radically different ways, with different characters, and different Pokemon to meet and mysteries to solve. I expected to be bored early because of the overlap between the two, but the Pokemon company did a good job of differentiating the two in significant ways.

One key difference is Pikachu, whose sense of humor reads a bit differently than that of Ryan Reynolds. Reynolds is known for a particular style and that style works for his Detective Pikachu. The one we see in the game reads as being older and more grizzled, a brooding noir detective but with some silliness thrown in for good measure. One of my favorite scenes so far was a random treat I received by clicking on the button for speaking with Pikachu in which he tried to use Quick Attack. This involved him getting hunkered down to run, stumbling forward a few steps, and then breathing heavily from exhaustion. It’s a lot of fun to see this adorable and normally very spry Pokemon in such a different light, and there’s a simple humor to having the gravelly detective voice emerge from that tiny yellow body. 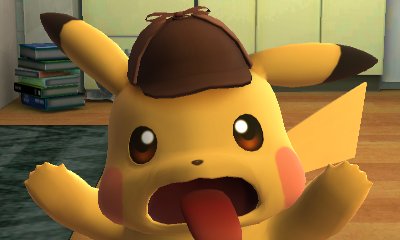 When it comes to gameplay, Detective Pikachu is quite the departure from the typical Pokemon formula. It is a spinoff, after all, so we cannot expect the mechanisms to be the same. Detective Pikachu is an adventure game at heart. Playing as Tim, you move around in different environments examining your surroundings for clues, which are stored in your case files. At any given time you’ll have a mystery to solve using the various clues you are collecting. These mysteries can be nested into each other, requiring you to solve two or three smaller mysteries in order to piece together the bigger puzzle for the chapter. This creates a satisfying progression as you have lots of small goals to work toward while making incremental progress towards your main goal for the chapter.

There are a few different ways you can get clues from the environment. There are multiple points in the world with which Tim can interact, with some areas featuring the ability to zoom in closer and examine multiple objects one by one. You’ll always see a prompt if you’re looking at an area which can be interacted with, so generally investigating a room will involve walking around that space looking for prompts, then selecting them to see what kinds of clues you find in that spot. Not everything that you can interact with gives you the sorts of vital clues that go into your case notes, but irrelevant points still generally contain interesting information or a funny dialogue.

Speaking of dialogue, communicating with other characters in the world is your second major source of information. People and Pokemon both have lots of things to say about the cases going on around you, so talking to them gets you lots of helpful information. You’ll have specific conversation topics to bring up with everyone at the scene, and asking multiple people and Pokemon about the same topic is generally the only way to gather all the clues you need in order to progress. While Tim can talk to humans directly, all Pokemon dialogue is translated from Pikachu’s perspective. He rarely translates verbatim and instead just provides a general summary of what the Pokemon intended to convey. 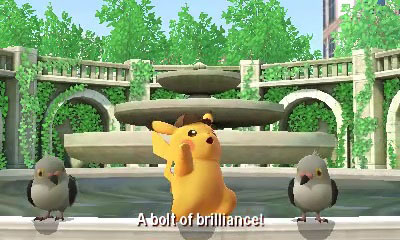 Once you have the clues you need to solve your current mystery, you open up your case file and select the puzzle you’re working on. Pikachu then walks you through it, presenting the questions you are trying to answer along with a selection of the clues you’ve gathered. You drag and drop the clues to their proper place within the questions in order to piece together the answer to the mystery you are solving. It’s a simple system that so far for me has not presented any challenge, but the moment of realization is still fun even if it comes well before the point when you actually solve the puzzle.

As an example, in the first chapter you try to recover a stolen necklace for a young girl, and at one point you learn that a Burmy was seen at the scene of the crime. The Burmy was a grass cloak form, but none of the grass cloak Burmy nearby had the necklace. The clues at the scene include a pile of leaves and an overturned trash can, as well as signs of the other Pokemon involved in the incident. An experienced Pokemon veteran may very well know that Burmy has three possible forms, and a trash cloak Burmy is one of the available options. Making this connection helps to lead you to the true location of the missing necklace.

It’s worth noting that the game gives you the resources to solve every puzzle even if you have no experience with Pokemon previously. Multiple puzzles in chapter three require specific knowledge of the typing and habits of various Pokemon. The game gives you everything you need to know in order to understand and solve these puzzles, so even total newbies to the Pokemon scene could still work their way through them. This is good design and I sometimes find myself wishing I knew less so that I could experienced more surprises, but instead I get the joy of recognizing when a Pokemon I know and love is going to be featuring in a case soon. So I’d say it evens out. 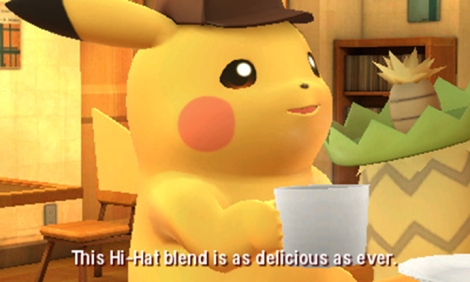 So what does Detective Pikachu offer those who aren’t into adventure games? Not much, as it were. There are little action scenes throughout each chapter but they focus on quick time events. These events generally just involve pressing the A button when a white circle falls into the range of a yellow circle, or mashing the A button enough times in a row. Detective Pikachu isn’t about action – it’s about exploring and seeing the Pokemon world in a new way, and enjoying the fun interactions with your unique Pikachu companion. Those who love narrative-driven games will find a lot to like here, particularly if you are already a Pokemon fan and you enjoy games with a quirky sense of humor.

I keep expecting to be disappointed by Detective Pikachu, but so far I have been consistently pleased. The titular character is funny, the game is quite different from the film, the mysteries are fun (if simple), and the pleasure of seeing different Pokemon in unique environments and situations never gets old. I’ve still got plenty to play before I can render a final verdict, but based on what I’ve experienced so far I am excited to dive further into the mysteries of Detective Pikachu!