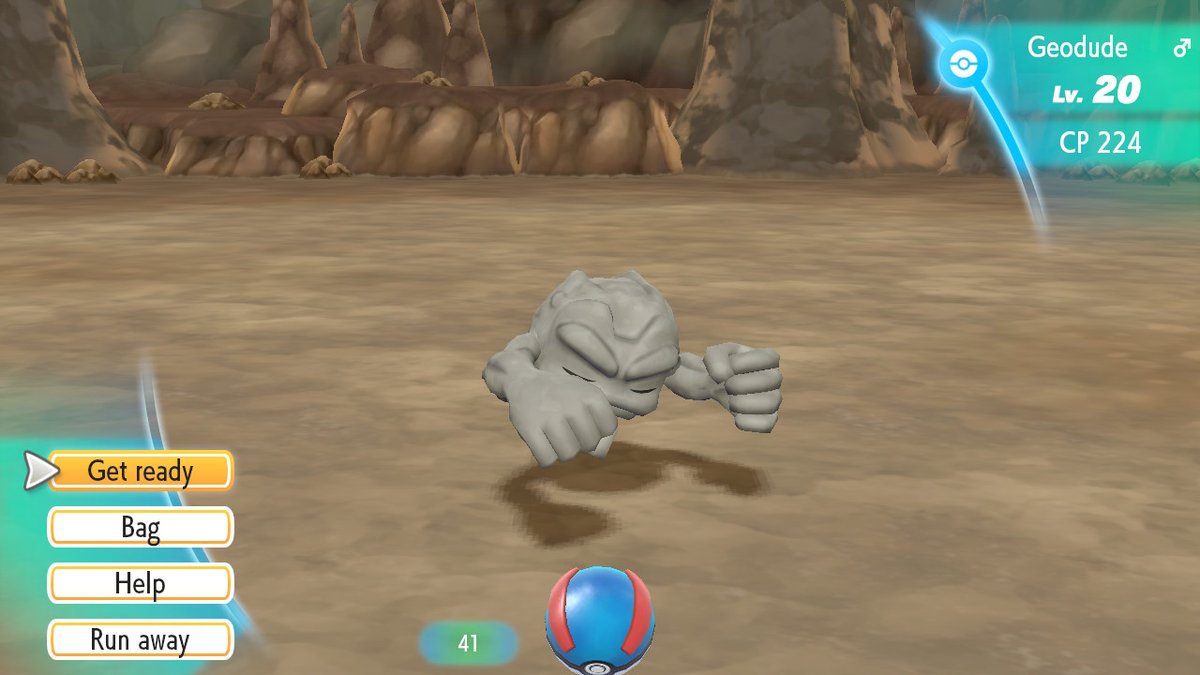 “Gotta catch ’em all” has been the tagline of the Pokemon series since it’s inception back in the 90’s. The games are focused on hundreds of collectible monsters that can be traded between trainers at will. In each game your adventure hook is the filling out of the Pokedex, an encyclopedia which contains data on every Pokemon in the region. Capturing is a key part of the Pokemon experience; it is both your main quest and the primary tool in your arsenal for becoming stronger in order to progress the story. For me, capturing has always been one other thing – a serious pain in the fanny.

I don’t like capturing Pokemon. There, I said it. It’s out there in the universe now. The process of throwing a Pokeball at a creature in order to try and add it to my party is not something that is enjoyable to me. I don’t hate it, but for me it has always been a necessary evil in the Pokemon experience. I enjoy it the most when it is the least emphasized: the Nuzlocke challenge, a self-imposed hard mode where you only capture Pokemon once per new location. Conversely, I think the increased emphasis on capturing Pokemon is a big part of why Let’s Go is not resonating with me the way other Pokemon games have in the past.

Today I want to take some time to ponder on why Pokemon catching fails to capture my enjoyment. I’ll look at the various ways that Pokemon has handled it over the years, with a particular emphasis on the differences between Let’s Go and the main series. I also want to talk about other monster catching games and how they handle the acquisition of creatures for your party to see if there is any game out there that can capture my heart when it comes to this type of gameplay.

Let’s focus first on how capturing works in the main Pokemon series. When in battle against wild Pokemon, you can throw Pokeballs at them in order to attempt to capture them. If the catch is successful, that Pokemon joins your team. If the catch fails, you can keep trying until the Pokemon runs away, is defeated by your Pokemon, or defeats your Pokemon. Lots of different factors come into consideration when it comes to catching Pokemon, factors that you have some degree of control over in order to make your experience easier.

Pokemon with low health are easier to catch than ones at full health. Inflicting a status condition also lowers the difficulty of capturing Pokemon, with some conditions making it even easier than other ones (sleep helps more than poison, for example). The Pokemon’s overall level and its species affects capture rates too, with a level 2 Rattata being a much easier target for your Pokeball than a level 25 Rattata, and with Lugia being harder to capture than Rattata in nearly any circumstance. Finally, the type of Pokeball that you use has an affect on your chances, with certain types having unique advantages based on the environment or time of day.

Having so many factors that you can manipulate means that for most standard encounters, you can make it pretty simple to capture the Pokemon you are trying to get. Lower its HP bar to a red sliver, hit it with a status condition like paralysis, and use a specialized Pokeball like a Dusk Ball to greatly increase your odds and you can catch most Pokemon you encounter in the wild. Where you’ll find issues are in the early parts of the game when those resources aren’t available to you, and in the later parts of the game when attempting to capture unique Pokemon that you can only encounter one time.

Hunting for legendaries is easily my least favorite part of the main series of Pokemon games. Legendary Pokemon break all the rules when it comes to capturing. You can get them to low health and hit them with status conditions and use special Pokeballs against them, but their catch rates are so low that it none of it matters. It’s a normal experience to be attempting to catch a legendary Pokemon and for it to instead kill itself by running out of moves and using Struggle, damaging itself to take away that last sliver of health. Catching most Pokemon feels like a science with just a bit of randomness thrown in – catching legends feels like trying to win the lottery, and it’s aggravating.

Let’s Go takes this already potentially frustrating formula and makes two significant changes. The first change is that capturing is a much bigger part of Let’s Go than it is in the main series. Capturing Pokemon is your primary method of gaining experience points as well as useful candies which increase the stats of your team. If you don’t capture Pokemon frequently, you won’t be able to hold your own in combat. There are also certain barriers which require you to have specific types of Pokemon or a specific number of Pokemon in order to progress. For example, you can’t fight Brock if you don’t have a Pokemon that is water type or grass type, and the three starter Pokemon are mainly attainable by capturing a certain number of Pokemon first. With a bigger emphasis on capturing, the hope would be that they at least make capturing easier to accomplish, right?

Wrong. Let’s Go takes all of the tools that give you control over how difficult a Pokemon is to capture and removes them from you. Since you don’t battle wild Pokemon, you can’t reduce them to a state where they are easier to capture by lowering their health or inflicting a status. You can feed them berries to help you, but the effects of berries only last a limited amount of time and they don’t stack. So for example, if a Golbat is giving you trouble because it has a difficult capture level and it is moving around too much, you have to make a choice between getting it to sit still and reducing the capture level. And if you fail for some reason – like the motion controls misreading your gesture or the capture just plain doesn’t happen – you have to spend another berry and another Pokeball to try again.

The outcome of this decision is that capturing is more random than ever, making it more frustrating even when just capturing Pokemon casually on routes. I’ve had multiple encounters where a Pokemon broke out of a Pokeball after an “Excellent” throw only to get captured on a throw with no bonus ranking at all. The awkward controls have led to many Pokeballs being accidentally tossed too high or too wide when the target was sitting still, let alone when the stupid things are moving all over the place. Even playing in handheld mode doesn’t help much, as the center of the screen may be just a tad lower or to the left than you expect and your ball lands outside of the ring you’re supposed to hit. By making capturing more of a hassle and more of a necessity, Let’s Go has quickly become my Achilles Heel within the Pokemon franchise.

To say that this problem is unique to Pokemon would be a bit unfair. Recruiting monster allies is something that occurs in multiple RPG series, and while Pokemon certainly handles it in a less-than-ideal way sometimes, those other games may get it even worse. Take, for example, Dragon Quest V, where you have no control at all over whether a monster joins your side or not. You simply defeat them over and over again and pray to the goddess that at some point one of them will decide that they want to be your friend because you pounded their face in. Or there’s Tales of Symphonia: Dawn of the New World, which requires you to spam abilities of the same element until the field’s elemental affinity is identical to that of the monster you want to recruit. If your AI allies mess up and use a spell of a different element, or one of your enemies does, then you can kiss your monster buddy goodbye.

I think for me, the more randomness you have to deal with the more frustrating capturing becomes. That’s why I prefer the classic Pokemon approach to the Let’s Go approach: I have a lot more influence over whether or not I will successfully catch the Pokemon. There’s something that I as the player can do in order to increase my chances of success. In one game I’m aware of, recruiting monsters to your team is not a matter of chance in any way, and this is perhaps the best approach to satisfy my particular preferences when it comes to capturing. That game is Persona 5.

In Persona, enemy shadows can be recruited to your side as additional persona for the protagonist through a method called negotiation. Negotiation is initiated during combat by hitting every enemy on the field with their weaknesses. This can be done individually or all at once, if they share a common weakness. Once every enemy is in a dazed state, you have the ability to execute a powerful finishing attack, hold the monsters up to steal money or items, or negotiate for their services. Negotiation is only possible when you are powerful enough, but that’s the only real requirement.

The process of negotiation involves answering a specific series of questions from the monster. Each shadow has one of a select list of personalities, and based on their personality they enjoy different types of answers to their questions. Some want straight answers, others jokes, still others prefer vague responses. Whatever their preference, if you demonstrate that your personality is compatible with theirs, they’ll join you as a persona. If you miss out on recruiting a particular monster because you answered the questions incorrectly, you can try a different combination of answers the next time you encounter the creature.

Because everything about this capturing mechanic is something that can be identified and controlled by the player, there’s nothing truly random about recruiting a persona to your side. I think this kind of approach could be helpful for Pokemon, too – if the whole point of the game is to “catch ’em all,” why make catching them something that happens on a roll of the dice? Having the capture mechanics be a puzzle with a specific solution still has a fail state, but once that fail state is overcome the player can definitely capture the Pokemon they want instead of doing all the right things and still coming out empty handed.

I’m curious to hear your thoughts, adventurers. Do you like how Pokemon handles capturing? Do you prefer it in the classic series or in Let’s Go? Do you agree that they could stand to learn something from the way that other games incorporate their capturing mechanics? Let me know in the comments below!

10 thoughts on “In a Series About Collecting Monsters, Catching ‘Em All is My Least Favorite Part of the Game”