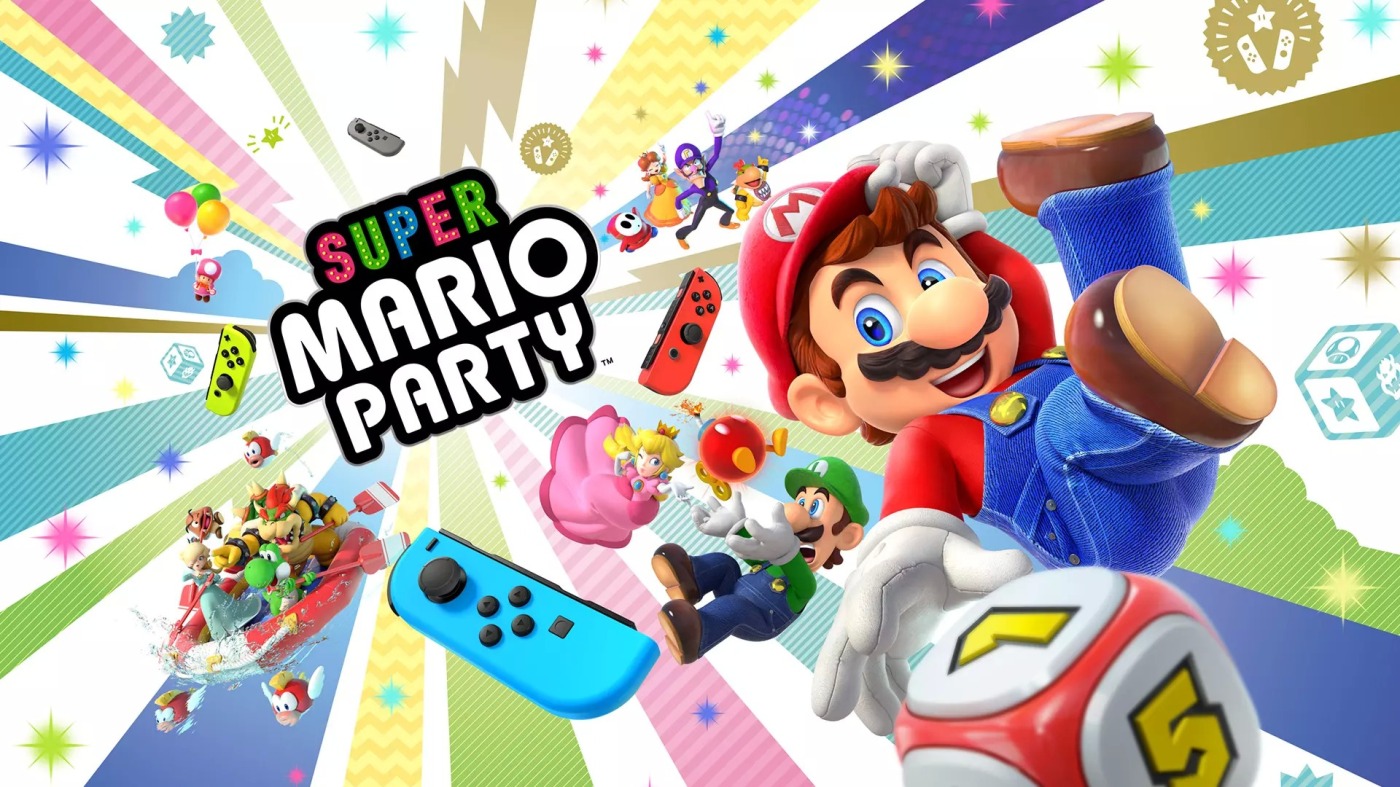 Mario Party has been a part of my life since the first entry in the series. I have many memories of playing the game with my mother, trying to beat her in her best mini-game, Shy Guy Says. I remember the day my children’s pastor came to my house to talk to me about my decision to get baptized, I wanted to rush through the questions so he would come and play Mario Party with me (surprisingly, he did join me for a mini-game or two). As a teenager family nights often involved my mother, stepfather, brother, and myself all sitting around a television, controllers in hand as we dueled in minigames and navigated the treacherous boards.

This past weekend, we celebrated my birthday. I am privileged to have a family with the means to celebrate by giving me gifts, and the package from my mother included a brand new copy of Super Mario Party. As soon as I took it out of the wrapper, I held up the cartridge and said “you know we have to play this today, right?” She smiled and informed me that this was precisely why she got it. We hooked up the Switch, spread the Joy-Cons between my mother, my teenage brother, my seven-year-old sister, and myself, and dove into the world of Super Mario Party.

Super Mario Party feels very much like the older games in the series, with many features being a return-to-form for the franchise. There are boards covered in spaces which grant coins, items, or special events, and navigating those boards to be the first to reach a randomly-selected star space is one half of the main action of the game. Each character takes one turn per round, and one your turn you can survey the board, use an item, and roll a dice block to determine how far you move. You get a beneficial effect or a penalty based on where you land, and once all four players have gone you play a mini-game.

Let’s focus on the boards first. There are only four of them for the main game mode, and of those four we tried out two: Whomp’s Domino Ruins and King Bob-Omb’s Powder Keg Mine. The stages seem small at first glance, but a number of factors work together to make them a reasonable size for a match. First of all, the standard match format is 10 turns compared to 20 for older games. Since matches aren’t as lengthy turn-wise, it makes sense that they cover a smaller space. The smaller boards also work better for the smaller dice rolls – the basic dice block now ranges from 1-6 rather than 1-10. All of this works together to make matches feel more compact and tight, but I never got the feeling that the boards were too small. We could cover the space without making multiple rounds around the entire board over the course of a single game.

Whomp’s Domino Ruins has all of the makings of a classic Mario Party first board: whomps charging you coins to stop blocking off passages, event spaces which trigger traps that send you backwards along the board – it’s everything you’ve ever seen in Mario Party and it feels familiar the moment you step on the board. For me, this familiarity was welcome – I loved returning to a classic scenario and facing challenges I recognized while also experimenting with new mechanisms. Because a long, trapped passage at the top of the board serves as the only way to move from the right side to the left, we only made one complete circle the whole game because someone always landed on an event space which pushed all of the rest of us backwards to the start of the passage again.

King Bob-Omb’s Powder Keg Mine was the second board we played, and this one gets a bit riskier than Whomp’s – although it still feels quite familiar. King Bob-Omb since in the center of the stage, surrounded by event spaces which cause his timer to count down from 5 to 0. When the timer ticks all the way down, anyone caught in the explosion loses half of the coins on their person. To make sure this mechanism works well, the central square where the explosion can happen connects to four different corners on the board, and it’s easy to quickly move from one segment to another by crossing through the middle – and risking getting blown up. Event spaces also have mine carts that transport characters from one corner of the board to the other. Here, counting spaces to avoid ticking down the King’s timer became an essential skill.

There are two resources of significance in the game: coins and stars. Stars are essential for winning the game: whoever has the most at the end of the festivities is the winner of the match. Coins are used to purchase stars, but also buy useful items that help you to maneuver around the game board. Items include mushrooms which either add or subtract from your dice rolls, special dice that roll the number of your choice, or warp pipes that transport you right by the star. Coins are gained on blue spaces and lost on red ones.

There are lots of space types on the board. Blue spaces give coins, red spaces takes them. Lucky Spaces give you a fun bonus like coins or items, while Bad Luck Spaces can take or redistribute your hard-earned money. Item spaces give you beneficial items while ally spaces add another character to your party, giving you a bonus of 1 or 2 to all of your dice rolls as well as giving you their special dice block to roll. Special event spaces unlock all kinds of interesting effects depending on the board and the space’s location on the board. Much like the boards themselves, none of these spaces feel unfamiliar to veterans of the series.

The main focus of any board is the star space. Toadette serves as the purveyor of stars, which she’ll gladly part with for a measly 10 coins. The low price makes it easy to pick up a star and change the face of the game – in my two games played with this particular version of Mario Party, a dramatic last-minute turnaround seemed more possible than it ever did in older games. During our first game, my sister went from fourth to first place by obtaining three stars in the last two turns – firmly unseating our brother (the middle child of the family) from what he thought was a totally secure victory.

To speak about Mario Party without speaking about mini-games would be strange indeed. Mini-games are played after each player has had one turn of movement around the board. This means that in a 10 turn game, 10 mini-games are played. These games can pit two teams of two against each other, challenge one person to defeat a team of three, or have all four players compete in a free-for-all. In the past, mini-games were often all or nothing affairs which gave 10 coins to the winner while everyone else lost out. In Super Mario Party, many of the 4-player games feature a second, third, and fourth place slot, with only the person in fourth place losing out on coins in most cases.

The mini-game screen has combined practice mode and the rules explanation all into a single tight experience. Before a mini-game starts, you can practice the controls while reading a description of the goal of the mini-game. This allows you to quickly try out the game and then jump right into the match without having to slowly maneuver from a practice screen when you’re not familiar with the game you’re playing. Like the smaller boards and lower turn count for a standard game, this contributes to an overall feeling of Super Mario Party being much tighter and more efficient than previous titles.

The mini-games themselves are fun and seem to utilize the Joy-Con functions in interesting ways. Most games generally relied on gyro controls or button controls, and involved very simple commands that made the games accessible to both my seven-year-old sister and my Switch-newcomer mother. This isn’t to say the mini-games are all easy or uncomplicated; some of the puzzles were tricky and took us quite a few practice rounds to get the gist of what we were doing. In two games we played different mini-games every time. To my understanding, there are eighty, so since we played twenty without repeats we experienced one quarter of the full mini-game selection in around two hours of play.

When it comes down to it, Super Mario Party feels similar to earlier titles in the series, but with enough small twists on the formula to keep it from feeling like a carbon copy. This over-familiarity could be off-putting to series veterans who want the series to try something new and different, who feel that the Mario Party experience has become too same-y over the years and should be overhauled completely. However, for me, that classic gameplay is exactly what I wanted, and it brought me back to a time when I had fewer concerns.

As we played, my sister and I formed an alliance of sorts against our brother. I gave her a guiding hand as she navigated the experience of playing Mario Party for the first time in her very young life. My brother and I exchanged jabs and I laughed in triumph when his luck turned sour on the boards. When my sister won a mini-game after struggling initially, she’d happily high-five our mom and me as she jumped up and down with glee. I sympathized with my brother’s plight as he won nearly every mini-game we played and yet never placed first after the final tally – a situation I often found myself in when I was playing at his age. I imagine that as my mother watched these scenes play out, her mind was flashing back to the same memories mine was. I got multiple great presents for my birthday, but being able to share a family moment like that in the midst of my current struggles was the ultimate gift.

This article only captures my earliest impressions of Super Mario Party. I haven’t yet engaged the single player or tried out the other modes. I haven’t played every mini-game or unlocked all of the hidden things this title has to offer. Perhaps when the dust settles, I will look back on this game and find it unremarkable, a title which changes just enough to be new while holding so tightly to series conventions that it feels familiar the moment you pick up the controller. However, that familiar ground is exactly where I needed to be this weekend. I now have one more memory of sharing a fantastic time with my family around a Mario Party game, and that by itself has value. For a few shining moments, I wasn’t stressed or angry, worried or insecure – I was just Ian, playing with my siblings and my mom like the real world and all of its problems were a million miles away.

3 thoughts on “For a Brief Moment, Super Mario Party Made Me Feel Like a Kid Again”