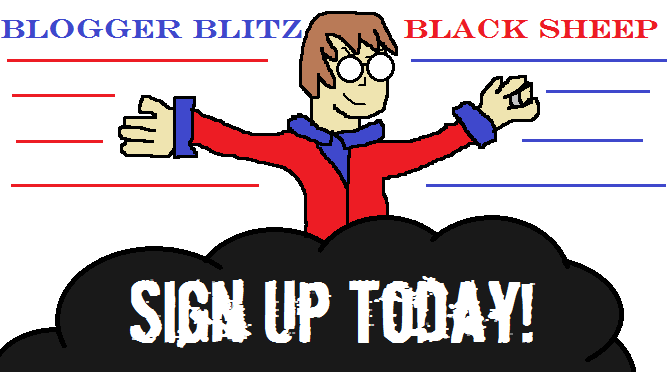 Greetings, fight fans, and welcome to the sign-ups for the second annual Blogger Blitz competition. This year is all about changing things up from the original Blogger Blitz. Like infamous sequels such as Super Mario Bros 2, The Adventures of Link, Fire Emblem Gaiden, and more, we’re changing the game from the formula that put the competition on the map in the first place. As such, this year’s tournament is subtitled Black Sheep. This week, we’re gathering together the bloggers who wish to become a part of Black Sheep and make it a reality.

Here are the basics. Blogger Blitz is a single-elimination tournament where eight competitors (or possibly eight pairs of competitors) will sponsor a character from a video game, specifically a villain. Black Sheep is all about the bad guys! These villains will then compete in wacky events, events that this year were designed based on suggestions from the adventurer community. After each match, a group of judges will converse together about which villain they believe earned the right to fight in the next leg of the competition. This will ultimately culminate in a championship match, where the winning villain(s) will be crowned the Blogger Blitz champion and earn some sweet, sweet bragging rights.

Thanks to those of you who submitted ideas and voted for events during the months of May and June, the events are all ready. What we need now are competitors to complete them, and judges to judge them. Today’s post is your call to action, your opportunity to sign up for this community event and become a part of the Blogger Blitz challenge. So what do signing up entail, exactly? Let’s dive into each role in more detail so you can get an idea of exactly how you want to be involved in Black Sheep.

COMPETITORS
Blogger Blitz: Black Sheep will be a single-elimination tournament with eight spots on the bracket, meaning we need either eight or sixteen competitors. As a competitor, you would choose a villain from a video game to submit as your character for the tournament. Characters are claimed on a first-come first-served basis, so be sure to check the sign-ups to make sure that someone before you hasn’t already chosen the villain you wanted. After that, I will hold a random drawing where fighters will be paired up for matches and the events they compete in will be decided.

You compete in a match by writing a blog post about how your villain would complete the event for that match. There is no required format, so go nuts – in the past we’ve had short stories, lists of pros and cons, and even songs submitted for the competition. I only have two rules: that your submission is written (this is a blogging contest, after all), and that you credit me as the creator of Blogger Blitz and link your opponent’s blog. If enough bloggers sign-up for each match to consist of two pairs, you and your partner will be responsible for working on your post together and submitting one final product for the competition (again, linking each other’s blogs). How you share the post between you is up to you – my only recommendation is that both of you share the post on your blogs, with some sort of addendum that the post has a co-author and was written for a community event. Each round of the competition will have a word limit: round one will be 500 for singles and 800 for doubles, round two will be 800 for singles and 1200 for doubles, and round three will be 1200 for singles and 1600 for doubles. If you win your match, you go on to the next round. If you lose, you’re eliminated from the competition.

At maximum, as a competitor you will contribute three posts to the competition. You’ll always have a minimum of one week’s notice to have your next post scheduled, and last year I was pretty consistent about giving folks more like nine or ten days. Posts from competitors always go up on Mondays. These posts will be pretty spread apart with the only tight turnarounds being the transition from round one to round two, and the transition from round two to round three. That is to say, competitors who win matches get busier as the competition goes on. Ultimately, though, the role of competitor isn’t too time-intensive. You can do your part and then sit back and watch what’s going on with the rest of the competition. You might want to choose competitor if the following apply to you:

JUDGES
The judge role is essential in making Blogger Blitz unique as a competition. Having one person (who is also the host and creator of the event) be responsible for determining who wins the tournament isn’t as fair as having a group of people work together to objectively choose the best post submitted. Black Sheep will have three or five judges on a council to determine the winner of each round. Judges don’t write posts – instead, they have a conversation together to determine who they believe won the match and share their reasoning with me. I as the host then take on the responsibility of creating a results post to announce the winner of each match.

Judges have more responsibility and a tighter turnaround than the competitors do. The general schedule will look like this – on Monday, each competitor will post their submission to the match. By Thursday afternoon (based on my time zone, so let’s say 5 PM EST), the judges need to have made their decision. That effectively gives you three days to read two posts and then to come to a decision with the other judges in the council. The judge role is busier than the competitor role, particularly during round one, but there are built-in breaks between rounds so you get a week off. Judges start out busy but their duties get lighter as the competition goes on. You might want to choose judge if the following apply to you:

THIS SOUNDS GREAT! SO HOW DO I SIGN UP?
Signing up for the Blogger Blitz: Black Sheep is easy! All you have to do is leave a comment on this post with which role you want, which video game villain you are sponsoring along with an alternate in case it’s taken (only for competitors, of course), and your blog’s Twitter handle, if available. I use my Twitter a lot to communicate quickly during the competition and to do stuff like hold live drawings and share the posts of competitors. Last year, Twitter had all kinds of fun stuff going on with friendly smack talk between competitors and attempts to playfully bribe the judges, so it’s a great place to be if you want to really be engaged with the community during the Blitz.

As I stated earlier, I am looking for either eight or sixteen competitors, and three or five judges. That means I’ll be accepting eleven, thirteen, nineteen, or twenty-one bloggers total to participate in the Blogger Blitz. If we end up in a situation where we don’t have quite enough to get to the next threshold (for example, only sixteen people sign up), participants will be given priority in the following manner:

So how long will sign-ups last? The comments of this post will be open until Friday night at 11:59 PM EST or we get all twenty-one slots filled – whichever comes first. If you know you want to sign up, you’ll want to do so quickly so that you get a spot claimed within your category – particularly if you’re signing up as a competitor, so you can get your favorite video game villain first! I’d also encourage everyone who is interested in participating to share this post with other bloggers in the community so we can try to hit twenty-one participants and make sure everyone who is interested gets to participate!

So there you have it, fight fans. You know the roles in the competition and how to sign up, so now’s your opportunity to leave a comment and become an official participant in Blogger Blitz: Black Sheep! I hope you’ll join in on the fun and I look forward to seeing what the competition brings this year. The adventurer community has already worked together to make some really cool events for this year’s competition, and I for one think that we are well on our way to making Black Sheep and even bigger and better version of the Blogger Blitz!