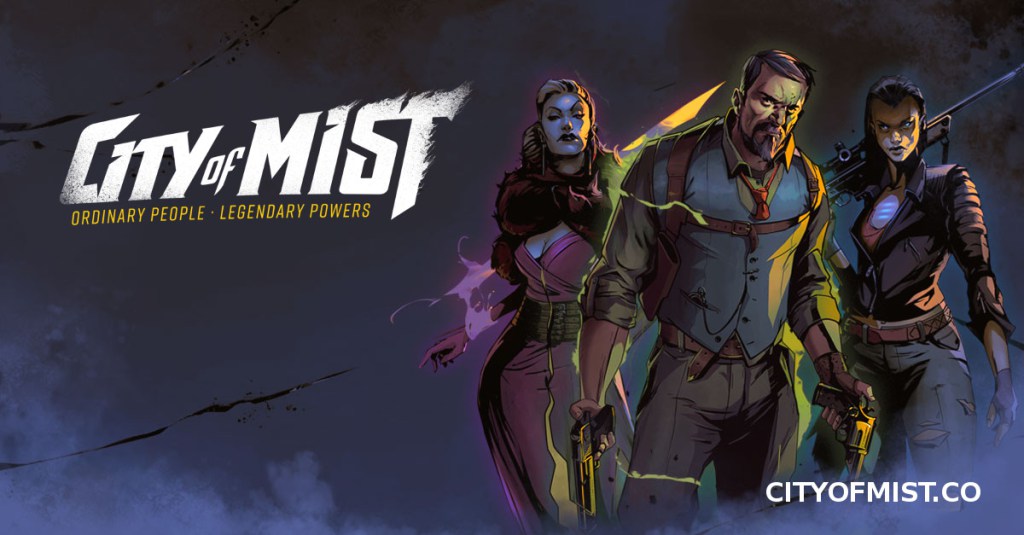 This past Saturday my players and I dove into our second session of City of Mist, a rather new game from Son of Oak that tells of street-level superheroes against a noir background. Because this is our first time playing through with the full rules of the game, we still have a lot of things we are learning about the game mechanics. After our last session, we realized that we were struggling a lot with story tags and juice and so I spent some time reading up on them and working harder to get a grasp of how to implement them effectively in the game. That ended up being a pretty beneficial exercise, so now it’s time for me to do the same with the next aspect of the game we were having some trouble with: burning tags.

Burning tags was an aspect of the game I struggled with when I first played the game using the starter set one year ago. My players used the mechanic as a sort of win button right towards the end of the session, and I didn’t feel that I had the tools necessary to stop that from happening. It was a concern that I voiced in my review and hoped would be addressed in the final version of the game: how can the session or campaign have any dramatic tension when there’s a built-in easy button?

Luckily I had nothing to worry about, and the full version of the game gives the MC the tools they need in order to handle burning tags appropriately. Instead, the problem I’ve found is effectively the opposite of the one I anticipated. I was worried before that burning tags gave the players too much power and the mechanic would be overused. Instead, my players and I all forget about this game mechanic and have failed to engage it over the course of two sessions (with only one notable exception). So today I wanted to educate myself a bit and get a firmer grasp of how to burn tags effectively during play.

So what is “burning a tag,” anyway? Well a tag is a person, place, thing, or quality that a player can invoke in order to help their character succeed. Tags built into the world are story tags while tags built into the character are power tags or weakness tags. The player characters as a group also have crew tags that they can invoke. When a tag is burnt, it can no longer be used in order to increase the chances of success on a roll. This can be described in different ways: the person is exhausted, the place is a mess, the thing is broken, the ability is taxed – there are innumerable fictional justifications for why a tag may not work anymore. But once a tag is burned, until it recovers it has no mechanical value for the players.

Now the big way that tags get burned is that a player can choose to burn the tag in order to unleash its full power. By declaring themselves unable to use a specific power tag until they rest, the player can roll a 7 on the dice with a Power of 3 for their move, for a total of 10 on their roll. This is, in essence, a guaranteed success. So if a player character is facing a particularly important circumstance – a critical investigation they must solve, a powerful enemy to mow down, an impossibly keen eye to sneak past – that player can choose to burn a tag in order to have a guaranteed success in that critical moment.

This is what I was talking about when I mentioned my concern about a win button. When playing with the starter set rules in a standalone session, my players were easily able to succeed at everything they wanted by burning their tags during the final confrontation. They didn’t have to worry about the possible repercussions of burning out all of their abilities because the session was about to be over, and with no tools to limit the power of burned tags (or so I thought) it was impossible to tell them that they had to earn their successes in a more dramatic way.

As I said, this wasn’t the issue we encountered at the table. My players weren’t overutilizing this technique, but rather forgetting it entirely. This combined with some statistically-improbable dice rolls led us to have a session where some players became trapped in a failure cycle they couldn’t seem to work themselves out of. Having the ability to burn tags is an important mechanic of City of Mist because it allows the players to say “this is important enough that I am willing to give up some of my resources in order to succeed.” When not overused, this game mechanic actually adds dramatic tension by helping us to create moments where the hero fires every single one of his bullets into the bad guy, or burns out the last of her magic spells to seal the mystical portal behind her. There’s a desperation to tag burning that adds something interesting to the game fiction.

Luckily for MCs like me who didn’t quite “get it” the first time, the core rules expand on how burning tags can be mitigated during play. Specifically, the positive and negative statuses on a character still affect the final outcome of the move. If Mitosis burns his mean right hook to score a knockout blow against Prospero but he’s suffering from strength-drain-1, then the final power of the move would actually be 7 + 3 – 1 = 9. This is a partial success with a cost rather than a full success, and the Power of the move is reduced so that Mitosis can’t do so much damage to Prospero when he does connect. As the MC, you don’t have to worry about your players “ruining” a big moment by burning a tag, because you are equipped with a very fair and just tool for taking the edge off of that success.

Of course, if you really want to avoid having a player burn a tag, you can just burn it yourself. Whenever a player rolls for a move and misses, the MCs call in that situation can be that the effort poured into the move exhausts the ability to use that tag again. This is a technique that allows opponents to disarm, fatigue, or otherwise disable your players in order to reduce the number of tags they could burn for a success as well as reducing the number of opportunities they have to get pluses on their die rolls. I personally have been forgetting to use this technique, but burning tags is one tool that the MC possesses to make something compelling happen when a player fails a roll.

Imagine for example that Declan Le’Strange is unleashing a barrage of bullets onto some members of the Infection Gang. Declan’s player rolls a 6- on the move, giving me the opportunity to make a move of my own. Now I could have the gang deal a negative status to Declan, but he could then immediately turn around and just spray them with bullets again. This time, he might get a better roll. No, for the gang in the fiction it makes the most sense to disarm Declan so that he poses less of a threat to them. I choose to burn his adhesive foam ammo so now he has fewer tools to use against the incoming attackers. In the fiction, a gang member takes a swipe at him and sends his cartridges all tumbling to the floor, impossible to recover in the heat of battle.

Burning the player’s tags as a consequence for a miss has two effects. The more practical of the two is that the players literally have one less opportunity to shoehorn a success into the story. My group has five player characters who, even at this early stage of the game, have a dozen power tags each to play around with. That’s 60 opportunities for someone to say “yeah, I just want to be instantly successful on this.” Being able to bring that number down is definitely helpful. The second thing is, by burning some of those opportunities when a player misses a roll, you may teach players to conserve their tags for a time when they are truly needed. After all, if both the players and the MC keep burning tags, eventually no one will have any left. So by burning their tags as a consequence, I can teach my players the importance of those tags and help them to use them wisely.

Those are all my thoughts on burning tags for today, adventurers. If you’re playing City of Mist, I hope this is helpful to you in have a bit of a better understanding of how these things work. I know for me, it’s more a matter of remembering than anything else. City of Mist has more rules and mechanisms than a lot of the recent games I have played (Dungeon World, Dread, Ten Candles), so it’s taking me some time to pick up on each one. By focusing on them one at a time, I’m helping myself and my players to slowly develop a better understanding of the game. If you have any advice on burning tags that might help us out, feel free to leave it in the comments below!