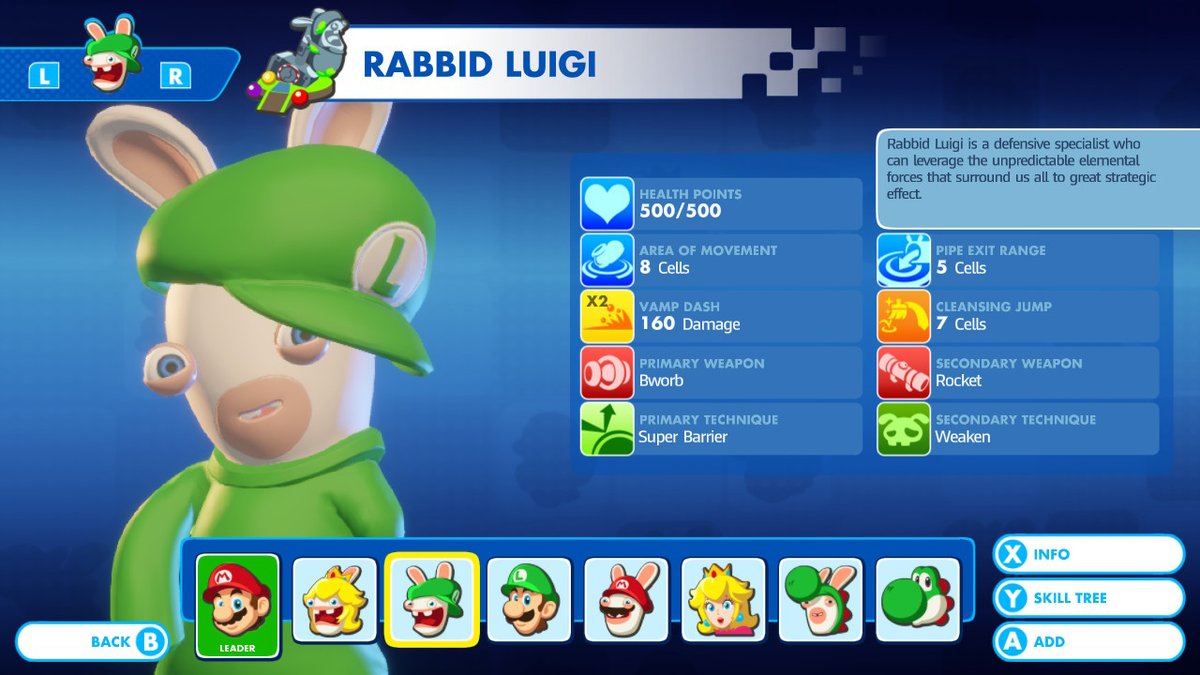 Mario + Rabbids: Kingdom Battle is a unique and fun tactical RPG for a lot of reasons – it has surprisingly deep mechanics despite the simplicity of the system. Beyond that, the character-based gameplay means that each party member brings something unique to the table that makes them more effective in certain scenarios. Choosing the right character for the right mission will take you from “Good” to “Perfect” rankings in your battles and help you to get the ultimate Mario + Rabbids experience. This post will be part of a series where I take a hard look at each character in the game to see what they bring to the table and give you some guidance on the best way to utilize the character.

A few hints about using this guide. Each character’s section will be structured first as a simple point-by-point breakdown of their basic stats, then their weapons, and finally the skills they bring to the table. This is great if you just want to read a quick summary of what the character is good for. Following that will be a more detailed section with my recommended uses for each character. There are mild spoilers in this guide in the form of playable characters and game mechanics, but no story spoilers. These guides will come out one at a time, but I’ll do my best to release them as close together as possible. If the character you are looking for guidance on isn’t up yet, check back the next day!

Without further ado, let’s take a detailed look at the floppy sleeves of Rabbid Luigi!

THE STATS
Health: Medium-Low – Relies on his shield and unique Dash for survivability
Damage: Low – Weapons focus on tactical application over damage dealt
Range: Versatile – Has options for many different ranges, operates best in Medium-Low
Ground Mobility: Medium – Good movement range but not the best in the party
Air Mobility: Medium-Low – Not the worst at team jump but not nearly the best

THE SKILLS
Vamp Dash – Fantastic damage that offers great healing too, best Dash skill for sure
Super Barrier – Best defense against Special Effects, limited damage reduction though
Weaken – Can be helpful but won’t always be able to be part of your strategy

Can we just take a second to appreciate how adorable Rabbid Luigi is? I know that the Rabbids are pretty obnoxious, but this one is different. He stops, drops, and rolls when he catches on fire. His weapon is a yoyo. His sleeves are too long for his arms, people. Maybe my love for Luigi is rubbing off on this weird counterpart, but I really enjoy Rabbid Luigi’s design! Anyway, he’s your third starting character and is described as a defensive specialist, which makes sense given his techniques. But Rabbid Luigi brings some offense and support to the table in a way that makes him incredibly useful to have around.

I cannot talk enough about how great of a skill Vamp Dash is. The ability to deal heavy damage to your opponents, recover health from attacking them, and then for any ally who attacks that enemy to recover health too borders on broken. At the very least, it grants survivability to Rabbid Luigi that he can maintain perfectly well on his own. And since he can dash two opponents, it makes him pretty great at crowd control. Rabbid Luigi clocks in at the highest Dash damage in the game (a whopping 160) and the earlier you max it out the more helpful it is going to be. As late as World 3, 160 dash damage is enough to totally eliminate ziggies and to reduce hoppers and supporters to a sliver of health that anyone can deplete.

The other feature of Vamp Dash which you can upgrade is the amount of health absorbed, starting at around 20% and working its way up to 100% of the damage dealt. Again, maxing this out somewhat quickly is worth the time, because restoring 100% of the damage you deal as health to yourself is an awesome way to heal characters. This ability allows Rabbid Luigi to serve a support and offense role simultaneously, which is a great strategy for matches where you need to quickly finish in order to get a perfect (or challenge matches where you literally have a turn limit).

When it comes to weapons, Rabbid Luigi works differently from other characters. His weapons have low damage scores but high super effect chances, meaning they are more likely to nail the opponent with a debilitating secondary effect like turning to stone, catching on fire, or pushing them around the stage. More than the other characters in the game, Rabbid Luigi’s special effects aren’t centered around two main approaches, so at any point in the game you might be relying on this little Rabbid for a different effect. When you choose Rabbid Luigi, you are essentially trading weapon damage for a useful side effect.

This is further cemented by his rocket secondary weapon, which does low damage at a higher range and is able to strike multiple targets and circumvent cover. This can be pretty great for chipping away at a grouping of Bucklers, or for clearing a cover-heavy area (once your rockets are dealing Medium cover damage). However, the rockets don’t compensate for their low damage by having a high special effect rate like the bworbs, so often these will feel inferior to attacking normally.

When it comes to techniques, Rabbid Luigi is all about the defense. His Super Barrier has less built-in damage reduction than other Rabbid shields but has a valuable side effect: it prevents super effects from enemy weapons. This is incredibly valuable because it means that, when his shield is up, Rabbid Luigi is immune to any effects which would compromise his positioning or prevent him from being able to use any of his abilities. It’s a hard counter to Bucklers, who have guaranteed super effects because of their secondary ability.

Rabbid Luigi’s second technique is more situationally useful – the ability to lower the damage dealt by attacking enemies. Weaken can certainly be a helpful skill when you successfully catch a lot of enemies in its range, and at full power it lowers enemy damage by 70%. This is a pretty significant number and rather than just protecting Rabbid Luigi, it protects anyone who might be attacked by the enemies he weakened. Powering up Vamp Dash and Weaken can be an effective defensive strategy for Rabbid Luigi – he may have to stay close to the enemy, but while there he can drain their health and attack power to leave them vulnerable to his allies.

So what are Rabbid Luigi’s weak points? Vamp Dash is a huge part of what makes Rabbid Luigi such an effective party member, so scenarios that render it hard to use or flat-out useless are definitely times where this Rabbid won’t shine. Bosses, for example, cannot be dashed, and on large stages with a lot of ground to cover Rabbid Luigi struggles to keep enemies close enough to dash them. At medium range, he can dish out some interesting super effects but ultimately struggles to deal much damage. Rabbid Luigi is not an offensive specialist when it comes to his weapons, so he needs a strong offensive partner to help him bring the enemy down.

Mario, of course, is an obvious choice here, as he’s forced to be in the party and focuses exclusively on offensive pressure. Rabbid Luigi and Mario definitely pair well together, as Vamp Dash allows Mario to heal whenever he doles out damage, increasing his survivability when he is close to enemy lines. However, there’s another Mario that makes a good companion for Rabbid Luigi – Rabbid Mario! Also an offensive powerhouse who benefits from Vamp Dash, Rabbid Mario has the added bonus of being able to Magnet Dance enemies out from behind cover. Rabbid Mario can draw enemies out for Rabbid Luigi to Vamp Dash, then whip out his Boomshot or Hammer to defeat the enemies, drain their health, and keep pushing forward. The only thing with Rabbid Mario that you need to be careful about is that his Boom Dash is an area effect, so Rabbid Luigi could end up taking damage if they are dashing the same enemies.

Of course, we can’t let the Marios and Luigis hog all the glory, right? Peach is an interesting partner for Rabbid Luigi because she fills a similar role, defending the party while also adding a degree of support with a specific method of delivering good offense. Rabbid Luigi is crowd control while Peach can deal big damage to a single target, and together they offer different methods of keeping the party healthy without having to actively play the role of “party healer.” Staggering their abilities each turn would be a great way to make sure the party is always taking minimal damage – use Weaken on the enemies one turn and then Protection on your allies while Weaken recharges, and continue the cycle until the battle is won. These two are a strong pair when you are focused on protecting yourself from enemies with heavy firepower – and if this game had “defend a location” or “survive X turns” missions they would really be well-tailored to that!

When looking at mission types, Rabbid Luigi is particularly skilled at “defeat X enemies” or “defeat all enemies,” but not necessarily ideal for “defeat boss.” However, there are some boss fights where he still does well because there is a crowd control element to them – most bosses don’t fight alone so Rabbid Luigi can focus more on their grunts while your more offensive characters deal damage to the boss. Rabbid Luigi isn’t a bad choice for “escort” missions, but at the same time there are better characters whose abilities are better suited to the task. When it comes to “reach area,” he may not have the worst movement range but he is definitely outclassed in both ground and aerial movement by other characters.

Rabbid Luigi is a talented fighter whose Vamp Dash ability allows him to double as more than just a defense expert. He’s great for crowd control and deals heavy damage with his Dash, and he is an excellent defensive character with his ability to ignore Super Effects and reduce enemy attack power. His abilities suffer in boss battles and he needs to be able to get close to truly utilize his best abilities, but Rabbid Luigi is an all around fantastic character to have on your team and one of my favorites in the game.

Adventurers, I hope this guide has been helpful for you! If you have any recommended tactics or a comment about using Rabbid Luigi, please leave it in the comments below for those who might be able to learn from what you have to offer. Stick around this week for more Mario + Rabbids character guides, and I hope you enjoy this fantastic tactical RPG!