I recently got the opportunity to dive back into the hobby of tabletop gaming with most of the same folks I used to play with in college. We’ve been playing Dungeon World, my current favorite tabletop RPG, and this is the first time that I’ve been able to experience the game as a player instead of a GM. That has been a pretty fun experience – I got to pull some pretty neat stunts during the first session and ever since then it has been an epic journey to free the known world from tyranny. I love being a player in my favorite game, but despite picking up the hobby again after such a long time, there’s still a little something missing for me. That something? Other games.

Besides the occasional session of Dread, Dungeon World is pretty much the only RPG I have played for nearly three years. And I love the game – its ease and accessibility is part of why I’ve played it so much during that time. But tabletop RPGs are each a learning experience, teaching you different skills with the unique mechanics they have to offer. By only playing one game for so long, I feel like I haven’t grown as a gamemaster in the way I would like to. There are so many worlds I have yet to explore: I haven’t opened my mind to the psychic maelstrom of the apocalypse, or discovered ancient secrets in a world of unknowable technology. Today I’ll be talking about yet another game I want to explore: Ryuutama.

Ryuutama is a “natural fantasy RPG,” or, as it has been described by pretty much every article I ever read about it, “Miyazaki’s Oregon Trail.” It is a game which focuses on journeying and travel through a beautiful pastoral world. As a tabletop RPG that originated in Japan rather than the west, Ryuutama is pretty different from what one might expect after having a lot of experience with games like Dungeons and Dragons. In my understanding of it so far, it reminds me a lot of JRPG games, particularly Dragon Quest. And the comparison to the works of Hayao Miyazaki certainly seems spot-on as well, which is just fine with me as I have enjoyed many of his films over the years.

Ryuutama is unique in that it doesn’t necessarily focus on characters that are epic fantasy heroes. They could become that someday, but really they are simply traveling from place to place on an epic journey that everyone takes at some point in their life. Behind the scenes, this journey is watched over by a guardian dragon that then feeds the story of the journey to a Seasonal dragon, nourishing one of the great creatures that maintains the balance of the world.

This dragon guide character, called the Ryuujin, is played by the game master. This character levels up and has abilities similar to player characters, but these abilities have a more narrative focus and allow the GM to change the game. This can help or hinder the player as desired, and there are four types of Ryuujin the GM can play as. Green ryuujin tell traditional Ryuutama stories, tales of adventure and questing. Blue ryuujin focus more on companionship and relationships. Red ryuujin tell stories of glorious battle, while black ryuujin tell stories of betrayal and despair. 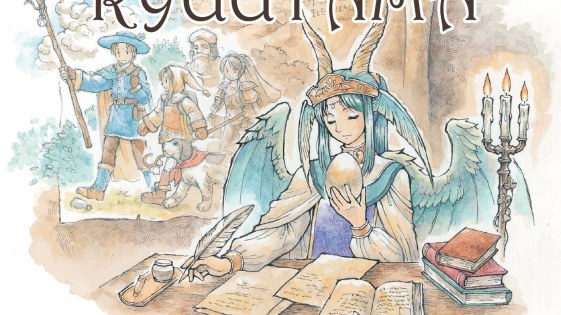 I am really fascinated by this mechanic for a couple of reasons. For one, a GM player character is pretty much universally looked at by folks I’ve played with as a terrible idea. The GM has so much knowledge of what’s going to happen in the game – it’s hard for him or her to play their character without taking advantage of the information they have access to. The other issue that can come up is that the GM spends too much time focusing on their character and playing up their story, making the GM character the “main character” of the game.

The ryuujin works differently than this in a couple of ways, though. The ryuujin is not a party member in the traditional sense, fighting alongside the players and experiencing the same adventure as them. The ryuujin watches the adventure unfold and occasionally interferes in some way with his or her abilities. These abilities are things that the GM for a western game might do as part of telling the story: bringing back a slain character, skipping ahead to a different part of the narrative, making a monster more dangerous than it started out, etc. What’s compelling about this is that these are things a western GM might just “do” – in Ryuutama, you have to buy the right to make these decisions/changes by spending your character’s life points.

The whole thing suggests a very different relationship between the players and the GM than what I am used to, and it’s awesome to see the cultural differences of this game compared to others. The color ryuujin that the GM chooses signals to the players what kind of game (s)he wants to play. Then in order to make a narrative change to the story that isn’t demanded by the dice, the GM has to “buy” that right with points allocated by the game mechanics. This is a more “gamist” approach compared to the “narrativist” approach of games that I personally am used to playing, and that aspect of playing Ryuutama is something that draws me in. What could I stand to learn as a GM from running a game that focuses on mechanics first, and then uses the fiction to explain why the mechanics worked out that way? 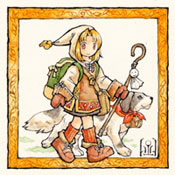 As a player in Ryuutama, you have a lot of different options for customization that will feel pretty familiar to the players of JRPGs. You choose one of seven classes (four of which are recommended for first time players) and then one of three types – attack type, technical type, or magic type. These can be combined in any fashion, allowing for a degree of difference between two characters who share similar attributes. An attack merchant is going to prefer different stats and have a different role in the party from a magical merchant.

“Merchant? That’s a class?” Yeah, Ryuutama changes things up by having more mundane classes than typical fantasy RPGs. You aren’t running around as the world’s mightiest warrior or slinging fireballs with your bare hands. These travelers are ordinary people who are journeying out into the world. As you travel on you’ll encounter many quirky and magical experiences that may eventually lead to you becoming a great hero, but it doesn’t have to be like that. Ryuutama isn’t ultimately about that in the way that other games are. It’s about fun adventures, warm feelings, and the charmingly crazy world we all live in.

Because Ryuutama is a game that’s all about the journey, there’s a lot more focus on getting from place to place and the trials of the road. Every in-game day that you’re on the road, you make checks to determine your character’s condition, how well they travel, if the party travels in the right direction, and if they are successful in making camp. You track rations, manage your travel gear, make maps, and get lost. Often during a day of travel, encounters with other travelers can happen, or maybe even battles against the monsters of the world.

Combat happens on a map much like those present in console JRPGs. You have an ally side of combatants against an enemy side, and each side has a front and back row. Players roll initiative and combat takes place in a turn-based style. Taking damage costs HP, using abilities costs MP, and your initiative doubles as the difficulty of hitting you – going first means you’re hard to hit, and going last makes you an easy target. You can fight using your own skills and weapons or make use of objects that populate the fight environment, objects that are determined by the players and GM before the fight starts.

This shows another side of the game that I think sounds really awesome: community. The players and the GM work together to create many aspects of the game world. You go in a circle around the table before combat in order to populate the battlefield with items. Players help the GM develop the overall setting of the game but also the individual towns that the characters encounter along the way. The dice tell players how well (or not) they traveled, but the players tell the story of WHY they traveled well (or not) in the fiction. I love when RPGs encourage players and the GM to work together to create a great story and the mechanics of Ryuutama very much encourage that.

So what would I do if I got the opportunity to play this game? Where there are some games I’m excited for that I’d really want to experience as a player first, with Ryuutama I am infinitely more excited to GM the game. I love the idea of the ryuujin character and would be excited to see what kinds of abilities I can unlock. I know that realistically in a western RPG I can use many of those “abilities” for free, it’s just assumed I have the power to do that, but I like the idea of earning the right to mess with my players, or spending a little something extra to help them out. I also enjoy how the type of ryuujin I play sets the tone of the story, and that I can change types as needed when the next journey starts.

Since the green ryuujin is the classic Ryuutama GM, I think I’d want to start as that and then branch out after getting some experience with the basic rules of the game. Because some ryuujin abilities outright change those rules, I wouldn’t want to play as those types of ryuujin until I understood the rules better. As for the setting I’d create, I like the idea of doing the classic Dragon Quest style setting, a sort of idealized European medieval period with some potentially anachronistic Japanese influence. The monsters in the game definitely gel with that, although some of them instead have a Ni no Kuni feel – which I also love. This game is so tailored to my tastes in setting and aesthetic that, if the game mechanics similarly impress me, it could very well become my new favorite tabletop game.

If I were to play rather than GM the game, I think I’d want to go with the merchant class. While I’m initially drawn to the idea of the hunter, I feel like that class is pretty close to the typical “fighter” archetype and I’d want to go with something a little different in order to embrace the unique spirit of Ryuutama. I like the idea of being technical type, as it increases carrying capacity (quite important for the merchant!) and also gives +1 on initiative rolls, making me both faster and harder to hit in combat. Most RPGs don’t appeal to me when it comes to magic, but since Ryuutama features primarily spells with more practical purposes as opposed to “how many orcs can I kill at once with this lightning bolt?” I’d also consider playing as a magic type character.

Well adventurers, that’s all I have to say about Ryuutama for today! Have any of you played this game? Did you enjoy it? Got any advice for my eventual first time? I’d love to hear your stories and impressions!

2 thoughts on “If I Could Play: Ryuutama”