A few weeks back – or a month, or multiple months, or something, I don’t actually remember – I posted an article about what kind of character I would play or what kind of game I would run if I ever finally got the opportunity to play Apocalypse World. And WAY back in the day, I shared an article about five tabletop RPGs I looked forward to playing. With that article almost two years in the past, I’ve been thinking about doing an updated version with five new games. However, there’s a couple things that have caused me to rethink that. For one, Apocalypse World would definitely make that list and I just did an article on that game. For two, one of the five games on the list would be a repeat; while my tastes have changed and I have also discovered newer RPGs that I would rather play first, Numenera has been on my mind since the beginning and I still want to get my mitts on it at some point. So instead of redoing the article about five different games, I thought it might be more fun to go more in-depth and do a miniseries similar to the Apocalypse World article.

The short version of that really long story is that today, I want to talk about Numenera, a game I have wanted to play for nearly two years now. Why is it awesome? What kind of character would I want to create? What kind of game would I want to run for a group of players? All those questions will be answered today as we explore the world of Numenera!

The above quote is one of two driving forces behind Numenera. The other is an image seen by the creator in a dream, two cloaked figures fighting the cold air as they walk across the gears of a massive machine. They are unaware of the purpose of the machine, or even the concept of a machine, but it’s been a part of their lives since the beginning and they are as familiar with this unknown device as we are with the grass we walk on. These concepts work together to create a world that is simultaneously sci-fi and fantasy. Technology is part of daily life but is thought of as magic because no one can understand where it came from or how it is capable of what it accomplishes. This unique concept for a fantasy world is the setting for this game known as Numenera.

Numenera takes place in the Ninth World, our very own planet Earth but a billion years in the future. If you are sciency enough to say “hey wait a minute, shouldn’t the Earth have died by then?” then you’re totally right (I guess – I’m more fascinated by pseudoscience than astronomy). But eight great civilizations have risen and fallen before the ninth world, and they commanded the technology to reshape the planet, travel the universe, and lengthen the life of the sun itself. Chances are that some of these civilizations weren’t even human, and the devices that they created were not designed to be compatible with humans at all.

Playing this game is all about the interplay between these genres. Humanity has access to technology but they do not understand it. That technology can be horrifying and maddening in a very Lovecraftian sense, or it could also be the hope to unlocking a better future in the fashion of post-apocalypse. This world is fantasy and sci-fi, horror and hope, and you can focus on these themes individually or all together in one fantastic universe.

When it comes to gameplay, the Numenera system is all about resource management. Not in the sense that a survival game would be, but rather than all of your stats are a sort of “currency” you can spend on actions. As you put effort into things, you tire yourself out and become more vulnerable. As you take damage, your wounds prevent you from being able to take as many actions. Pain and effort all tax the same currency and work together to tire you out for the end of your day.

Each character has three main stat pools: Might, Speed, and Intellect. Whenever you take an action that requires a roll, you test one of those three stats against a Difficulty Rating from 1-10. To pass the test, you have to roll three times the difficulty rating on a d20. This means that you’ve got less than a fifty percent change of success on any task of 4 or more, and by the time it gets to 7 you need some kind of outside help to succeed. This is where you stat pools come in – you can spend points from the appropriate pool to lower the difficulty rating of a task. This makes it easier to succeed, but spending points over and over again during the course of the session tires you out. And since damage taxes the same resource, you’re eventually going to run out of juice and need to rest. This balance is the resource management I was referring to above.

The most important thing about Numenera is probably the cipher system. Ciphers are one-use numenera (pieces of leftover technology) that your characters can find during an adventure. They give useful and potentially amazing effects exactly once, and you can only carry so many at a time before their natural frequencies and interference start to cause you serious problems. You are encouraged to use ciphers pretty regularly, and you are always collecting more. This means that your “abilities” are constantly changing, keeping the game fresh and making each scenario feel unique because you always have different tools for the job.

Of course, you do have a regular set of abilities that your character can rely on as well. Character creation in Numenera is cool because you can describe your character with one sentence: I’m the adjective noun that verbs. The noun in this case is one of three character classes. You can choose from the glaive (a warrior type), the nano (a wizard type), or the jack (who falls in-between). The character type you choose decides your starting stat pool and a good portion of the moves you can develop when leveling up.

The adjective in your character description is your descriptor, a word that establishes something about your character’s personality. There are many descriptors ranging from things like Charming to Tough to Clever to Stealthy. The descriptor you choose affects your stats and skills but might also give you a weakness to deal with as well. For example, a Mystical character has a higher intellect pool, can sense the location of numenera, and commands a low-level esotery (read: magic spell) for free. However, these characters also give off a weird vibe that’s really off-putting to other people.

The verb in the description is your character’s focus, and just like descriptors you have a lot of options here. Your focus gives you new abilities that can line up with your character type or supplement it with new things that you otherwise might not be able to do. Example foci are things like Wields Two Weapons, Rides the Lightning, and Lives in the Wilderness. Your focus gives you really unique abilities, and often these abilities cannot be accomplished by another focus or character type. 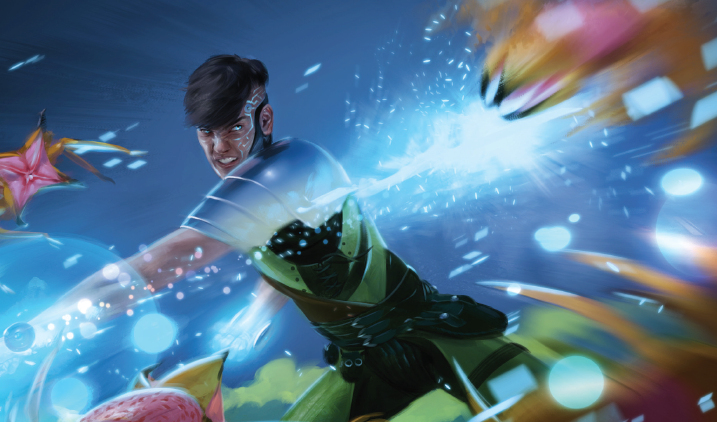 So how would I describe my character? Well if given the chance to play Numenera, I’d want to play as a Learned Glaive who Explores Dark Places. I like the idea of being a powerful warrior character but I don’t want to be a dumb one – I envision an explorer who is fascinated with the numenera and has read many books to learn history and the secrets of magic. In search of ancient tomes and powerful numenera he explores the deepest places he can find, his keen mind and mighty sword arm guiding him through safely.

If I were to run a game in the world of Numenera, I’d want to handle it in one of two ways. I love the idea of using this setting for Lovecraftian horror, the idea that you should be most afraid of the things you cannot possibly understand. Complex machines long corrupted and without purpose visiting unspeakable horrors, twisted creatures from other dimensions picking a person to pieces out of curiosity and study, overreaching Aeon Priests discovering secrets that drive them mad and lead them to commit atrocities – that sort of story is right up my alley as a GM.

I also see potential for a fun, episodic fantasy story in the vein of the Dragon Quest video game series. There’s this area in Ninth World called the Beyond, which is a wasteland spotted with the occasional village that depends heavily on numenera to survive. A party of adventurers could move from place to place, solving problems that prevent these protective numenera from working – or the ones the ancient machines are causing. Each town could take two or three sessions of play and then the characters move on to the next one, meeting a new cast and having a totally new set of problems to face.

Now I turn the conversation to you, adventurers. Would you be interested in playing this tabletop game? What kind of character would you want to create? What kind of adventures would you wish to have? If you’ve played Numenera before, what’s one of your favorite experiences with the game? Let me know in the comments and thanks for taking the time to join us here for Tabletop Tuesday!

5 thoughts on “If I Could Play: Numenera”