Greetings, adventurers young and old! Are you a blogger? Do you have what it takes to prove that your passion is the best? Do you love writing and the spirit of competition so much that you would turn down compensation even if it were offered to you? Then do I have some news for you!

Recently I have been teasing a new community event here on the blog, something I planned to roll out in August. A few of you have been awaiting the details and expressing an interest in participating, and the time has now come for me to discuss my plans and to gather up a group of interested bloggers in order to participate. So without further overdramatic exposition, let’s jump right in to the nature of this new event: the Blogger Blitz! 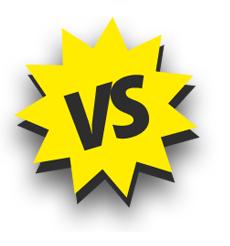 Our last community event here on Adventure Rules, the Charming and Open event, was all about asking friendly questions. This time, I wanted to host something a little more competitive; in true video game/anime tradition, this event will be a tournament! Eight bloggers will compete in 1-on-1 matches in a single-elimination battle to be the best. Best what, you may ask? Here are the basics.

Each blogger who enters the competition will submit a video game character. I personally recommend that you simply choose your favorite, because this contest isn’t about which character is the strongest, fastest, or smartest! It’s all about which blogger can craft the most impressive argument proving that their character can accomplish some kind of ridiculous challenge – and that the competition can’t touch them. Sure, Cloud Strife can kick some serious tail, but could he be the best babysitter? What about designing an informational poster on aqueduct construction? It’s up to you to prove why he would be totally awesome at those things!

As I stated, the plan is to have eight competitors facing off in 1-vs-1 matches. The winner will be chosen not by an audience of followers but by three or five fellow bloggers who join the event as impartial judges. The goal of that is to prevent the competition from becoming a contest to see who has the most followers – with a small panel of judges the focus is all on who crafts the best defense for their favorite video game hero (or villain). Win a match and you progress to the next round – lose, and you’re in the audience for the rest of the tournament. Whoever wins the final round will be crowned champion of the Blogger Blitz and receive the best reward ever: personal satisfaction and bragging rights!

WHAT ARE THE RULES, AND HOW MUCH OF A COMMITMENT IS THIS?
The rules of the competition will be pretty straightforward. Each person who signs up will choose their favorite video game character – if two people choose the same one, I’ll talk to them about a fair way to resolve the tie (right now I am leaning towards both folks defaulting to their second-favorite). I will take responsibility for randomly assigning matches and also the nature of the competition – no two “bouts” will feature the same contest and no contest will be as straightforward as “beat the other person up,” so characters from all genres at any power level will be able to participate. Bloggers will be given a word limit to craft their argument in favor of their character and to demonstrate how the other character’s weaknesses and flaws will lose them the competition.

Both posts in a particular match will go up at the same time on the respective blogs of the competitors. Based on the quality of the arguments, the judges will determine which character would win and cast their votes. The winner chosen by the judges will go on to the next round!

In a classic eight person single elimination tournament, you end up with a total of seven bouts. Round One will see four one-on-one matches; the Semifinals will feature two matches from the winners of Round One; and the Championship Match will pit the semifinalists against one another. There will be one match a week for a period of seven weeks, so if the tournament begins in August as planned everything will wrap up in mid-September. Of course, no one is expected to write posts during the entire thing. At most, you’ll end up writing three posts, one for each round of the competition. If you win the semifinals and go to the championship, you might end up having two posts due on back-to-back weeks. But as far as writing time you are committing to this event, it’s not a huge amount. The tentative word count I have in mind for the posts is 500, so at the very most you’re writing 1500 words in seven weeks – a pretty manageable amount, I think!

Of course, things work a little differently if you volunteer to be a judge. This is definitely the greater commitment, although it’s a different type of commitment in that you are agreeing to read, not write. The judges for the competition will have to read every post – two posts a week for seven weeks for a total of fourteen posts. You’ll then be responsible for letting me know which post you felt offered the best argument. There’ll always be an odd number of judges so we’ll never be looking at a tie. Whichever competitor has more judge votes will win the match!

SO WHO SHOULD PARTICIPATE IN THIS EVENT?
Great question, adventurers! I want to emphasize that any blogger is welcome to compete. However, Adventure Rules is a gaming blog and so the character you submit to the competition MUST be a character from a video game. Gotta stay on topic, right?

To be a COMPETITOR, you have to be willing to commit to writing posts. These posts will likely be 500 words in length, and at most you are writing three. Because of the random nature of the matchups, everyone’s schedule will look a little different. Some folks may have a long break between posts, or write nothing at the beginning but then have multiple back-to-back weeks if they win. So flexibility is a plus! Competitors are going to be crafting arguments for why their favorite character is capable of participating in totally crazy events, so creativity and a strong understanding of the abilities of the character you choose will be pretty valuable. I’m going to be looking for eight bloggers to be competitors.

To be a JUDGE, you have to be willing to commit to reading posts. Judges will have something to do each week, but won’t have to do any writing, so it’s a different type of time commitment than a competitor. Judges should be impartial not just in the sense that they don’t simply vote for their favorite blogger, but also in the sense that they don’t just vote for their favorite character. A critical eye and analytic mind are great tools for a judge to have. I’m going to be looking for three or five bloggers to be judges.

Roles will be given on a first-come, first-serve basis, so if you’re at all interested you’ll want to let me know quickly! If you want a role, please leave a comment on this post informing me of which role you want in the event: competitor or judge. Additionally, if you want to be a competitor, go ahead and include your favorite character and an alternate so I can get an idea of what characters will be competing in the tournament.

WHAT IF I WANT A ROLE BUT MISSED OUT?

Fear not, adventurers! As long as this event goes smoothly I have every intention of holding another one. In fact, I already have ideas for what I affectionately refer to in my brain as seasons two and three. So if you are hearing about this late or just barely missed out on getting a role, you can always participate in the next competition. There’s also going to be another Charming and Open coming before the end of 2017, so that will be another opportunity to participate in a community event here on Adventure Rules!

THAT’S EVERYTHING!
My hope is that this will be a fun and friendly competition full of narrow victories and wacky scenarios. If you’re excited about this event and want to participate, please remember to leave a comment with the role you wish to play! If you don’t want to participate in the event but are still excited, feel free to share this with friends and encourage your favorite bloggers to get involved. After all, I need at least 11 people to get this event running, so the more folks who see this the more likely it will be that the event can be held. Thank you all for reading and I hope that you are excited to participate in the Blogger Blitz!

40 thoughts on “Calling All Bloggers: Seeking Volunteers for the Next Community Event!”