The first time I saw Nintendo’s upcoming game ARMS, my skepticism knew no bounds. They described the game as a strategic, complex game that took lots of skill and technical thinking. This description came after 1-2-Switch was shown off, suggesting that the game to follow was for more serious players than the minigame compilation. So when those springy arms stretched across the screen and they showed off this game for the first time, I was flabbergasted. THIS is the “technical, strategic, complex” game they wanted to show off? No way.

Despite my poor first impression, I continued to follow coverage of ARMS. I watched the Treehouse team show off the game during the Switch live stream presentation. Anytime a new trailer was shown or a new character confirmed, I paid attention. And as I got to know ARMS better and saw more of what the game had to offer, something strange happened. My negative first impression of the game began to change. I went from “no thanks” to “that seems okay” to “hey this looks pretty good,” and now I have landed firmly in the camp of “I WANT THIS GAME.”

The ARMS Direct shown off on Wednesday has fully sold me on this title. So today, I thought it would be fun to go into the details discussed during the direct and to share my specific thoughts on different aspects of the game. If you didn’t watch the Direct but want to, you can check it out on Nintendo’s YouTube channel. Since I’m directly reacting to the information presented there, it may not be a bad idea to watch that first.

THE RULES OF COMBAT
ARMS is a game all about punching stuff, but it’s not as simple as flailing around with a Joy Con in your hand. The angle of your punches is paramount in the game’s basic strategy, allowing you to pull off combos and catch opponents off-guard by striking at weird angles. Another big part of the strategy is in the different weapons you equip. Besides their attack power and the angle at which they strike, weapons have two other important stats that are discussed in detail in this Direct: weight and attribute. 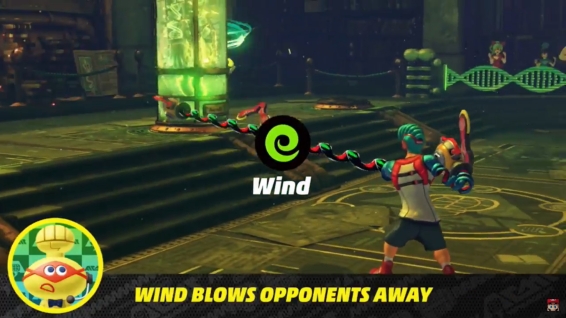 Attributes on your arms change their effect whenever you unleash a charge attack. Each of the seven attributes has a unique effect and allows for a different strategy. The attributes are Fire, Ice, Electric, Wind, Stun, Explosion, and Blind. Fire attacks knock the opponent down, Ice attacks freeze them to make them slower for a few moments, electric attacks shock the opponent and give you an opening, wind attacks send them whirling away, stun attacks prevent them from moving, explosions throw them backward, and blind attacks block their vision.

So far it seems like Fire, Wind, and Explosion kind of amount to the same thing, and that Electric and Stun are probably very similar as well. The former are likely useful for throwing opponents into stage hazards, while the latter create an opening for you to land a much bigger attack. Of course, it may prove that these similar-seeming effects will actually play out quite differently in combat, so I look forward to getting to experience the differences for myself.

THE FIGHTERS
This aspect of the Direct was the one I anticipated the most. The unique fighting style of the different playable characters is the meat and potatoes of this sort of game, so I was definitely excited to see what ARMS would deliver. Ten fighters were ultimately shown, many of whom had been revealed before; characters like Spring Man, Min Min, and Mechanica had been shown off before. However, even characters that were already revealed were discussed in more detail, so let’s go through the roster and see what there is to see! 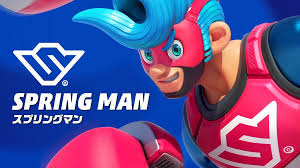 Spring Man seems like the classic balanced character of the game. His signature ARMS are pretty balanced in weight class and they strike in different patterns, making him a pretty versatile fighter. His signature ability is gaining power as he takes damage – Biff the commentator points out that this makes him pretty popular with younger players, which makes a lot of sense. He seems like a solid entry-level character, probably easy to play but maybe not the best character in the game once you have some experience under your belt. 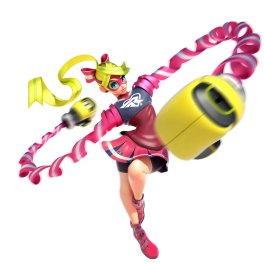 Ribbon Girl is a professional singer and she competes in the tournament using her acrobatic abilities. She is able to jump in midair, allowing her to stay airborne when dealing with foes and dodge punches at unusual angles. She can also drop from the air very suddenly, allowing her to throw them off and create a new opening. Her attacks seem to be focused more on speed than power, so players who prefer a quick, acrobatic style will likely prefer her. 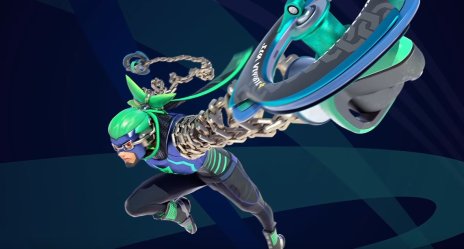 Ninjara is one of the younger competitors in the ARMS Grand Prix, being only a college student. He’s studying at Ninja College and is competing as his senior project. Ninjara is all about working odd angles with his attacks, his signature chakram curving to strike from the side when he punches. He has the power to disappear in a puff of smoke, making it difficult for opponents to track his movements across the battlefield.

Mechanica is unique in that she does not actually have the special ARMS that other characters possess. Instead, she had developed a robot fighting machine capable of wielding them. Mechanica is a heavier character who can tank certain hits and is able to hover using the technology in her suit. Her heavy suit comes armed with heavy weapons, and she can hammer foes into submission with her attacks, 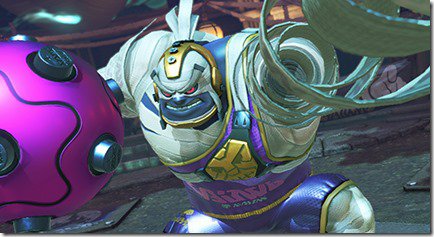 Master Mummy is a musclebound tank of a man, specializing in heavy weapons. His massive body allows him to endure enemy blows, and regular attacks won’t cause him to flinch as a result. When he uses his guard, his HP begins to restore, so keeping offensive pressure on him and finding ways to avoid his guard will be a key strategy in dealing with him. 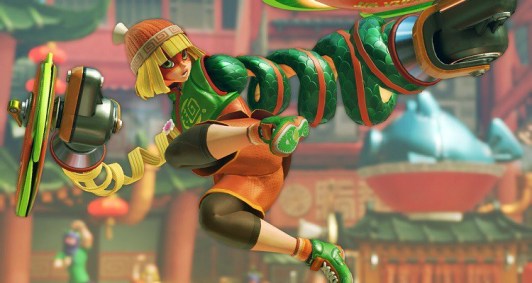 Min Min is the mascot for ramen noodles in the ARMS world, which makes sense given her arms. Of course, the left one has a bit of a surprise – she can turn it into a dragon with a charged attack! Min Min also specializes in martial arts, and she can use her feet to kick punches away from herself. Her signature ARMS focus on dragon attacks, which have a bit of a delay, and striking at odd angles. She seems like she’ll be tough to master, but she could be worth it. 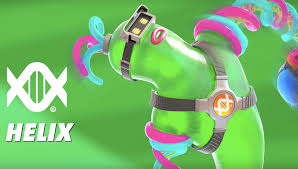 This combination of name and design is pretty fantastic. Helix was engineered in a laboratory where research is conducted on ARMS. His whole body has a squishy texture that can bend and squish around the battlefield in all sorts of interesting ways. Right now, Helix seems to be the only character that actually specializes in a blindness attack, so I am really interested to see if that strategy stays unique to this character. 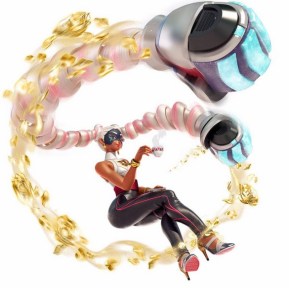 Twintelle is a movie star who somehow ended up with hair for ARMS instead of arms. Which I think is a pretty nice change of pace, myself. Twintelle is really popular ever since her reveal because she has such a nice-
“Don’t even say it!”
-ability, which is the power to slow down time when she’s charging. Her signature ARMS lean much more towards the light-and-fast side. 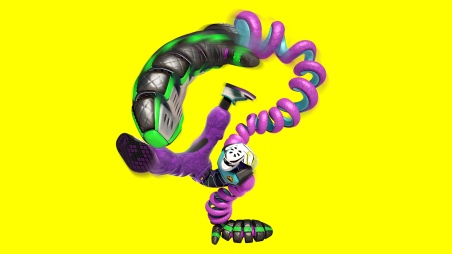 This multitalented little fella Kid Cobra has lots of skills – extreme sports, streaming, and competing in the tournament! He’s all about speed with his snakelike movements and whiplike ARMS. Dashing is his specialty, his dashes giving him added defensive options and helping him to put on offensive pressure during battle. His arena is a skating rink where all the fighters compete on special boards that I think are called coma boards. 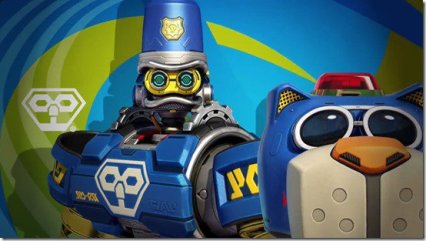 Robot cop and robot dog team up! Byte and Barq fight together in the Grand Prix, Barq providing support by absorbing attacks and throwing a few punches of his own while Byte can use him as a springboard to get some extra air. They can even combine for a more powerful attack, and while Biff the commentator may question the legality, no one questions the effectiveness.

MOVING FORWARD
So what’s next with ARMS? Well, before the game releases, a demo of the game is going to be available to the general public in an event called the Global Testpunch. The weekend of 05/26-05/28 and the weekend of 06/02-06/04, players with the demo will be able to log on and compete against each other, trying out the different characters and ARMS available in the game. I personally am really excited for this and can’t wait to get my hands on the demo!

There are other things planned as well. At E3, an ARMS open invitational will be held where folks can compete for the title of first ever ARMS champion. Since that event happens directly before the game hits shelves, I anticipate it to be a pretty healthy marketing strategy. Speaking of great strategies, ARMS is planned to be updated with new fighters, new stages, and new ARMS to fight with – all for free! That’s right, no worries about having to pay for DLC with this title. Players can enjoy new content for this game just for the price of the base game (at least for the time being).

Well, adventurers, that’s gonna be it for me. Did you watch the ARMS Direct? Are you at all excited for this game? Let me know in the comments, and I hope to see you at the Global Testpunch the next couple of weekends. I’ll be happy to sock you right in the jaw!