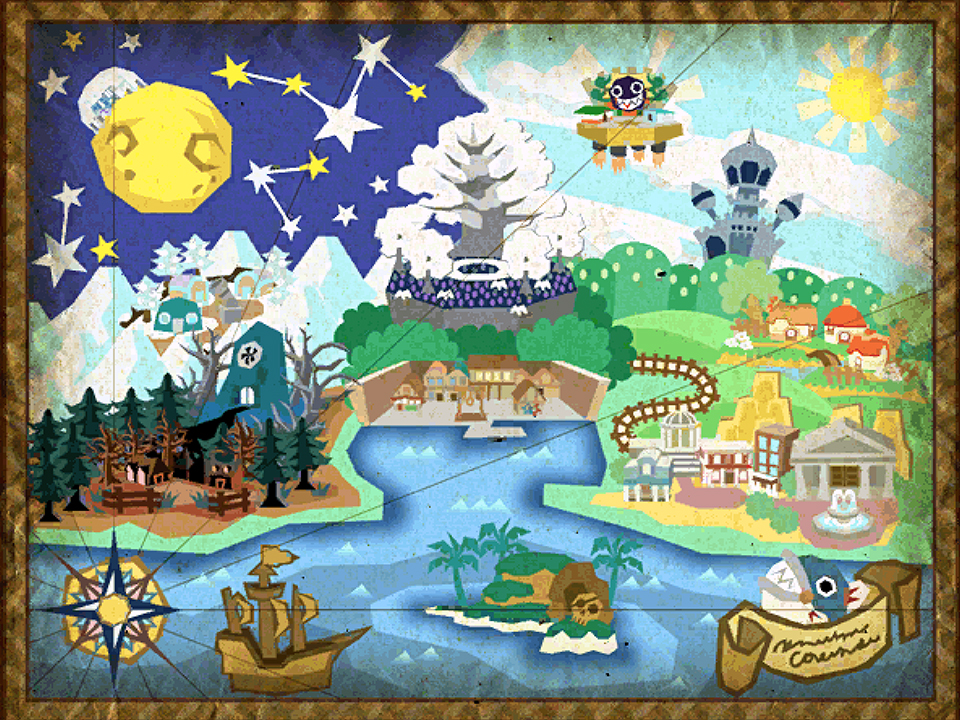 For many players, diving into the world of video games is a pleasant escape from real life. I know after a long, stressful day at work, I love to kick back and enjoy a fun game. Defeating bad guys, solving puzzles, and exploring strange locales is a great way to unwind. With specific goals to work towards and in some cases lots of social interaction, it’s easy to see why games are appealing to those burnt out on the daily grind. But while with some games we are content to experience the world across a screen, there are some worlds we wish we could dive into directly.

This week I’ve been answering questions from adventurers as part of the Charming and Open event. If you’ve missed my answers to other questions, you can check them all out right here! Today’s question came from Kim over at Later Levels. You should definitely check out her blog, and while you wait on her response to my question, consider reading her article about how a press pass isn’t a necessity at a convention.

The question that Kim posed to me was this: “if you could visit any world within a video game, where would you go and why?” She also added “how would you spend your time there?” So today we’re going to talk about the game world I’ve love to go to as a vacation of sorts: the city of Rogueport and the surrounding areas from Paper Mario: The Thousand-Year Door!

Paper Mario didn’t originally come to my mind when I was thinking of the answer to this question. But at first, I was thinking of it differently: what game world would I want to live in? That’s a different question, though, and once I started thinking of this less like a relocation and more like a vacation, I got pretty excited about heading to Rogueport. Why would I go to a place with a clearly-displayed gallows in the main plaza?

I’m making a key assumption here: I recognize I am in a game world. I’m not visiting this place with zero knowledge of what it is – I am totally aware the whole time that this is one of my favorite video games. That makes it all the more appealing because I know the lore of the place and know all the good spots I want to visit, and people I want to meet. Plus, there’s actually a lot of stuff about the setting of The Thousand-Year Door that lends it to tourism, and I’ll be providing you with my plan of how my family and I would spend our vacation there!

FIRST STOP: ROGUEPORT PROPER
The city itself has some pretty interesting places to visit. On the east side of town is the Trouble Center, a place where people who need help post their troubles on a board that anyone can visit. Good Samaritans come here to find something to do, and I think it’d be really cool to hit up the Trouble Center and perform some random acts of kindness for folks throughout the city. After spending some time doing that, I’d want to head over to the west side for some gaming at Don Pianta’s Pianta Parlor. There’s lots of cool mini-games there where you can win prizes, and I imagine my son would have fun playing around in the little arcade.

For lunch we’d stop off in central Rogueport at Podley’s Juice Bar. Podley is the kind of guy who tells a lot of stories, and just listening to him talk over a simple lunch would be delightful. We could also meet Admiral Bobbery there and hear him spin yarns of his love of the sea and his greater love of his late wife, Scarlet. Once that’s done, it’s down into the Rogueport Sewers to explore the old city below. You see, the current town of Rogueport is actually built upon the ruins of the original city, and many of those ruins are still well-preserved beneath. The architecture of Old Rogueport is beautiful, and there’s even a quirky little community down in the sewers where we could get our fortunes told by the talented and beautiful Merluvlee.

We’d be missing out on part of the Rogueport experience if we didn’t stop at Zess T’s house for dinner. She’s the best chef in the city, and even though she’s very grumpy, she has a good heart. My wife loves mushrooms so she should feel right at home chomping down on some Shroom Fry – as for me, I think I want to see if I can handle a bowl of Zess T’s spiciest Spicy Soup! After dinner, we can wind down on the east side by visiting Grifty the bard and listening to him weave stories of Rogueport’s history long into the night.

SECOND STOP: GLITZVILLE
Glitzville is a city in the sky and definitely the most touristy place near Rogueport. This floating marvel is home to the Glitz Pit, an arena where warriors duke it out for glory and coins. To get there, you fly in a Cheep-Cheep blimp up to the floating city. There are plenty of fighters I’d love to see in a match here. Although he isn’t highly ranked, the valiant King K was a good friend to Mario and should be fun to watch in battle. Skilled teams like Hamma, Bamma, and Flare would be really cool to watch against a powerful solo act like The Koopinator. And of course it’d be awesome to see the solo debut of Mario’s Yoshi companion, who at the end of the game heads to the Glitz Pit to compete. Seeing him face off against the champion Rawk Hawk would truly be a battle to see! 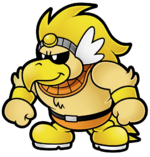 Of course, there’s more to Glitzville than fights. A nice juice bar is located here as well, and that bar is where my family and I could meet the current fight promoter of the Glitz Pit, Jolene. She often drinks there in disguise, and while no one in-game knows her secret, I’d know exactly who I was talking to and could sneakily get an interview. Plus, that juice bar is where Mario got his Hammawhack 5000, the best hammer on the market. So it’d be one more landmark to mark off my list!

THIRD STOP: KEELHAUL KEY
Adding to my list of places that don’t actually sound pleasant, Keelhaul Key would be an awesome destination simply for the novelty of it. Every vacation needs a beach day, and the beach on Keelhaul Key would definitely not be covered with other tourists. Plus no boats crowding the ocean! We could look out and see as far as our eyes could manage, just rolling waves, graceful birds, and maybe the occasional malevolent spirit.

Of course, the best part of visiting Keelhaul Key would actually be getting there. How does one get to Keelhaul Key safely, you might ask? Naturally, you just ride on the ghost ship of the undead pirate king Cortez! Cortez may sound like an intimidating fellow – and he is – but he’s got a soft heart and I bet he could tell some awesome stories. Plus, on his ship you don’t have a bunch of unpleasant, sweaty crewmen to deal with. The ship is propelled by magic and as a result, the trip would just be my family and the deadliest pirate to ever sail the ocean. Awesome!

FINAL STOP: EXCESS EXPRESS AND POSHLEY HEIGHTS
Finally, no tour of the Rogueport area would be complete without taking the three-day train ride to Poshley Heights upon the Excess Express. The Express is a magnificent and lovely train that pulls out all the stops for its riders. It has its own souvenir shop, a professional chef named Shimi who butchers the English language but makes excellent food, and even a haunted room! The Toad ghost that lives on the Excess Express is a pretty cool guy as long as you don’t read his diary – he will literally kill you for that. Not worth it unless you hit a save block just before. I imagine my son would have a really good time just running around the train, checking out all the different cars and neat rooms.

Poshley Heights is a lush and elegant community reachable only by the Excess Express. As the name implies, the folks who live here are all wealthy and the town is totally extravagant. My wife loves big houses with cool architecture and seeing all the mansions would be super fun for her. I’d be most excited about visiting Poshley Sanctum, which is managed by Pennington, an amateur detective. Pennington is rather scatterbrained and actually a pretty lousy detective, but he thinks he’s awesome and listening to his stories would be an absolute blast. I could even tell him I’m from another world and get a kick out of his crazy theories about how I got there.

For our evening accommodations, Poshley Heights has a massive and fancy hotel that we could stay in. My wife and I have only ever stayed in a nice hotel together and had a legit vacation one time – and since I was actually there for work, it wasn’t exactly a vacation. Having the opportunity to lounge in luxury, wake up to a delicious breakfast that we didn’t have to cook, and then spend the day sightseeing would be relaxing and basically a new experience for us!

So there you have it, my ideal game world to visit and what I would do there! Now I turn the conversation to you, adventurers. What game world would you want to take a vacation to? Any specific things you want to do while you’re there? Be sure to let me know in the comments!

Finally, looking for something to do this weekend? You ought to consider checking out the 72 hour stream being hosted by Gamely Giving! This is a charity stream and all proceeds go directly to the UK charity Special Effect, which helps folks unable to play games in the traditional format to get equipped with cool gear that allows them to experience video games in a way that works for them. This is an awesome charity and Kim, the blogger who posed today’s question, is going to be one of the streamers involved! I highly encourage you to check out the stream – I plan to be there myself as much as I am able. You can find Gamely Giving’s Twitch by clicking this link. The stream starts at 11 AM EST today, so depending on when you’re reading this it may already be going. So go check it out!

3 thoughts on ““If You Could Visit Any World Within a Video Game, Where Would You Go?””