Adventurers, a challenge has been issued. As a gamer, I can never say no to a challenge. No difficulty setting is too high, no challenge run too extreme, no secret boss too mighty. But this challenge, oh…this challenge is gonna be something.

First of all, credit where it’s due. This challenge was issued to me by my friend Charlotte over at Mosaicca, a lovely lifestyle blog that also dabbles pretty frequently in the sort of geekery my followers generally appreciate. So definitely go check out her work, as it’s quite good!

I have the power to nominate others, if I so choose…I know that the excellent Well-Red Mage recently celebrated a first bloggiversary about a month ago, so seeing the first post could be quite interesting. I’ll also nominate a new blogging pal of mine, Geddy, who has been around just a smidge longer than I have and whose first post could trigger some nostalgia. Naturally, participation is voluntary, but if you like the idea then feel free to join in.

The rules, as I understand them, are as follows: I have to post my actual first post, not my first GOOD post or the first one that got likes or whatever. Including the hashtag in the post title is also apparently a thing, so we’ll run with it. So without further ado, here it is – wait, wait, okay, there actually needs to be an introduction here first.

THE HISTORY OF MY BLOG

Long ago (okay, not actually that long), I was a senior in college. Those were good times – I was happily engaged to the woman who is now my wife, my best friends all lived within a mile of me, and I had no adult responsibilities other than making sure I passed my classes. I miss those days, or rather, the simplicity of them. And having access to a reliable tabletop group, but that’s a whole ‘nother post. Anyway, at the time I was taking a class called “Senior Seminar” for my theater degree, and one of my assignments for that class was to start a blog.

Why did I have to start a blog for a theater course? Beats me. I’m sure at the time I knew the answer to that question and the answer made sense to me, but I’ve slept since then and I honestly have no idea what that was all about. Anyway, as starting a blog was an assignment, I went online, found WordPress, created a login, and posted my first ever post on my brand new blog: The Opposite of People.

Fast forward to August 2015. I’ve been graduated for a year, my wonderful son is only a couple of months old, and I’m currently between jobs. Bored and wanting to start a hobby that’s a bit more productive than playing video games all day, I decide to start a blog. And write about the video games I play all day. Hey, it’s a start, okay? So I go online, find WordPress, create a login – oh wait. This says I already have a WordPress. What?

Oh. That’s right. The Opposite of People.

Rather than create a whole new blog and leave the old one alive, I decided at that moment to simply rebrand. I deleted the one post, changed all the graphics and the setup and the blog’s name, and Adventure Rules was born.

Unfortunately, I don’t have that one post from The Opposite of People. Man, do I wish I did. Reposting that would be absolutely amazing, I think. Alas, it is gone, and so instead we’ll have to settle for my first post on Adventure Rules. So now, without further ado – for real this time – my first ever blog post (sorta).

SUPER MARIO AND THE SOLUTION TO PARTISAN POLITICS 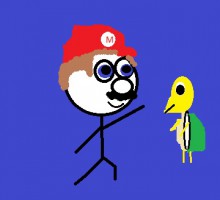 7 thoughts on “The Beginning of the Beginning; or, #MyFirstPostRevisited”