There’s a game going around Facebook right now that has to do with Pokemon gyms. You comment on someone’s post and they give you a type. You build a gym around that type. Then, you post your gym on your own page and give types to people who comment on it. It’s a fun little way to pass some time and to share in your Pokemon love with friends. I decided to jump in and the type that was given to me by an adventurer was Bug type. He MIGHT have known that Bug is my favorite. 🙂 At any rate, I thought it would be fun to share my gym here on the blog and to perhaps expand the game beyond the realm of Facebook posts. 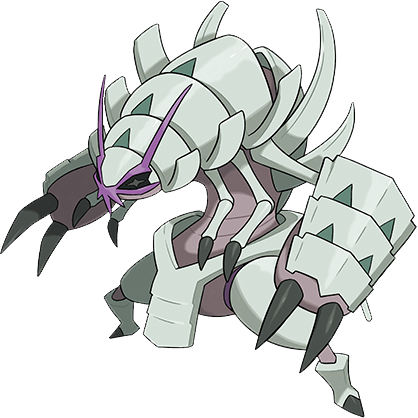 If you were around back when I was covering all the Pokemon Sun and Moon trailers, as soon as I set eyes on the adorable Wimpod I predicted that it was going to evolve into something massive and powerful. And here it is, Golisopod, the Gyarados of the new generation. This guy plays the part of a lead Pokemon very well, and here are some reasons why.
First off, your lead Pokemon sets the stage for what your opponent should expect from the rest of your party. If I led off with Caterpie, that would tell my opponent something like “this guy is a pushover.” Leading off with ole Slim here – well, that says “blast, I’m in for a world of hurt.” It’s all about first impressions in the gym leader game, and this guy makes a seriously good one.
There are other reasons to lead off with Slim besides the fear factor. Golisopod has a unique move called First Impression that is effectively Fake Out on steroids. It doesn’t flinch, but it has high priority and a whopping 90 power, which means that not only does this first-strike move have more hitting power than even Extremespeed, but it has more power than the common physical bug move X-Scissor. Slim comes in strong and starts off with a devastating hit, immediately putting the opponent on the defensive.
Finally, there’s Golisopod’s ability, Emergency Exit. When an attack puts this Pokemon’s HP beneath 50%, he retreats from battle and brings another Pokemon in instead. This means that if the the opponent hits Slim with an attack that isn’t enough to do the job, he’ll duck out automatically so he can come back and fight another day. When he comes back in, that’s another opportunity to use the powerful First Impression move and deal some serious damage.
Slim’s great for leading the team into glorious battle, but what other Pokemon could I have on this team? Slim is weak to Rock and Flying, so I need someone who covers both of those weaknesses, not to mention has the ability to stop the most devastating weapon against a Bug-type team, Stealth Rocks. Luckily, I have the perfect fellow in mind. 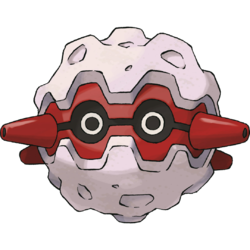 Good ole Gyro is a great physical wall that has lots of utility going for it. It’s basically an essential Pokemon for an all-Bug team because it covers the type’s biggest weakness: the move Stealth Rock. Gyro gets access to the move Rapid Spin to send those pesky rocks away, but that’s not all: Gyro gets access to almost all other forms of entry hazard – spikes, toxic spikes, and its own stealth rocks. This means it can stop the biggest weakness of its teammates while also doling out its own hazards that the enemy will have to deal with.
Gyro also gives me options. If I want to, I can be cheeky and run Explosion to deal some crippling damage to my opponent. I could use Volt Switch to pivot out of battle and bring in someone with more hitting power. I could run Toxic/Protect to stall and wear down bulky opponents. While Gyro certainly isn’t a “Wall” due to low special defense and a lack of access to recovery moves, it can take a hit if I use it against the right opponents. It certainly will do better than any other members of my team when it comes to taking a hit.
Bug/Steel type Pokemon only have one weakness: Fire. Now granted, Gyro is FOUR TIMES weak to Fire, but Slim only takes neutral damage and if I have Stealth Rocks set up, any fire types that come in to mess with me are going to regret it. But my team right now is pretty slow, and it’s going to be easy for my opponents to outpace me. I need something to help me out when it comes to speed, something like…

Named for the leader of the spiders in Undertale, Muffet is a great Bug Pokemon because its second type – Electric – is a serious threat to enemy Flying types. Galvantula is well-known for setting up the hazard known as Sticky Webs, which lowers the speed of incoming Pokemon by one stage. This will make sure that any Rock or Fire type Pokemon that want to cause me problems will be slowed down when they try to do it. And Flying type will be naturally discouraged by Muffet’s ability to drop down a deadly Thunderbolt.
Muffet is a bit of a one-trick pony, but it plays that trick pretty well. Laying down Sticcky Webs is gonna be Muffet’s main goal, and once she does that she’ll be unleashing a number of deadly attacks on my opponents. I’ve got options, here. Naturally Thunderbolt is a great attack, but Galvantula can actually run the devastating Thunder move thanks to its accuracy boost from its ability, Compound Eyes. So Flying types better watch out! When it comes to Rock types, a good ole Energy Ball attack will likely leave them broken. Plus for same type attack bonus, you can’t grow wrong with Bug Buzz, a move that allows Galvantula to lower the enemy’s special defense and make them more vulnerable. If I want to, I could run Volt Switch to really keep the momentum going on my team, allowing me to quickly switch Muffet out of battle and bring in something more suited to the situation.
Now Gyro and Muffet I keep around for some competitive strategies to utilize on the team. But when it comes to Bug types, I certainly have a favorite, and I could not have a Bug type gym without including this incredible Pokemon on the team.

MY ACE: MUSCLES THE HERACROSS 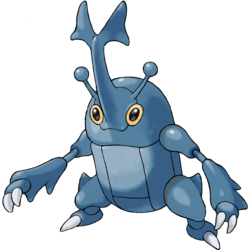 Heracross is an incredible Bug Pokemon and one of my favorites of all time. Bug/Fighting is pretty powerful, although it does boast a crippling weakness to Flying type attacks. But Muscles isn’t thinking about defense. No, Muscles is the man I bring in when I need to do some SERIOUS damage to the opponent.
Muscles and Slim have the same amount of hitting power. The difference between them is their move selection. While Slim’s First Impression is the most he’s going to be bringing to the table in terms of damage, Muscles can pack Megahorn and Close Combat, two incredibly devastating moves with a whopping 120 base power. Heracross also gets access to the moves Earthquake and Stone Edge, two 100-power moves that when run together can hit almost every single Pokemon in the game for neutral damage. Specifically, the EdgeQuake combo seriously messes up the Pokemon that would normally have an advantage against my Bug-type team, making Heracross a key component of my strategy.
Heracross also has some excellent abilities to bring to the table in the form of Guts and Moxie. Guts causes the Pokemon’s attack power to increase by 50% when inflicted with a status problem, and ignores the attack-reducing effect of the Burn condition. This means that if an opponent tries to burn Muscles as a way of crippling him, instead they’ll make him even more devastating in combat. Conversely, if I want to run Moxie instead, Muscles gets a boost in attack power every time he knocks out one of the opponent’s Pokemon.
Now my gym is looking pretty cool, but I still have a bit of a problem: Mega Pokemon. Most challengers are gonna come at me with some pesky Mega that they got from a professor. In order to stay competitive and relevant, I need to have a Mega Pokemon of my own. My choice? 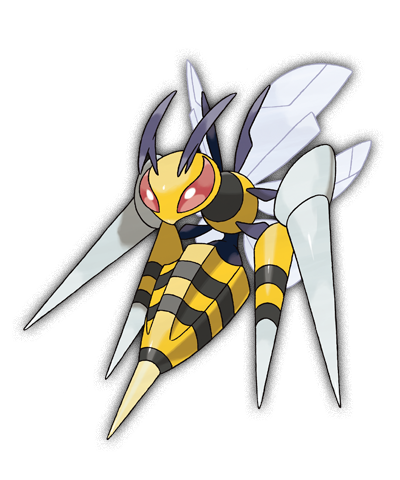 Ugh, this thing gives me the creeps. I hate bees. But hey, he’s on my side, so now he can give my opponents the creeps instead.
Beedrill is a pretty great Mega Pokemon with very high speed and attack power. In addition, it has the ability Adaptability, which increases the damage boost of same type attack bonus (STAB) from 1.5x to 2x. This means that a move with 80 power will actually have a devastating 160 power with STAB, making Beedrill’s Poison Jabs and X-Scissors comparable to a Megahorn attack. Beedrill also has access to U-Turn, a pivoting move that allows it to deal damage before ducking out of battle and bringing in someone else. This means my boy Buzzington can show up, deal a powerful hit, and then immediately disappear so that someone like Gyro can tank the opponent’s retaliation.
I love Buzzington because while Beedrill is typically looked at as a rather weak and useless Pokemon, a Beedrill stayed with me from the very beginning of the first Nuzlocke challenge I ever played, all the way through the Elite Four and even the Pokemon League Champion. This little guy never gave up, and whether or not he has a Mega form he is a permanent member of my Bug-type team. Buzzington may not be my favorite Bug, but he’s definitely my favorite Bug-type Mega.

And there you have it, the five Bug-type Pokemon that I would put on my gym team.

“Uh, Ian, you know you have room for a sixth Pokemon there…”

Yeah, that’s true. And I’ll have a sixth Pokemon, but this one is a little different than the others…

While Heracross may be my favorite Bug from a “using it in combat” perspective, I absolutely love Spinarak. It’s design is just so great! IT HAS A FACE ON ITS BUTT. HOW IS THAT NOT CUTE?
I don’t really remember the Pokemon anime very well and I honestly did not watch it much, but one of the episodes that sticks out in my mind is the one where they go to Catallia City. In this town, Spinarak is the go-to Pokemon for police officers rather than the usual Growlithe. Long ago, a Spinarak foiled the lawless thief known as the Black Arachnid – who apparently used a Meowth, so the name is rather misleading. Anyway, as a kid I thought it was really cool that there was this town where these little guys were the K-9 unit rather than actual canines.
I don’t really have a problem with the design of its evolved form, Ariados, but I love Spinarak so much and Ariados isn’t really competitively viable anyway. So rather than use Ariados as a team member, I’d rather just have Widow on my shoulder during battle, cheering on her teammates and serving as a mascot for my gym. While my other Pokemon spend their time on the battlefield, Widow would hang out with me all day, greeting everyone who comes to the gym.

So there you have it, the team of my very own Bug-type gym. I hope you enjoyed and I thank you for taking the time to read and relax here on Adventure Rules for awhile. In the spirit of the game, if you leave a comment on this post I will comment back to you with a type so that you can form your own Pokemon gym team!