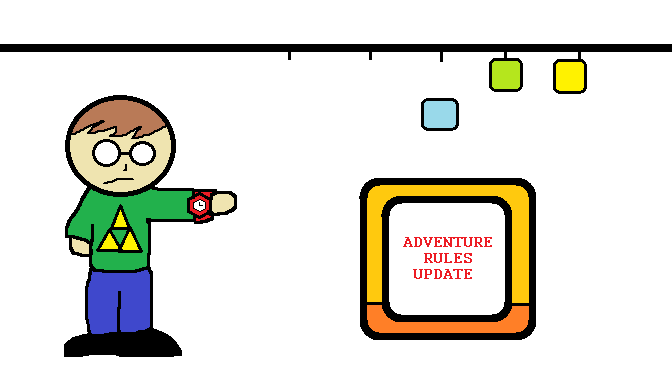 Greetings, adventurers! It’s been a little bit since I have done a coherent, organized update like this, so I figured I would take some time to post and let you know what to expect from the blog for the next few weeks.

First, concerning segments. Awhile back I announced that Fanfic Friday was coming back. Obviously, I lied. Oops. Honestly, I gotta be realistic: this blog excels the most as a blog about video games and tabletops. Fanfic was a way to try and draw in that audience, but I can really do that more effectively by, you know, actually writing good articles about video games. So rather than try to spread myself too thin, I’m gonna zoom in and do what’s most effective at drawing followers and viewers. This philosophy can be extended to pretty much any pre-existing segment here on Adventure Rules – if it isn’t focused on gaming, don’t expect it to come back.

Second, concerning tabletop content. I know that it has slowed down a lot lately, and for some of you that’s a bummer. In particular, I still get folks reading my work on Sixteen: The Myers-Briggs RPG, and have even had a couple of questions wondering where that is at. I apologize for my lack of attention to that project. Unfortunately, I don’t see myself making any progress on it before next year. Between work and the holidays, I only have so much time to dedicate to other things, and I’ve mainly been focusing on playing new games. As a result of that, I doubt tabletop content is really gonna pick up again soon. That doesn’t mean it’s gone, though – as soon as I get the opportunity to play a new tabletop RPG expect lots of posts about that game.

Third, concerning video game content. I just finished playing Zero Time Dilemma and am about halfway (I think?) through Dragon Quest VII. My plan is to be blogging quite a bit of content about those games. Specifically, within the next week to two weeks I plan to review ZTD, post my spoiler-filled gut reaction to the entire story, and do two guides: one focused on solving puzzles and the other focused on unlocking fragments/beating the decision games. In the meantime I’ll still be playing Dragon Quest, which I will review once I finish it. As far as guides for that, I honestly don’t see myself going all-out with that game. The game is something like 80-100 hours long and I wasn’t exactly playing it with the kind of note-taking necessary to provide a full walkthrough. If I do any guides for that game, it may be things like recommended party compositions, or a general job guide showing off the different skills. On top of all that, I intend to do the last remaining Fire Emblem Fates guide (although it might be too little too late for that one) and then standardize all of the Fire Emblem guides so they work well together and all provide the same extensive information.

All that should keep the blog busy for a bit, and while we’re certainly not getting back to daily posts anytime soon, this should fill up this time around the holidays with more content than I provided over the last couple of months.

I do have plans for the new year, though I doubt the change will be quite as dramatic as it was last year. I mainly plan to do some redecorating around the blog, changing the cover photos and updating some sections that I haven’t touched in ages. As far as Blog Goals go, I have a couple in mind, but I intend to change the philosophy behind my blog goals a little bit.

I originally started Adventure Rules as something of a writing exercise, a way to sharpen my writing skills that was fun and that held me accountable. The idea was that starting a blog and having other people around to encourage my writing would motivate me to write more often. It has been a successful exercise – I’ve done more writing (voluntarily, that is) in the last year than I had done since high school. My issue now is not so much volume, but consistency. I haven’t taught myself yet to write even when I have nothing to write about. I haven’t taught myself to really make writing a regular, consistent part of my day-to-day life. So my goals for 2017 will be focused a lot on that.

Blogging for over a year has also taught me that I need to be aware of what a realistic goal should look like. Last year, I set things like follower goals with specific numbers. And that’s fine if you’re the kind of person who does that same thing. But here’s why I think that sort of goal is a bit unreasonable – you don’t have control over whether you accomplish that goal or not. Yeah, you can post your heart out, you can make the best content you’ve ever created, but if people just aren’t reading it then you’re still not gonna get followers. Does that mean you’ve failed? It shouldn’t, because you grew as a writer. Just because people aren’t SEEING that progress doesn’t mean you didn’t make it. You can’t control who clicks on your page or who signs up to follow you. But you can control how often you post and the quality of those posts. If followers come with that, great. If they don’t, also great. There’s more than one way to measure growth.

In any case, that’s kind of what you can expect from me until the first of the year. I hope you’re excited for the upcoming content. I hope too that the reviews and guides that come out help you to make informed decisions about the games that you play and help you to complete them.

If for some reason you decided to click on this update post despite the fact that you’ve never seen my blog before, welcome! The adventurer community is always ready for more folks to join the party. Stick around for a bit, check out some of my other content, and see what you think. If you like what you see, consider following here on WordPress or through one of the social media sites. Adventure Rules has pages on Facebook, Twitter, and Tumblr, so pick whatever site you use the most and go hang out there. Feel free to send me messages or asks or whatever, particularly if you have a specific question/comment about a post that you read. It’d make my day to hear from my readers!

Regardless of whether you’ve been an adventurer for a long time or you just showed up, thanks for taking the time to read. I hope you enjoyed your stop here and look forward to maybe seeing you back next time!