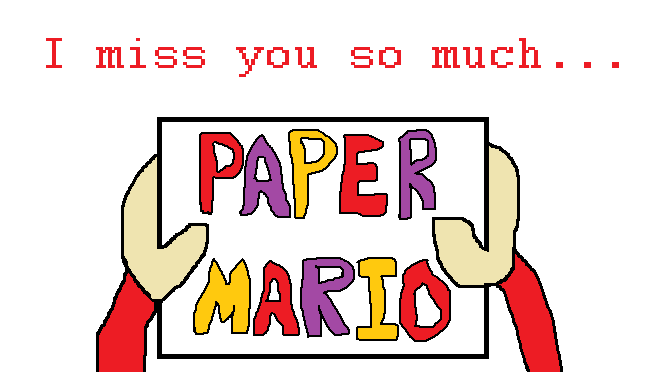 This October I made a sweeping declaration: I would post every day for the whole month. Well due to extenuating circumstances over the weekend, Friday and Saturday were missed. Now, in one Sunday, I must rise up and post for the whole weekend all in one day. This is: THE WEEKEND!

Back when Color Splash was first shown off, I was quick to let everyone know exactly how I felt about it.

* – may not be actual quotes from me

Well now, Color Splash has hit the shelves and lots of people are getting to experience the game and share their reactions. I personally do not own a Wii U, so I can’t speak about the game firsthand. But the overall community impression of the game seems to be pretty consistent, and that impressions is so unexpected that I really wanted to talk about it.

Weird, right? As soon as Intelligent Systems revealed that this game was Sticker Star 2.0, that it was not a return to the RPG formula we so loved in the original Paper Mario and in The Thousand Year Door, a lot of fans were quick to judge Color Splash. Myself included. But here’s the thing: Intelligent Systems seems to have done the unthinkable. When we complained, they listened.

Here are some common complaints about Sticker Star, many of which I myself have touched on before in places like this article about my thoughts on Color Splash.
– Fun, creative characters were replaced with cookie-cutter Toads
– Inventory-based combat system did not function well
– No reason to fight in battles because there was no reward and it wasted resources
– Bosses could only be defeated with certain Things so there was no strategy
– Thing stickers needed for puzzles and bosses were difficult to locate
– The world was lifeless and lacked creativity, making the levels all blend together

Based on the reviews I have seen and read about Color Splash, many of these concerns have been addressed (some more thoroughly than others). In particular, Thing stickers seem to be easier to find and while they are required for bosses, they are required simply to initiate the fight – you still have to utilize strategy to actually win the fight once it starts. Random battles now reward you with points that expand your paint capacity, and although the battle system is still inventory-based that inventory is greatly expanded. In particular, though, what I have seen fans commenting on is the spirit of the game. Yeah, there are still cookie-cutter Toads, but they have quirky dialogue and fun personalities. Villains are the same way, and many fans have commented on how the humor evident in older Paper Mario titles has returned with a bang. The world in this game is alive and full of fun, clever characters to interact with. And if you look back at comments I’ve made about Paper Mario in the past, THAT’s what in my mind really makes a Paper Mario game. Not the RPG gameplay, necessarily, but the spirit of fun and humor that makes the game engaging the whole way through.

I haven’t gotten the opportunity to play the game and see for myself if I agree with the critics and fans who have good things to say about Color Splash. But the overall positive reception of the game has given me hope. I’ve said in the past that the best way to convince a company to make change is to play their game and then express your frustrations about it in an intellectual manner. That seems to be what happened between Sticker Star and Color Splash, and Intelligent Systems has absorbed that criticism and used it to create something better. Is it exactly what we wanted? No. But they seem to have taken a step in the right direction, and a game can still be Paper Mario without being Paper Mario: RPG. The fact that the developers of the game DO hear us and want to incorporate our ideas when deciding how to make a game better gives me hope that from here, the series is going to continue to climb up towards greatness.

Now I hand the discussion to you, adventurers. Have you gotten to play Color Splash firsthand? What have you enjoyed about the game? What still needs work? Let me know in the comments! And be sure to check out the other two posts for The Weekend here and here!