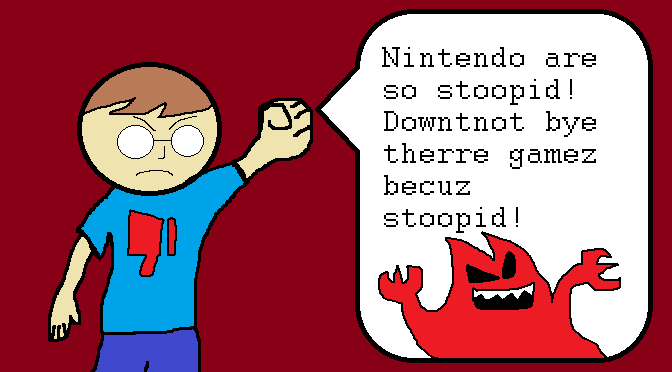 This post might seem a little bit like I’m preaching to the choir. For those of you unfamiliar with that particular Southern saying, it simply means that it’ll probably seem like I’m trying to teach a lesson to the people who learned the lesson already. Because I know that if you’re reading this article, you express your distaste in a tasteful way. You never angrily hit “dislike” on a video about a game you’re disappointed in and then type angry messages in the comments. You never call a game developer names on social media or criticize their business plan. Because the people reading this post are the kind of people who know how to effectively tell a company that their decisions aren’t appreciated by the fanbase.

But hey, just in case one of those “trolls” I’ve been hearing about happens to accidentally stumble upon this…

Nintendo has been a bit odd lately. It really started back in E3 2015 when pretty much everything they showed off was what fans had been asking for – except not really.
– “We want a home console Animal Crossing!” Absolutely, here’s a board game.
– “We want a new Metroid Prime!” You got it, check out this game about four guys who aren’t Samus and play soccer.
– “We want a Paper Mario like The Thousand-Year Door!” You said Sticker Star, right?
– “Please show us Zelda Wii U!” Uh, what about Triforce Heroes? Or Hyrule Warriors Legends?

It was a pretty disappointing year for Nintendo fans, and back then a lot of people didn’t know how to express it. So they found every video game journalist, blogger, and Youtuber that spoke about these disappointing titles and told them EXACTLY how they felt about it. Disliking people’s videos, posting incredibly hateful comments or pseudo-intellectual rants about how “foolish” and “blind” Nintendo seems to be. And naturally, all of that online hate and trolling totally taught big bad Nintendo a lesson, right? Right?

Here’s the thing, folks. E3 2016 just came to a close. And Nintendo still doesn’t seem to completely understand what fans are and aren’t excited about. They didn’t talk about Metroid: Federation Force, but it’s still slated for an August 19th release. Paper Mario Color Splash is still a Sticker Star sequel and still seems to have a lot of problems people complained about in the first game. Fans were hungry to hear ANYTHING about the NX, but Nintendo stayed silent. Another E3 has come and gone, and as the natural high from Breath of the Wild dies down (though let’s be honest, that’s gonna take a LONG time) people are beginning to talk about the parts of E3 that made them frustrated again.

And where are they doing this, you might ask? Not journalistic platforms. Not in well-written reviews or polite-but-serious letters to Nintendo. Instead, it’s happening on the videos and websites of the hardworking journalists and content creators whose only crime was to cover a game fans are angry about. Ever heard the phrase “don’t shoot the messenger?” There are a lot of dead messengers lying around, and one year’s time has already shown us what good that did.

If we as longtime Nintendo fans are going to continue to be angry about their direction, we need to find a healthier, more effective way to vocalize that anger. Spouting profanity in the comment section on an IGN article or a GameXplain video is not going to accomplish anything except make you look like a tool. So let’s talk about the right way to express frustration at the big N.

DISLIKE THE RIGHT VIDEOS
I doubt this one is really going to accomplish much, but it just gets on my nerves. As something of an amateur game journalist, I know this would hurt me a lot if people did it to me. A blogger posts an article or a video on Federation Force, and suddenly everybody and their brother is downvoting them or disliking them or whatever button their website happens to provide for expression of disdain.
Guess who that hurts? Not Nintendo. The content creator.
If clicking a “dislike” button is just something that you really need to happen, then click the “dislike” button on the right video. Go to Nintendo’s official page on Facebook and react to their post with a little angry face. But don’t hurt the exposure or self-esteem of a journalist just because they’re doing their job. It accomplishes nothing.

PLAY THE GAME FIRST
This is a big one. I don’t care how terrible the trailer looks. You do not know whether or not you’ll like a game until you actually sit down and give it a try. Federation Force may be the most incredible Metroid Game ever released. Color Splash might be the most fun and funny Paper Mario game in the franchise. Or they could both be an insult to the fans who so love those series. But you don’t know that without grabbing a controller and experiencing the game firsthand. To use yet another saying in this post: don’t knock it til you try it. Go to a redbox or get a Gamefly account and rent the game for yourself.

Now assuming that yes, you were right, the game is terrible and you never want Nintendo to make another game like it ever again, here are some ways to try and facilitate change.

DON’T BUY THE GAME
Nothing speaks more loudly to a company than sales numbers. Those numbers are often why games that we really want don’t get localized or get sequels or whatever – not enough people are spending that cash money. So say you’ve rented the game, tried it out, and it is indeed bad. DON’T BUY IT. When Nintendo fails to sell units and the game doesn’t make them much, they’ll have to sit down and reevaluate it. This is where the next part becomes really important.

POST A REVIEW
So say part one works: nobody bought Color Splash because it was terrible and now Nintendo has to sit down and evaluate what went wrong. They could assume that fans just don’t care about Paper Mario and decide to never make another one again. Now that’s not what you want, right? You don’t want Paper Mario to go away – you want it to make a comeback as the RPG series you loved as a kid (okay, “you” may be “me” in this instance). But if you’ve only posted those sentiments in the comment section of an IGN article, Nintendo is not going to know that. That’s why it is important than when you don’t like how a game turned out, you review it.
There are a decent number of websites that allow fans to submit ratings and reviews. Metacritic is a pretty solid review site that not only aggregates critic scores but fan scores as well. Amazon allows you to rate a game from 0 to 5 stars and to say what you did or did not like. Post a review on social media and tag or share it properly so that it would be visible to Nintendo. If you have a blog, utilize it! You can also facilitate this process by liking, sharing, retweeting, and reblogging other reviews that reflect your opinion. Sales are how the company knows that something is wrong – reviews tell them exactly what went wrong.

CREATE A PETITION
Now some people may read this step and think “you’ve gotta be kidding me.” Petitions get something of a bad rep because they’re so easy to create on the internet that pretty much anybody can petition for something really stupid. But here’s the thing – bad petitions don’t get good signatures. People don’t get behind them. A sensible, well-written petition with the force of reputable supporters behind them can truly affect change. Phrasing has a lot to do with it. A petition born of hate – “petition to cancel Metroid Federation Force” – is a lot less effective than a petition born of concern and respect – “petition for the development of a 4th Metroid Prime game.” See the difference? The first petition is asking Nintendo to get rid of something they’ve worked hard on. The second petition is asking them to keep creating something that you love and appreciate. Which one do you think is more likely to spur them to action? Spoiler alert – the second one.

Are these steps fullproof? Nah. Any developer can hear the outcry of their fans and choose to ignore it. But if fans are vocal in a more effective manner, if we voice our opinions in a way that actually reaches the eyes and ears of Nintendo, that can be the beginning of real change.

At E3 earlier this week, there was a success story that got somewhat lost in all of the excitement of other things going on. That success story was for a little game that I am incredibly excited about: Dragon Quest VII – Fragments of the Forgotten Past. The game is a 3DS remake of a PS1 game, a remake that streamlined the experience and made a lot of improvements in graphics, gameplay, and story pacing. This remake has been out in Japan for some time, and the creative team behind it admitted at E3 that they had no intentions of releasing it in America. The game is so full of text, the story so detailed and long, that the idea of translating it for a Western audience was too daunting. Then, fans became vocal – they begged the company to go through the pains of localization and to release the game in the states. Fans were so vocal and so expressed their desire to play Dragon Quest that the developers said “okay, here ya go.” A similar success story was the reason that American fans were able to play Xenoblade Chronicles.

See how that works? If you reach out to a company with a message of positivity rather than hate, they’re a lot more likely to give you what you want. Developers DO listen, and they DO care about what fans want. But they ignore the trolls and the profanity and the hate – it’s what they have to do to continue to succeed. I titled this post “The Right Way to Hate a Game,” but in reality hatred is not the solution at all. If we as fans want Nintendo to make the games we truly desire, we have to show them not our disdain for what they’re giving us right now, but our love for what they gave us in the past, and our desire for more of it.

One thought on “The Right Way to Hate a Game”