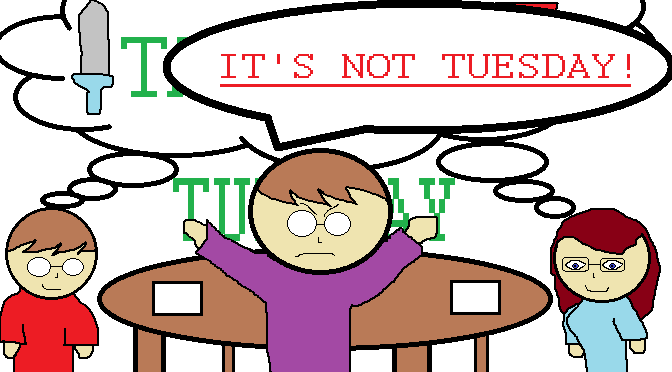 Okay, so it’s 1:35 AM on Sunday morning, I know I’m gonna be traveling Monday, I just came back from this week’s Dungeon World session, and I don’t want to miss another post because of being on the road. So we’re gonna do two days of tabletop posts in a row! Hurray for Tabletop Monday!

Today I want to talk about my experience with Dungeon World’s “fronts” system. This is less of a rigid game mechanic and more of a suggestion of how to organize your storyline in an easily-accessible way that you can switch seamlessly between. The term fronts comes from the phrase “war on two fronts,” representing that you can’t be everywhere that you feel like you need to be. While the players are focusing on one front, the others grow and change. Things happen offscreen that they don’t see, and then later those things might have become significant threats.

When I first started being a gamemaster for my tabletop group, I organized my sessions in a very rigid way. I would write out exactly how to describe each place and each person, I’d write out monologues for supporting characters or villains, and any place where the players had a “choice,” I’d have a path designed for each option and based on what they picked just skip a paragraph or two of text and go to whatever path they decided on. If you’re a tabletop gamer, you probably see that and immediately think “wow, it seems like you railroaded your players a lot.” And you’re right. My options weren’t very optional, and they forced the players to experience my pre-planned, brilliant storyline exactly as I designed it.

Now this isn’t to say that planning out a story is bad. I have been in games where the GM has done a planned story in an elegant, satisfying way. And I have been in games where the GM did an improvised story in a directionless, frustrating way. No one path is inherently good or bad. The trick is finding which one works for the GM and the players, and then avoiding some of the pitfalls of the path. Dungeon World’s answer to this conundrum is the front system.

Fronts works like this. You name the front, and figure out what locations are involved in it, what characters, and what themes. Each front has stakes, questions that should be answered by the time the front is resolved – but you as the GM do not plan out these answers. The GM wants to know the answers, and the players unwittingly provide them as they play. The biggest part of a front is the dangers within it. Dangers are big-picture problems; the squad of six goblins is not a danger, but the entire goblin army with the ultimate goal of taking over the nation’s capital is a danger. Every danger has grim portents, preventable bad things that can come to pass. Each time a grim portent is allowed to grow unchecked by the players, the danger gets more, well, dangerous. Multiple grim portents coming to pass can lead to impending doom. This is the really bad thing that happens when that danger gets what it wants.

Because each front effectively consists of just stakes questions, dangers, and their portents and doom, they fit pretty conveniently on index cards that you can sift through at will during play. Because players may be dealing with multiple fronts at once, this can be quite helpful in keeping them organized. Inevitably a band of adventurers is probably gonna open up fronts that fall by the wayside – the GM then must decide if the threats within that front warrant stepping up to the full campaign front, moving to a different adventure front, or just being cast aside altogether.

I’ve been trying to put fronts to good use, but they don’t quite work for me. Most of the time I find myself not marking off any of the grim portents in a front. The session is busy, a lot of things happen, but none of them necessarily apply to a specific condition of the front. I’ve created multiple fronts that have just been tossed aside, because circumstances dictated that they didn’t become significant and there was no reason to keep them around. I mean, I guess fronts are a good way to keep things organized, but they really just don’t work for me.

I guess what I need is something between fronts and the huge, word-by-word pages of session planning. There has to be a middle ground where the story is open to the players’ input but is also planned out and interesting. There has to be a balance to being adaptable and being organized. I wish I could tell you what it is, but now it’s 2:03 AM and I honestly don’t know.

What do you think, adventurers? How do you organize a session when you GM? If you’re a player, do you like a good story or do you like having freedom to stretch your wings? If you’re familiar with fronts, how do you feel about them? Let me know in the comments, along with letting me know what universe you’d like me to write about for May’s Fanfic Friday. I’m still looking for ideas, so don’t leave me hanging!