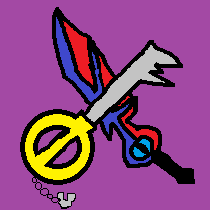 When Kingdom Hearts: Dream Drop Distance (get it? 3D? It’s on the 3DS? Ahahahahahahahaha) first came out, I picked up the game and played it. I’ve been a fan of the series for a long time – I started with Chain of Memories on the Game Boy Advance. Yes, I know, everybody hates that game, but I didn’t have a Playstation at the time. Anyway, when a backwards-compatible PS3 came into my life I played the first and second games, and later on would play 358/2 Days (or however the heck you say it), Re:Coded, and Birth by Sleep. So when Dream Drop Distance came out, I was really excited to play it. I started the game, jumped in, and thought it was pretty cool until this one little thing.

“Dream Eater? Isn’t that a Pokemon move?” Yes, but this is a different kind of dream eater. Dream Eaters are the Heartless knock-offs of this particular Kingdom Hearts title, but they are not just your enemies – they are your allies, too. Crafting and training these little monsters replaces the typical party member system of Kingdom Hearts, and characters like Donald and Goofy are seen only in cut scenes, never at your side.

When I first saw this, I was indignant. “How dare they replace classic Disney characters with these goofy monsters? These ‘dream eater’ things are useless, they don’t even do anything! Ugh, this messes up the game so badly.” Although I enjoyed Dream Drop Distance as a whole, the Dream Eater thing really frustrated me and so I kind of ignored the little critters.

To understand why Dream Eaters made me so mad, you have to understand that in 90% of the series that I play, having monster allies instead of characters that are party members with personalities really messed up the game. Take the Tales series. Tales of Symphonia was brilliant – then the sequel had to go and have monster recruitment, and suddenly a series that’s usually focused around a cast of complex characters was reduced to focusing on only two, with poorly-done cameos of the first game’s cast. Then there’s the Dragon Quest series, where the fifth entry used monster mechanics instead of party members and the game became a lot more difficult. Human allies were always more competent than monsters (unless of course you grind for hours on end to be lucky enough to tame the strongest monsters of the game), so any section of the game where only monsters could be in the party left you high and dry. So when Kingdom Hearts threw in monster allies, I dismissed the concept immediately and did not delve deeply into it.

Fast forward to roughly a week ago. I decide to start playing the game again, and though this time I’m still not excited about Dream Eaters, I decide to give the mechanic a second chance. And you know what I’ve learned? The spirit system in KH3D is actually pretty solid.

Obtaining spirits is a really easy process. In most games, you have to defeat them in battle and then just pray that they happen to want to join you. With little or not way to influence what joins you when, this process often feels out of your control and unrewarding. Dream Eaters don’t work that way, though. You craft them out of materials you collect when you defeat nightmares (bad Dream Eaters). You can also buy these materials. Now you can create spirits by using recipes you gain throughout the game, but you can also just shove random pieces together to see what you get. The cool thing is, you can see the results of combining pieces BEFORE you waste them, so you know roughly what you’re going to get and whether you have that kind of spirit or not. This makes getting new spirits really simple – you know what you’re gonna get, it doesn’t waste time, and you can add new spirits into your party at a pretty decent pace.

Now admittedly, spirits are pretty useless party members – they never seem to be defeating nightmares and more often than not I get them mixed up with the enemy, taking a few fruitless swings at my allies during combat.But here’s the thing – party members are always useless in Kingdom Hearts. Even the classic duo of Donald and Goofy is rarely helpful. Donald, in particular, has a nasty habit of never casting healing spells when needed, even if those are the instructions you give him.

Going back to Tales of Symphonia for a minute, that’s an example of a game that has a fantastic ARPG party system. You can give each AI character very specific directions about where to stand on the battlefield, how to behave in combat, what enemies to attack, how much energy to use, and what to use their energy on. You can change these instructions during combat to suit the situation, and if you ever need them to temporarily break with their plan, you can give a single order for the character to obey. This level of customization makes the AI very solid, and party members rarely do stuff you don’t want them to. With party mechanics like that out there, Kingdom Hearts simply can’t compare.

The point is this. Since party members are useless in Kingdom Hearts anyway, losing the Disney characters in exchange for monsters really isn’t that noticeable in the mechanical sense.

Now the best part of spirits is the part I’ve saved for last. You can have up to three of these spirits on your team at a time (though only two can be active at once). The more you fight with a spirit, the more abilities you can unlock. Here’s the kicker, though – spirits unlock abilities for you, not for themselves. Want stronger cure spells or longer combos? Train up the right spirits and you can have just that. As you switch between Sora and Riku, you can train the same spirits with each character in order to unlock their abilities faster, or you can focus on different spirits with each one to develop different fighting styles. Personally, I’ve been focusing on magical spirits with Sora and physical spirits with Riku, and it’s a lot of fun. Having different abilities on each character and training up different spirits adds variety to the game, particularly in the earlier parts where Sora and Riku don’t have any of their exclusive abilities.

I guess the moral of the story today is, don’t knock a game mechanic before you’ve even experienced it. Although I traditionally don’t like games that replace character allies with monster ones, Kingdom Hearts did it pretty well. If you’ve not played Kingdom Hearts 3D and you’re impatient for Kingdom Hearts 3 to come out, maybe check this game out in the meantime. Storywise, it connects all the other games and sets up the next game quite nicely. If you’re not a Kingdom Hearts fan, maybe you oughta consider trying a game you’ve been thinking about but that isn’t a genre or style you normally enjoy. Until you play it for yourself, you really don’t know whether you’ll like it or not. So have an open mind – it can lead you to some fun new games!