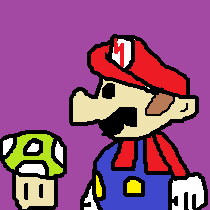 Well, adventurers, I’ve calmed down a bit from the news and now I believe I can speak intelligently on the subject of an upcoming Paper Mario. If you missed me fangirling yesterday, allow me to bring you up to speed: there’s a rumor going around that there’s a new Paper Mario on the way, and I am very excited. So today I thought we’d talk about my hopes for a new Paper Mario game.

Hope #1: It isn’t on Wii U
Okay, this may seem like a weird hope, but honestly, I don’t want to get a Wii U. There are so few games available for the console that I actually want to play, that I’d basically be buying the system just to play this. I’d prefer if it was released on the NX (which is apparently coming out this year anyway) or on the 3DS (which I already own). The main way I’d be okay with this game releasing on the Wii U is if the NX is backwards compatible, because at this point I’d honestly rather get the new console than bother picking up a Wii U.

Hope #2: It’s a successor to The Thousand-Year Door
Super Paper Mario and Sticker Star both changed up the Paper Mario formula, and while I enjoyed Super Paper Mario (don’t even get me started on my hatred for Sticker Star), I want the newest Paper Mario to build upon The Thousand-Year Door. Turn-based combat with action command mechanics. No platforming, no ridiculous stickers. I want partner characters to make a return, badge customization to be present, and for the game to be segmented into chapters that all have unique areas to explore. Ultimately, I’d like this Paper Mario to be the sequel I always hoped for but never actually got.

Hope #3: It’s set in a New World
One of my favorite things about The Thousand-Year Door is that the game is set in a world that players don’t usually get to experience in a Mario game. The new setting is fun to explore and makes everything feel fresh. IF for some reason this game is set in the Mushroom Kingdom, then I would like each chapter to be set in a totally new area, somewhere in the kingdom we haven’t seen yet.

Hope #4: The world is full of New Characters
Probably the most frustrating thing about Sticker Star (yeah, it’s pretty much inevitable that I’m gonna talk about it at this point) is that the game has no new characters introduced to the Mario world. It’s about Mario, Peach, Bowser, and a bunch of Toads. If I wanted that, I’d go back and play Super Mario 64. What makes Paper Mario stand out are the fun, quirky characters that populate the game. Take those away and what do you have? Garbage, that’s what. Fun sidekicks, goofy villains, weird townspeople, the Paper Mario universe thrives on that stuff.

Hope #5: The game tells an Epic Story
One thing I dislike about the progression of the Mario series as a whole is that the games have gotten simpler and more bare-bones with every installment. It’s like Nintendo thinks that kids don’t know how to read, or understand any story more complicated than “hero saves princess from turtle.” I understand that Mario is aimed at a young audience and that the story doesn’t need to feel like a Square Enix game – I get that. In fact, I don’t want that to happen any more than I want the game to just be a story about Mario rescuing Bowser explained entirely through the pop-up letters sent by Peach (yeah, I’m calling you out, Super Mario 3D Land). Paper Mario, The Thousand-Year Door, and Super Paper Mario all managed to tell a great story without it being too complicated or too grandiose. But those stories were solid, and for people who went the extra mile and explored the nooks and crannies of the world, those stories became even more detailed and interesting. That’s the kind of story I want. Something that’s straightforward on the surface for younger players but has rich details that older players can explore if they’re driven to.
And please, Nintendo, can that story be presented through actual dialogue? Intelligent Systems is brilliant at dialogue. Their writing is superb. Let them do their thing and flex their creative muscles. It’ll result in a great product.

Hope #6: The game doesn’t Play it Safe
What do I mean by “safe?” Well, “safe” is the direction chosen for Sticker Star. The decision was made that the game shouldn’t take place outside of the Mushroom Kingdom, shouldn’t feature new characters that people may not like, all in the interest of taking a safe approach to the game. I’d like to see the game do something new. That “safe” nonsense is best saved for third-party AAA titles that people are gonna buy whether the game is good or not. For a game like this, new territory needs to be broken for the game to really be fun.
I don’t just mean this one to bash Sticker Star, either. If this game comes out and it is exactly the same as The Thousand-Year Door – no changes to the formula, no advancement other than graphical, no risks taken at all – that game will be boring too. Super Paper Mario may not have been received well for its experimental nature, but at least that game TRIED something! I’d rather have another Super Paper Mario – still solid but not as good as the original games – than another Sticker Star. Dang it, I did it again.

Hope #7: The partner formula is Changed
The first two Paper Mario games had some themes in common, and perhaps the strongest commonality between them was in the group of partner characters available to you. While some are certainly more unique than others, there are a number of party members that have very similar functions in each game. A smart Goomba, an explosive Bob-Omb, a shell-flinging Koopa – many partners fulfilled the exact same roles in the party without actually making any change or doing anything unique.
I’d like to see the partners in the next Paper Mario be a completely different cast of creatures. What about a Shy Guy or Toad partner in the party? Maybe include a Magikoopa. Or a Wiggler. Heck, even a Pianta would be a nice change-of-pace. As I’ve already said, while I want this game to be a successor to the first Paper Mario and to The Thousand-Year Door, I don’t want to see the games become stagnant, either. New partners would be an awesome way to mix up the formula and I think a lot of fans would be okay with that kind of change.

Hope #8: Peach and Bowser maintain their Paper Mario Characterization
What the heck does that mean? Well, Peach and Bowser’s personalities are drastically different in Paper Mario compared to what they are like in the main series. In traditional Mario games, Bowser is somewhat mindless. He can talk, yeah, but mostly in boring trash-talk, and all he talks about is kidnapping and conquering and yada yada. He’s got no personality. And Peach is reduced to a cake-baking damsel-in-distress, or as a totally silent sidekick who is just a pallet-swap for Mario without actually having her own unique character.
In Paper Mario, these characters are different. Bowser is funny. REALLY funny. His character is one of the most refreshing aspects of the games and I would just die if another Paper Mario game was made where he’s reduced to his growling, grumbling self from the main series. Peach is still kidnapped, yes, but she’s smart and manipulative, able to bend the situation to her will and discover crucial information that Mario needs. Her chapters often involve a degree of stealth and puzzling that’s a refreshing break between chapters, and I don’t want to see that taken away from her. Peach has the potential to be a strong female role model, so take the opportunity!

Hope #9: A new Villain is Introduced
In the first Paper Mario, Bowser was the bad guy. That’s cool, it made sense, and he’s well-written enough and the formula changed up enough that it worked. In The Thousand-Year Door and in Super Paper Mario, Bowser was present – even sometimes a villain – but not the main villain of the story. There were new villains that represented great threats to the world, and facing off against unknown enemies was a really fun aspect of those games.
The best part is that each villain was different. Grodus was creepy and ruthless, a great foil to Bowser’s hilarious and bumbling antics. Count Bleck was misunderstood and made the player empathize with him, which was great when he was ultimately betrayed by the quirky but powerful Dimentio. The Paper Mario games have wonderful original villains and I’d love to see a new one for the new game.

Hope #10: This game is actually Paper Luigi
Okay, yes, I understand how very impossible this is. This is a totally selfish, completely personal hope that I do not believe will actually ever happen. But I love Luigi’s character so much, and having a game focused on his adventure and not Mario’s would be really fun. I’ll settle for having him be a playable alternative to Mario with unique abilities. Although if he’s in the game in the same way he was in The Thousand-Year Door, I absolutely will not mind it.

There you have it, adventurers, my 10 hopes for the next Paper Mario game. I’m sorry that half of this ended up being a hate-rant about Sticker Star. The Paper Mario series is one of my top favorites – right there with The Legend of Zelda and Fire Emblem. And the last game to appear in the series was one that I found disappointing and that didn’t capture the spirit of what the series is about. Trust me, when Fire Emblem: Shadow Dragon came out, I was this angry and this passionate about what the next game would be like for that series. If you have your own hopes for what a new Paper Mario would be like, be sure to comment with your ideas. Let’s hope that this rumored entry to the series is real and that it will be the greatest Paper Mario yet!