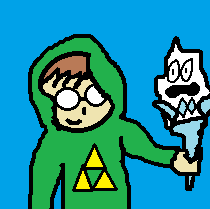 It’s still a snowy mess here in Kentucky, so the Weekend of Winter continues! Regardless of genre, most games have a few certain locations they rely on. These locations are based on real-life places and conditions. You know what I’m talking about: how there’s always a “water level,” and there’s always a “forest stage.” Well with all the snow around I figured now would be as good a time as any to talk about the “ice stage” that seems to show up in every game.

You know the place. There’s a ton of ice everywhere, and whenever you step on it you slide along in a straight line so you can’t control where you’re going. Big chunks of ice block your way and you have to figure out how to melt them. Enemies are all giant yetis or constructs made of icicles, and every monster has ice breath that can freeze you in place and stop you from progressing. It’s as if no one has any ideas about how to do ice levels in a different way.

Something else that’s an interesting trend is that ice levels almost always appear towards the end of a game. In Legend of Zelda, Paper Mario, Pokemon – lots of games with a forced story progression. In settings like Mega Man or Metroid where you have a bit more choice in where you go at what time, you can visit ice levels earlier. But whether it’s because of the slipping or the yetis or the constant freezing in a solid block of ice, something about these levels makes them more appropriate for the end of the game – at least in the eyes of developers.

I tend not to enjoy ice levels when the conditions are used as a complication and nothing more. It’s usually more fun when the sliding around is part of a puzzle you have to solve. Pokemon and Zelda are pretty consistent about using ice this way. These sorts of puzzles are also seen in the Golden Sun series (which I should really blog about some time, because I keep mentioning it off-handedly like this). But even ice puzzles are always done the same way – you have to slide in just the right pattern to push some icy blocks into holes so that you can then slide on the right path. Or you have to recklessly slide between obstacles in such a way that it allows you to progress instead of trapping you at a dead end.

When a gaming trend happens often enough that it could be considered formulaic, it’s probably time for a change. I have a few thoughts on some changes that could be made to the traditional approach to ice levels to make it a bit less predictable when you jump into a game.

Enemy Variety
I’ve always thought it’s kind of silly that in every environment in video games that enemies are always creatures that “fit with the theme,” so to speak. Volcano area enemies all have fire powers, forest enemies all use camouflage, ice stage enemies always have ice breath. I understand that sticking with a theme perhaps makes sense from a Darwinian adaptation perspective, but it certainly makes things boring as a player. Why not have enemies that are adapted to the environment but in a way that’s not so straightforward? A fire-based monster in an ice area could actually melt the ice to go where it wants, and its ability to create fire would keep it warm in the cold conditions. Yet as a player, encountering a fire-elemental opponent in an area where you’re expecting ice forces you to change your strategy. Rather than having huge burly yetis all the time, why not have some stealthy tundra predators whose white-and-grey patterned bodies blend into the environment and make them difficult to fight? Simple changes can turn around ice levels from being the homes of massive behemoths and fragile constructs into challenging areas that test all of the skills the players have developed over the course of the game.

Early-Game Ice
Of course, it may make things more interesting to change the location of ice levels entirely. Rather than putting ice-based challenges at the end of the game, why not start with them at the beginning? In a game where elements are important to the game mechanics, an ice area is a great opportunity for a tutorial about how the different elements interact with each other. Or perhaps the icy conditions are perfect for someone skilled in parkour and urban exploration to have their abilities tested for the first time. Designing the game world in such a way that players experience an ice area early instead of late would be a refreshing take on the tired mechanics of ice levels.

Alternative Ice Puzzles
While I certainly enjoy a good sliding puzzle, there are other ways to take advantage of icy conditions beside slippery ramps and melting the ice. Why not make a puzzle out of survival? Most games just assume that your character can magically handle the temperature, and things like shelter and food aren’t ever a factor. But imagine having to deal with the poor visibility while hunting wild game for your meal, then looking desperately for a cave or building a snow shelter before the icy conditions defeat your character. Perhaps the challenge of the ice level comes from the fact that you need to wear gear that’s thermal, not protective, and your reduced armor score forces you to approach combat in a different way while you’re in the icy conditions. Puzzles are made that much trickier when they’re done in a way that the player hasn’t really seen them before.

Those are some ideas I have about making ice more interesting in games. But how do you feel about it, adventurers? Do you like ice levels as they are, or would you like to see them changed up somewhat? Feel free to comment with some of your own ideas about how to make icy stages more interesting for players.