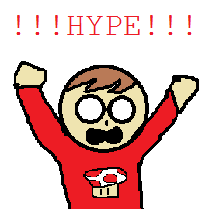 Adventurers, you are about to witness something that I am not proud of. But it must be done. The rumor is here, my excitement is over 9000, and this post is all pure, raw reaction to the news.

Maybe. I guess I should include the maybe. This is just a rumor, no official confirmation from anybody at Nintendo. But the source of the rumor is reputable and claims to have at least five sources. True or not, the damage is done. A fire that has burned within me for ages – one that was doused but still simmered beneath the surface – has now been stoked. I want this game so badly, adventurers. SO BADLY.

Let me try to calm down for a second and type words that make sense. Paper Mario is a series that’s been around since I was a kid, and it is a series that’s been experimented with quite a bit over the years. The minds behind it are the ladies and gentlemen of Intelligent Systems. You may know them for another favorite series of mine: Fire Emblem. The game designers at Intelligent Systems make quality stuff with well-written dialogue and compelling story. When left to their own devices, anyway.

The first two Paper Mario games were turn-based RPGs with a twist: the action command. This is something that carried over from Super Mario RPG and has since continued on to the Mario and Luigi series. Action commands are basically the go-to mechanic for a Mario RPG. It involves timed button presses to make your attacks and defenses more effective. The third Paper Mario game, Super Paper Mario, was a platformer inspired by the original Super Mario Bros. Then there was Sticker Star, which went back to the turn-based action command formula but using stickers that were spent 1-for-1 to use abilities during battle. Finding and collecting these stickers became the game’s core mechanic.

Now gameplay is important to Paper Mario, but what defines the spirit and atmosphere of the games? Three things, really: unique worlds to explore, a compelling story, and new characters to meet. And whether the spirit or the gameplay is more important is where things start to get tricky when it comes to Paper Mario. The first two games meet both standards pretty much unanimously – it’s hard to find a Paper Mario fan who doesn’t love both the original and The Thousand-Year Door. The third game, Super Paper Mario, has the spirit of a Paper Mario game, but not the gameplay fans had become accustomed to. And finally, Sticker Star’s gameplay more closely resembled the original games, but much of the spirit was lost. So which is more important?

I’m sure my opinion is pretty obvious. For me, the spirit is what makes the biggest difference, what makes Paper Mario truly special. Some only care about the action command gameplay, while others think that both aspects are necessary to make a true Paper Mario game. So with a new game potentially in the works, all Paper Mario fans are going to be focused on one question: what kind of game is this gonna be?

I think I speak for a lot of fans of the series when I say that I hope the game goes back to the formula from the first two games. The original Paper Mario and The Thousand-Year Door were amazing, and even though I loved the story and characters of Super Paper Mario, I miss the combat and badges from the original games.

If this game is like Sticker Star, expect a post similar to this one, except angry. Sticker Star is garbage. Without fresh faces, new worlds, fun dialogue, a compelling story, the game’s only resemblance to the rest of the series is the fact that Mario is made of paper.

Okay, I’m done ranting. And I apologize that this post is constructed like a middle school personal narrative. I’m just so full of energy and excitement and expectation while also being full of fear and worry that the game may not be what it has the potential to be. I want to keep typing, but I also need to settle down and calm my nerves. So for now, I’m going to leave things off here. In the coming week I’ll post about some things I’d like to see in a new Paper Mario game.

If you’re seeing this post but didn’t get to see the first part of the Weekend of Winter, be sure to check that out. I won’t make a habit of posting twice a day, particularly this close together, but as I said, this is my raw reaction to the news and even though half of it doesn’t make sense, I still wanted to get it out there. If you too are excited, feel free to fangirl in the comment section.