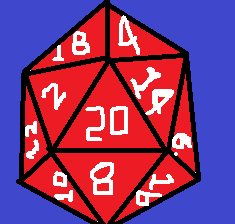 As many adventurers will already know, I’m developing a tabletop RPG of my own design based primarily on the Myers-Briggs theory of personality. If you haven’t read about the project yet, you can check it out here. Today, I’m going to go into a little more detail about the game mechanics themselves, specifically the mechanics in the game’s Real World.

In the Real World, all the players work together as one Protagonist, a corporate middle-man (or woman) stuck in a rut with little power to affect change in his or her life. As a group, they will make decisions for this character and describe his or her actions.

The day-to-day activities of the Protagonist will be decided primarily by the Ego (the term for the GM in this game). Time in this game – at least in terms of what month it is, what weekday it is, etc – is very important. I can even see the game coming with some kind of streamlined, non-specific calendar to keep track of what day it is, what the Protagonist’s work schedule is, and to keep appointments and write down important future events.

Why such an emphasis on time? Because events in the real world are different depending on what day it is. If the Protagonist is off work, his or her activities will be very different than the ones he or she faces at work. If it is a birthday or holiday, it will affect what is happening to the Protagonist as well. These real-world details tend not to be important in most tabletops, but for this game this realism is necessary because it keeps the real world interesting. If Myers-Briggs RPG doesn’t have a satisfying real world, then the players and the Ego will just want to stay in the dream world. And at that point, why not just play Dungeon World or Shadowrun or whatever your RPG of choice might be?

Anyway, as I was saying, the day-to-day events will be decided by the Ego. This can be done at random with a dice roll (I’m thinking a d100 roll using percentile dice, so that there are PLENTY of options), or the Ego can just pick an event on their own. These events will be different depending on whether the Protagonist is working or at home, and they will be highly varied. Maybe one day he or she has to call in sick. Maybe the Protagonist will have to fire somebody. Or train a new employee. Or sit through a long meeting. Or make a long drive to another branch. All of these different scenarios will keep the real world varied and interesting, while also creating opportunities to use the Protagonist’s stats in different ways.

If you recall, the Protagonist’s ability scores are based on the eight preferences of Myers-Briggs: Extroversion, Introversion, Sensing, iNtuition, Thinking, Feeling, Judging, and Perceiving. The number value of these scores will be 1+the number of questions answered towards a certain preference on a Myers-Briggs test. So stats will fall anywhere from 1 to 8; a high ability score will typically be 6 or 7, while a low ability score will typically be 2 or 3.

These stats are currency that the players can spend while in the real world: sometimes voluntarily, sometimes not. Here’s how it works. When the Protagonist performs an action in alignment with a particular preference, he or she must spend a point from it. So spending the whole day alone reading would cost a point of Introversion, while spending the day in a busy meeting would cost a point of Extroversion. The higher the Protagonist’s score in that preference, the more actions of that type they can take without tiring out. So a character with 6 introversion and 3 extroversion could read alone twice as often as he could sit through a busy meeting, which makes sense, right? He’s introverted, so he tires of forced social situations quickly.

As I mentioned, there are two ways to spend these points: intentionally and unintentionally. Intentionally would be the players deciding that the Protagonist wants to spend the night hanging out with friends (an extroverted action), or making a decision logically rather than emotionally (a thinking action), or deciding to skip work on a whim rather than adhere to their schedule (a perceiving action). These are all decisions that the Protagonist makes. Conversely, an unintentional action would be something that the Protagonist has to do because of circumstances or orders from someone in authority over her. Maybe her husband drags her to a sporting event (extroversion over introversion), she’s forced to fire her best friend because his work is inefficient (thinking over feeling), and a burned casserole means she has to go to the grocery store before her scheduled day (perceiving over judging).

Do you see how in both of these situations, the same TYPE of actions are taken, but sometimes it is willfully and sometimes it is not? That is an important game mechanic, because sometimes circumstances that the players cannot avoid will force them to spend certain points, increasing their risk of tiredness.

Of course, tiredness comes into play. Let’s say a Protagonist who is primarily Sensing (and therefore would have a low iNtuition score) notices that her son is not well. She doesn’t hear him coughing or see mucus or anything; she can just feel an air about him that suggests he isn’t well. Noticing this taxes her iNtuition and puts her score down to zero. Then at work, she is put into a situation where she has to analyze statistical tendencies for her office. Sure, she can read the series of numbers with no trouble, but understanding their implications is going to tax her iNtuition even further. But her iNuition is already zero, so what happens? The Protagonist becomes exhausted, and the point she would normally spend for that action comes from her Sensing score instead. However, that point is no good for the dream world – it is set aside, representing a moment of dreamless sleep caused by exhaustion. Once scores are down to zero, the actions taken for them no longer have any value in the dream world while also stealing good points from other abilities. Becoming tired is something the players will want to work together to avoid.

So how could that Protagonist have avoided it? Well, perhaps she is extroverted and decides to share her problem with a coworker. She doesn’t have to deal with the problem directly and instead spends a point of her very high Extroversion stat. Finding loopholes like this and figuring out ways to tax a different ability instead will be very important for the players.

When it comes to character advancement, there are no experience points or levels in the real world. Instead, the Protagonist can have helpful passive abilities that change how he spends points or alters situations in a favorable way (think advantages from Mutants and Masterminds, or perks from the Fallout games). When the Protagonist has a breakthrough (something that can happen only with help from the dream world), he can choose one new ability from his list of options. Abilities don’t have tiers – one isn’t necessarily more powerful than another. Instead, they have categories. Some abilities may only be available to extroverts while others only to introverts. The four temperaments (Guardians, Artisans, Rationals, and Idealists) will each have unique abilities, as well as the sixteen types. This means that while every Introvert may have some abilities in common, that Protagonist would be very different from one that’s a Rational instead of an Artisan. And even if they both are the same temperament, INFP and ENFJ still have some abilities that the other cannot get. This allows each Protagonist to be unique and have some exclusive abilities, which is great for replayability. Yes, there is eventually a finite number of combinations, but you can play different campaigns of Myers-Briggs RPG and still have very different Protagonists based on what personality the character has.

Finally, there’s getting to the dream world. Obviously, the Protagonist has to sleep, right? Well, not necessarily. Sleeping for the night will be the main method of entering the dream world, as that means that the players have had a full day to accumulate time in the dream world by spending points. However, perhaps the players have a relatively simple problem that they want to solve quickly without having to finish the day, go home, and go to bed. In this instance, the Protagonist could daydream – having way less functional time in the dream world, but able to create change in the moment instead of having to let the moment pass by and fix it later. Daydreams will be a helpful way of eliminating smaller problems in the Protagonist’s life, whereas a longer dream at night will be important for solving bigger issues. The other big difference between a daydream and a good night’s sleep is that lost stat points will recover after sleeping, whereas a daydream does not restore the points spent on it. A nap could perhaps be the best of both worlds, but the opportunity to take those is rare in the busy life of the Protagonist.

That’s what I have right now for the real world game mechanics. I hope soon to be able to talk about the dream world game mechanics, but those have been trickier for me. I’m trying to create something that feels like a more traditional tabletop game while also not just hacking an existing system. If you have any suggestions or any feedback on the real world mechanics, feel welcome to comment with your ideas or to contact me on one of the Adventure Rules social media sites.