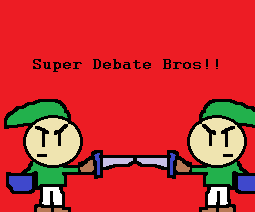 Alright, Adventure Rules fans, I posted in a post the other day that as a new generation of segments rises up, other segments might be falling in glorious battle. Today, I am here to follow up on that statement.

Super Debate Bros is going away.

If you aren’t familiar with Super Debate Bros, it was a segment dedicated to me presenting the arguments for something and the readers voting on that thing. Sounds simple enough, right?

Let’s have a moment of silence for Super Debate Bros, and remember the good times we’ve had with it.

Remember that time that every Link from Legend of Zelda battled, and Ocarina of Time won out?

Remember that time that all the classic fantasy races battled, and elves proved superior?

I’m sure many of you won’t miss this segment too much, but for those who do, I hope you can forgive me and that you’re excited for the other segments that are coming to take its place.

A Casual Stroll should be a lot of fun. I already have some other strolls planned, and hopefully you all will find my advice useful.

I’m still planning on including a Review segment on the blog. Of course, I can’t really review games until I’ve finished them (or in the case of board/card games, played them enough to be familiar with all the cards and such), so that segment may not show its face until late November or early December.

And many classics are still sticking around a while longer. Moral of the Story will still be around for some time, as there are a couple of series that I still have not described my favorite characters from. Quiz Time is both popular and has nearly endless potential, so while it may not happen very frequently, it certainly isn’t going away any time soon.

Special segments like Tabletop Tuesday, Fanfic Friday, Monster Fighting League – all that stuff is safe for quite some time.

So be excited, because although the passing of Super Debate Bros is sad, there are many brave warriors stepping up to take its place on this grand adventure of ours.

Meanwhile, Final Friday finally has some company in the digital afterlife.