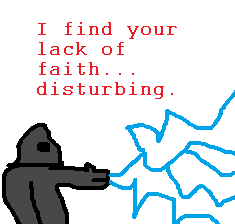 It’s Sunday, and for my family that’s church day. Now I have no intention of making every Sunday post about faith or religion – we’ve got enough themed weekdays as it is – but I thought it’d be fun today to talk about some of the religious beliefs espoused in the worlds of various video games. Some of them seem pretty cool to follow. Others…well, you can decide for yourself if it’s worth it.

The Harvest Goddess – Harvest Moon: Magical Melody
In the world of Harvest Moon, the goddess is a benevolent and loving master who helps crops to grow and brings the world light and joy and you know the drill. Here’s the thing, though – she needs a lot of attention, and she’s pretty picky about the lifestyle that people lead. Specifically, the townsfolk need to live simple lives. Farming, ranching, taking care of animals – those are pretty much your only options. If you take your focus off nature to do something like, say, play a video game (is that irony?) then the Goddess gets all huffy and turns herself to stone. Then it’s your job to wake her up so everything can be happy and safe and prosperous again. And how does she wake up? You farm some more. The concept works for a game like Harvest Moon, where the atmosphere is meant to be relaxing and simple. But as far as real life? Yeah, I’m gonna pass on the constant farming.

Celestrians – Dragon Quest IX: Sentinels of the Starry Sky
This is actually a pretty interesting concept. The Celestrians are these angelic beings that watch over the world in exchange for something called benevolessence. And when I say “watch over,” I really mean watch over. They stop people from being attacked by monsters, help them to find their lost things, ferry the souls of the dead safely to heaven, and even clean their houses for them! Celestrians are plentiful, with one stationed to watch over every town, so they always have plenty of attention to give to those who need them. And the whole benevolessence thing? That substance is a crystallized form of pure gratitude. So as long as you appreciate the Celestrians for what they do, they’ll keep on doing it! It’s a pretty sweet deal, especially when you have a pet that leaves its droppings everywhere.

Fal’cie – Final Fantasy XIII
Okay, I’m gonna throw in a disclaimer here and say that I have NOT finished Final Fantasy XIII, nor have I played XIII-2 or XIII-3. However, I know enough about how their gods work to know I would not want to live in Final Fantasy land. The fal’cie are these massive mechanical gods who have the power to brand human beings as their chosen ones. These chosen humans, known as l’cie, are given a special task called a focus. The brand given to the l’cie has incredible magical power, but it also has a time limit. Reaching the end of that time limit without completing the focus results in transformation into a creature called a c’ieth (I’m probably spelling all of these words wrong). C’ieth are mindless beings that are constantly suffering, the ultimate punishment from the gods. “So what you get for completing your focus successfully must be really good, right?” Yeah, it’s so great…you get to go to sleep as a crystal forever. Technically, you’re alive, yeah, but it’s not like you’re enjoying an eternal life of food and drink and laughing and singing. You’re stuck in a crystal, asleep, not doing anything for years and years. It’s technically possible to wake up from this sleep, but then you start the whole ridiculous cycle again. I’m gonna pass on all that nonsense, thanks.

The Triforce – The Legend of Zelda
We all know this story, right? Maybe not, so I’ll explain it. Long ago, three golden goddesses called Din, Farore, and Nayru created the world. Din formed the land itself, Nayru created the natural laws of the world, and Farore populated that world with living beings. After their work was done, the three goddesses departed from the world. At the point where they ascended to the heavens, their convergence left behind a powerful relic – the Triforce. Whoever touches the Triforce is tested – if that person has courage, wisdom, and power in equal measure, the Triforce will grant their wish and the world will be happy and prosperous and yada yada. But if someone unbalanced touches the Triforce, it will split into three pieces representing courage, wisdom, and power. Those pieces will find those who resonate most with them. If they are united again, then the Triforce will grant a wish to anyone who touches it (and seriously, you have to touch it. Shouting your wish dramatically to the sky doesn’t matter). Now if a good person makes this wish, you still get the happiness and the prosperity and the yada yada. But if an evil person makes that wish, the world is plunged into darkness and suffering. I’m a little conflicted on this one, because the chances of an evil person touching the Triforce in this day and age seem awfully high…

Ashunera – Fire Emblem Radiance
Okay, this one is a doozy, so bear with me. Long ago, there was a benevolent and wonderful goddess named Ashunera. She was wise and kind and loved everybody and always made perfect decisions all the time. That is, until she decided it was a better idea to be separated into two separate goddesses. Bad move. Instead of one wise and benevolent goddess, the world ended up with two extremists: Ashera and Yune. One representing total order, the other representing total chaos. Now all of the racism and bigotry in the world made both goddesses sad, and Ashera had the solution: blow everyone to smithereens. Yune felt that was a bit cruel, and eventually an accord was reached. The world had one thousand years to prove that racism and prejudice could be overcome. If that thousand years passed in peace, the goddesses would return and grant their blessings to everybody. However, if those years were ravaged by war, Ashera would follow through on the “blow the crap out of everybody” plan. During this time, Yune would be put to sleep to prevent any trouble brewing. Humanity was given a way to wake her up in case they wanted to be judged earlier than planned. This religion would be pretty lousy to have in real life. I mean, prejudice of all kinds is still causing war, murder, and hatred all over the world. Ashera would have blown the crap out of us two World Wars ago.

In the end, it’s probably best that all of these gods and goddesses only exist in video game land. Is there a video game faith that you wish was real? Or another one you’re glad isn’t? Feel free to discuss your thoughts in the comments!