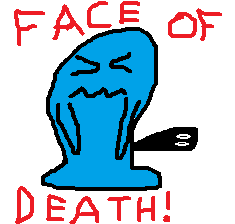 It’s probably difficult to imagine a universe where Pokemon are scary. The games are all about the love and trust between these creatures and their trainers, and even the most powerful ones can be easily tamed and controlled. The only really creepy thing about Pokemon is the Pokedex and its descriptions of them, but that topic has been wildly overdone. Instead, I’m going to talk about the Pokemon that end lives.

“There are Pokemon that kill? I thought everything just fainted in those games?” You’re right. In real Pokemon games, Pokemon don’t kill each other. But there’s this nifty challenge playthrough for Pokemon games called the Nuzlocke that suddenly makes things a whole lot scarier.

If you’ve never heard of a Nuzlocke, here’s how it works. In each new area, you’re only allowed to capture one Pokemon, and it has to be the first one you meet on the route. If you make it faint or it runs away, too bad, so sad, no new Pokemon for you. Additionally, if a Pokemon on your team faints, it is considered dead and must be rid of forever. This adds a lot of new challenge to the game, because your supply of fighters is limited and can be depleted if you don’t play strategically.

So for this edition of Give Me the Creeps, we’re going to talk about what I believe to be the five scariest Pokemon to encounter during a Nuzlocke challenge. I’m going to stick to standard wild encounters – yes, it’s very scary to fight Mega Groudon during a Nuzlocke, but legendaries are OP and don’t really count. Let’s get to the list!

#5: Raticate – Heartgold/Soulsilver
Raticate is an OG Pokemon, scrambling around routes ever since the first generation. It’s a normal type Pokemon with big ole fangs, and those big ole fangs are a big reason why Raticate is on this list.
Raticate gets a number of dangerous moves related to those fangs. Super Fang cuts your Pokemon’s HP in half. Hyper Fang is a powerful normal type move that Raticate gets at a pretty low level. Bite and Crunch are dark type moves that harm ghost type Pokemon, a natural enemy to normal types. These moves can do a ton of damage, and with Raticate’s high speed, this Pokemon can often deal that damage faster than your Pokemon can react.
Perhaps its most dangerous move, though, is Pursuit. Pursuit is a relatively weak dark type move with one unique side effect: the power of pursuit is DOUBLED if the target is trying to run away or switch out. So say you’re training a weak Pokemon you just caught, and suddenly you run into Raticate. You want to switch out to bring in a stronger fighter, but just as you’re trying to switch, Raticate uses Pursuit. Suddenly BAM, your squishy new Pokemon is now a corpse lying on the ground. Even if you do manage to bring in that stronger Pokemon, Raticate’s powerful moves make it a threat not to be trifled with.

#4: Inkay – XY
Inkay is a new Pokemon from the sixth generation games X and Y. Inkay is a deadly force because of the combination of two specific moves – Swagger and Foul Play.
Here’s how the moves work. Swagger gives the target an attack boost that doubles his or her physical power. Seems beneficial, right? The thing is, that attack boost also comes with the confused status. A confused Pokemon will sometimes punch itself in the face, and the damage from this is influenced by – you guessed it – the Pokemon’s attack power. So Swagger only gives you an attack boost so you can hit yourself that much harder.
Foul Play is an attacking move with a twist – it deals damage based on the target’s attack power, not the attacker’s. So that attack boost from Swagger? Now it’s being used against you AGAIN to make Foul Play deal even more damage.
This combo is deadly. In my experience, all my Pokemon needed to do was mess up one time – hit itself once in confusion – and then a Foul Play would take care of the rest. My first Nuzlocke saw multiple Pokemon sacrificed to Inkay before I decided I would just do my training somewhere else.

#3: Axew – XY
Axew is a dragon type Pokemon who is scary for one reason, but it’s a crazy dangerous reason: Dragon Rage.
If you’re not familiar with Pokemon, Dragon Rage is what is called a set damage move. You see, most moves in Pokemon are calculated with a ridiculous equation using attack and defenses, levels, move power, and typing that eventually gives you a damage percentage. Set damage moves ignore all of that nonsense and just deal a specific number of damage, guaranteed. For Dragon Rage, that specific number is 40.
40 damage may not seem like a lot, but it really depends on your Pokemon’s level. Yeah, a level 100 Pokemon with 300-400 HP can handle Dragon Rage like a champ, but a level 15 or 16 Pokemon barely has more than 40 HP. So imagine that you’re making your way through a cave with Axew in it. You’ve already fought a couple of pesky Zubat and took a couple hit points of damage, but you’re more than ready for any other threat in the cave. Suddenly, one of those Axew show up. You attack it and deal a pretty good chunk of damage – and then it uses Dragon Rage. In one move, your almost-full-HP Pokemon is now a corpse on the ground. No warning. No stopping it. All you can do is cry. And hate Axew forever.

#2: Graveler – XY
Another Pokemon from the first generation, Graveler is a big ole rock that’s scary because of a deadly combination of ability and move. Specifically, the Sturdy ability and the move Explosion.
Sturdy prevents the Pokemon from being defeated in one hit. That means that unless you have a super-effective multi-strike move like Water Shuriken, Bullet Seed, Bone Rush, or Bonemarang, no move is going to take Graveler down in one blow. That means Graveler is guaranteed to get one attack off, and if that attack is Explosion, then you’re in trouble.
You see, Explosion has the highest move power in the game: 250. To put this in perspective, that’s more than twice as much as series classics like Fire Blast, Thunder, and Blizzard. And when Explosion hits you, it ignores half of your defense. That much power combined with the lowered defense is devastating, and Graveler seems to take pleasure in living a super-effective attack with Sturdy and then unleashing an Explosion on unsuspecting travelers.

Now these are all deadly enemies who have slain at least one of my Pokemon during my Nuzlocke adventures. But seeing any one of these pesky enemies is nothing compared to the sheer horror of encountering the ultimate Nuzlocke killer. A Pokemon so powerful and frightening that I have lost a comrade to it in every single Nuzlocke I have played. An encounter you can’t run from, a battle you have to fight, knowing that it will cost you dearly. What could this horrible creature be?

#1: Wobbuffet – Ruby/Sapphire onward
Wobbuffet has been around since generation II, but it was with the introduction of abilities in generation III that it became the ultimate horror.
First of all, Wobbuffet is just creepy looking to begin with. Its tall blue body is actually its tail, and the tiny inconspicuous black thing with eyes that appears to be its tail is actually its body. At least, that’s the rumor, as Wobbuffet protects its tail viciously.
Second of all, Wobbuffet’s moveset is both aggravating and dangerous. It’s main moves are Counter, Mirror Coat, Safeguard, and Destiny Bond. Here’s how they work. Safeguard prevents Wobbuffet from being inflicted with a dangerous status problem like poison, paralysis, burn, or sleep. Counter and Mirror Coat are both counterattacks – when Wobbuffet is hit with a physical attack or a special attack (respectively), the move strikes back to deal double the damage that Wobbuffet took. Finally, Destiny Bond makes it so that if Wobbuffet faints on the next turn, the other Pokemon will faint right along with it.
Third of all, Wobbuffet’s ability is Shadow Tag. This prevents any Pokemon from running away or switching out through normal means. Once you’re locked into battle with Wobbuffet, you’re stuck there.
So here’s how the typical encounter goes. You meet Wobbuffet in a cave. You know this thing’s a pain, so you try to run. Nope, Shadow Tag. Then you try to switch to a Pokemon who can handle the fight better. Nope, Shadow Tag.
Okay, now you’re stuck. You try to use your strongest attack to just take the Wobbuffet out quickly – wait, it survived? That barely hurt it at all! Now it’s using Counter…and you’re left with two HP. Better use a potion. Crap, now Wobbuffet used Safeguard, you can’t paralyze it or put it to sleep for a few turns. You hit it with a weaker attack this time, hoping that Wobbuffet will do less damage in return. You luck out – it used Mirror Coat when you hit it with a physical attack, no damage. You wind up for the finishing blow – and Wobbuffet uses Destiny Bond. You watch in horror as your Pokemon takes Wobbuffet down, and the grinning monster drags your Pokemon’s carcass to the depths right along with it.
It’s not impossible to beat Wobbuffet, and there are a few ways to outsmart its strategies. But many of these ways take preparation, and in a game where the encounters are random, you can’t always prepare for every possible situation. You can only hope that when a Wobbuffet appears, you’ll be ready – or that the Pokemon it murders isn’t one you cared about all that much.

If you’re a Pokemon fan, be sure to comment with the Pokemon that freaks you out the most. I imagine I missed many that can make a Nuzlocke run into a nightmare. There are over 700 of the goofy things, after all.

One thought on “Give Me the Creeps: Pokemon Edition”