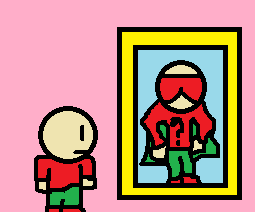 It’s Tabletop Tuesday, and just like last week, today’s post coincides with another special event: a quiz! Aw yeah, quiz time is here to stay, and this time it’s all about Mutants and Masterminds.

M&M is a tabletop RPG focused completely around superheroes, and there are quite a few archetypes that most heroes fall in to. These archetypes replace the character classes you would normally find in games like Dungeons and Dragons, and because they’re super-heroic, they have a unique flavor all their own.

The quiz you’re about to take will decide what kind of superhero you should be. It will sort you into one of nine hero types by quizzing you on two categories: Body or Mind, and Natural or Unnatural. You’ll answer questions by choosing the answer “Mutants” or “Masterminds.” Once you have both sections graded, the answers together will tell you your hero type. Alright, enough explaining; let’s get started!

Section One: Body or Mind
1.) The night before a major exam, you had a family emergency and weren’t able to spend any time studying. You plan to study the next morning while you eat breakfast. However, when you wake up, you look around and realize there’s no food in your dorm room. You now have to choose: go get breakfast just before class, or spend what little time you have studying. What do you do?
Mutants: Eat! I won’t be able to focus if I don’t prepare myself physically for the test.
Masterminds: Study! I’ll be fine without food, but I need to prepare myself mentally for the test.

2.) You are the third child in your family, your older siblings a set of twins. One is a sports star on national television and is always bragging about her game-winning points and how famous she is. The other is a medical scientist who just had a major breakthrough and whose discovery will lead to the development of a new medication. She now believes herself to be God’s gift to the medical community. Who annoys you more?
Mutants: The scientist sister. Just because she invented one medication doesn’t mean she’s the smartest person on earth.
Masterminds: The athlete sister. Being able to pass a ball should stop being celebrated once you’re over two years old.

3.) You’re the leader of a team at your work dedicated to a very important project. Lots of things have gotten in the way as of late, and your boss just informed you that if you don’t overcome the hurdles by next week, you’ll be looking for a new job. You want to blow off steam but you also need to figure the project out. What do you do?
Mutants: Blow off steam. Once I get my mind off of it for awhile something will just come to me.
Masterminds: Finish the project. I won’t be able to relax until I get the problems figured out first.

4.) You’re a contestant on the game show Opposites Attract: Extremely Arranged Marriage. You have two choices for your future spouse. One is exactly what you want physically in a partner, but has a glaring personality flaw that really gets on your nerves. The other has everything you want emotionally in a partner, but has an unattractive feature that is very off-putting to you. Which one do you choose?
Mutants: The first spouse. No couple has everything in common, so why not go for the most attractive choice?
Masterminds: The second spouse. Beauty doesn’t last forever, so why not go for an emotional relationship that will last?

Section Two: Natural or Unnatural
1.) You have a vacation coming up that you’ve been planning for a year. Two days before you set out, you start having flu symptoms. You can get some medicine to lessen the symptoms, but you’ll have to deal with  being sick on your vacation. A friend tells you an old wives’ tale about a mix of garden plants that’ll heal you right up, and swears it works for him every time despite the lack of medical evidence. What do you do?
Mutants: Try the plant concoction. If it’ll heal me completely it’s worth a try.
Masterminds: Stick to traditional medicine. I’m not putting weird stuff into my system.

2.) You find yourself in the most horrifying situation imaginable – you’re at the book store with only enough money for one book! You manage to narrow it down to two options. One is the autobiography of your role model, a book all about their life and the things they’ve accomplished. The other book is a fictional work by your favorite author, the next piece in an ongoing series. Which do you choose?
Mutants: The fiction. Reading is all about escaping to another place.
Masterminds: The autobiography. Reading is for learning about the real world.

3.) You’ve just scored a date with the guy/girl you’ve been crushing on for the past year. (S)he has pretty high expectations for your first date, and it’s up to you to come up with something really creative. You start to schedule a road trip to two of his/her favorite parks in the state, but at the last minute find out about a movie marathon showing his/her favorite trilogy in theaters for the first time in ages. What do you do?
Mutants: Change to the movie date. The parks will always be there, but these movies may not be on the big screen again.
Masterminds: Stick to the park date. A road trip and some time out in nature will be a lot more romantic.

4.) You live in the future-paleolithic society of Grushnor, a land where robots, humans, and animals all live together in one city. Your friend Skreeya just won a radio contest and gets to choose tickets to one of two events. One is a gladiator battle, a contest to the death between a man and a lion. The other is a robot wrestling match where inventors pit their machines against each other. Which do you encourage her to choose?
Mutants: Robots! Seeing all those tech weapons in action is way cooler.
Masterminds: Gladiators! Watching a man struggle for his life against a wild beast is way cooler.

Results
If you results were…
Body and Natural: You are a Paragon, the pinnacle of some aspect of the human form. Whether you have super strength, speed, toughness, or some combination of the three, you are above and beyond the human limit and everyone aspires to achieve what you have. You may have things in common with heroes like Superman or the Flash.
Body and Balanced: You are a Warrior, a combat expert with rigorous physical training. You augment your fighting abilities with something that makes you stand out, perhaps a tech weapon beyond normal means, or a superpower like regeneration or teleportation. Wolverine would likely fall into this category.
Body and Unnatural: You are a Powerhouse, a sheer force of physical ferocity driven by some force outside of yourself. Whatever twisted you into the thing you are, it makes you strong beyond belief, though it also scars and changes you. The Hulk is someone who can identify with you.
Balanced and Natural: You are a Martial Artist. Your body and mind have both reached the peak of human potential, all through meditation and grueling training. You need no weapon because you are a weapon. Daredevil would totally hang out with you.
Balanced and Balanced: You are a Crime Fighter. You’re strong, smart, and can hold your own unarmed if you need to, but chances are you have some gear to give you a helping hand and to give you an edge when you need it. Batman wouldn’t admit it, but you’re in the same club he is.
Balanced and Unnatural: You are a Mimic. Your power comes from other people, and that means that whether it’s physical or mental depends completely on the person you’re borrowing from. But hey, that just means you’re versatile, and no one else gets to experience as many powers as you do. Rogue is a good example of a Mimic.
Mind and Natural: You are a Psychic. You have pressed your squishy human brain until it broke the bonds of reality and became something extraordinary. Your powers are totally natural but seem beyond this world. You should take some lessons from Professor X.
Mind and Balanced: You are a Gadgeteer. Some people say you don’t have powers, that you’re just a glorified inventor, but they’ll change their tune when your high-tech battlesuit is the only thing standing between them and certain destruction. You and Iron Man can have a crazy party together that he’ll forget about the next day.
Mind and Unnatural: You are a Mystic. You’ve plunged your mind into a world of esoteric mysteries and thaumaturgical power that gives you command over the elements and lets you bend reality to your will. No one understands your ways or where your power comes from – maybe you don’t even fully comprehend that. You share this category with heroes like Dr. Strange.

So there you have it! What power did you end up with? Would you have preferred a different one? Discuss it in the comments, along with the possibility of forming our own Avenger League of Justice Friends, or something. And remember, if you like this post, be sure to celebrate Multiplayer Week by sharing it with a friend either in person or via social media. Compare your results and see who the cooler superhero is!

One thought on “Quiz Time: What’s Your Superpower?”