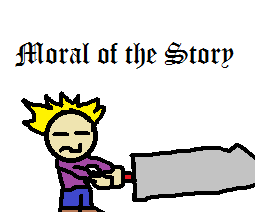 It’s Final Friday here on Adventure Rules, and along with it comes the introduction of a new segment!

The segment is called Moral of the Story, and it’s my own version of a Top 5 list. I’ll list my top five favorite characters and tell the reasons why I enjoy those characters. At the end of each character’s bio, you’ll find the moral of their life story, a lesson you can learn from them. So you get five little life lessons for the price of one blog post!

Because today is Final Friday, we’ll be talking about my top 5 Final Fantasy franchise characters. Remember, these are my own personal top favorites and in no way reflect the actual quality of the writing or character development found in their games (probably). So without further ado, let’s talk about #5!

#5: Quistis Trepe – Final Fantasy VIII
Quistis is one of the six main playable characters in FFVIII, and while she isn’t my favorite as far as combat is concerned, her personality is a lot of fun. Quistis is a child prodigy, and by age 18 she is an instructor to many of the other characters in the game. This makes her feel somewhat isolated from her peers, as all the people her age are technically her subordinates.
Quistis tries to solve this problem by being less authoritative when she’s teaching. She wants to be friends with the other teens, and so she tries to play it cool and goof off with them rather than being their teacher. However, this has quite a different effect – Quistis does not make friends, but she also does not succeed as a teacher. Her lack of leadership ability gets her fired as an instructor, and her social life has not benefited for it. Things do get better for Quistis and she finds her place, discovering her role as a big sister within the party. But she has to go through a lot of trouble before that happens.
Moral of the Story: Don’t lower yourself just to make friends. Your real friends will be there no matter what.

#4: Gordon – Final Fantasy II
Gordon is the prince of Kashuan along with his brother, Scott. Their kingdom is allied with Fynn, and the princess of Fynn has caught the eye of both brothers. However, one day an evil emperor sends his forces into Fynn. While Scott fights valiantly for his allies, Gordon turns away from his brother and runs. The king of Fynn is mortally wounded in that battle, and Scott loses his life.
Gordon punishes himself for his cowardice, sulking in the city of Altair while a rebellion forms to take back Fynn from the empire. No amount of encouragement will get Gordon to take part – until a massive airship called the Dreadnaught lays Altair to waste. Refusing to sit back any longer, Gordon helps to destroy the airship, rescue Princess Hilda (who was replaced with a spy during the chaos), and then leads the rebel army. He realized that punishing himself for his moment of cowardice was simply making him more of a coward – the time had come to stand up and fight for his friends, and for those he had lost. By the end of the story, Gordon has proven his bravery many times over in the battle against the empire.
Moral of the Story: One act of weakness does not define your whole life, unless you let it.

#3: Cloud Strife – Final Fantasy VII: Advent Children
Okay, so I’m gonna be referring to the film a lot in this case, because my favorite aspect of Cloud’s story arc happens in the movie.
Arguably one of the most iconic moments in gaming history is when Cloud’s nemesis, Sephiroth, kills his beloved Aerith right before his eyes. I knew about that scene before I’d ever played one second of FFVII. Killing off one of the game’s most beloved playable characters was a bold move that made Sephiroth one of the most hated villains in Final Fantasy history. And this moment scars Cloud, as he blames himself for failing to save Aerith’s life.
In case you don’t know, Cloud mind has been broken by the events of his past. The story of Final Fantasy VII is full of identity crises, and Aerith’s death is something of a tipping point that shatters Cloud’s mind pretty badly. Even after defeating Sephiroth and saving the planet, Cloud still carries the burden of Aerith’s death. It colors his whole attitude about himself.
During the events of Advent Children, Cloud constantly has sickness-induced episodes of madness where he encounters Aerith and speaks to her about her death. He is anxiously searching for forgiveness, desperate to be freed from his guilt. But then Aerith asks him the million dollar question: “[Forgiven] by whom?” Cloud’s guilt is self-induced. He realizes that no one, not even Aerith, has ever blamed him for what happened. The circumstances of her death were out of everyone’s control, but looking for someone to blame, Cloud had chosen himself.
Done with his dilly-dallying, Cloud frees himself from his personal prison and goes on to defeat Sephiroth yet again. Because that’s what Cloud does best.
Moral of the Story: Don’t blame yourself for the things you can’t control.

#2: Sazh Katzroy – Final Fantasy XIII
Okay, so before I go into too much detail about Sazh, I understand that the portrayals of black people in Final Fantasy are often racist. For some people, the jury is still out whether Sazh’s portrayal is racist or not. I’m not here to comment on that – I just want to talk about why Sazh is my second favorite character in the entire franchise.
In an attempt to keep the spoilers at a minimum, I’m gonna explain Sazh’s story like this. He has a son named Dajh, who he loves very much. But Dajh is different from other kids – he’s been chosen by the gods to complete a Focus. Now having a Focus is a pretty dangerous issue. Failing it means you turn into a mindless, soulless monster. But completing your Focus isn’t considered much better – you turn into a crystal statue. For friends and family, this fate is just as much like death as the other.
Sazh spends the duration of the game working to save Dajh from this fate. He’s not the toughest guy in the group, the most experienced warrior, anything like that. But despite all the crazy dangerous things that keep happening with gods, Focus, monsters, and the hellish land of Pulse, Sazh sticks around for love 0f his son. As it turns out, his comedic attitude and mature perspective are quite valuable to the group, and even though he’s not the mightiest warrior, he supports his team until they are finally able to save the world – and Dajh.
Dads get a bad rep in the gaming world, and in the media in general. Commercials love to poke fun at how inadequate dad is at home with the kids. Let’s watch him put a diaper on the ceiling fan while the baby throws food onto the nice clean floor, haha, so funny. In games, most dads are absent from their children’s lives, or involved directly in the worst way possible, abusing their kids or even becoming the villain of the story.
Sazh is proof that not all dads are created equal. He goes through incredible trials during his adventures. He has to watch his son turn to crystal, not knowing if he’ll ever get Dajh back. He gets a Focus himself, and is unsure of his own fate. Yet he willingly goes through all of it for Dajh’s sake. Sazh is an awesome father who does everything in his power to give his son a better life. And that’s why he’s an amazing character.
Moral of the Story: Not every father is a monster or dunce. Some will do everything they can for the life of their children.

#1: Vincent Valentine – Final Fantasy VII: Dirge of Cerberus
Vincent appeared as a secret character in Final Fantasy VII, and by the end of the game much of his story was still left up in the air. He was a popular enough character – and enough questions were asked about him – that Square Enix decided to create a spin-off game dedicated to Vincent’s story and its resolution.
Here’s the skinny. Vincent once worked for Shinra Electric as a Turk, a sort of special agent. His father was a scientist with a young assistant named Lucrecia. Vincent loved Lucrecia, and the feelings seemed mutual – until one day, his father died in a horrible lab accident. Blaming herself, Lucrecia distanced herself from Vincent and instead began seeing another scientist named Hojo.
If you’ve never played FFVII, Hojo is the baddest news there is. Remember Sephiroth? The guy who killed Aerith? Hojo is his father, and the source of all his madness.
When Vincent learns that Lucrecia is grudgingly allowing Hojo to experiment on their unborn child, he decides to confront the scientist and stop him. Hojo wins that battle, killing Vincent on the spot. But rather than waste a perfectly good specimen, Hojo does some experimentation, splicing Vincent’s DNA along with some ugly monsters to turn Vincent into a shapeshifting horror.
When Vincent wakes up, realizing what he is and that Hojo’s evil cannot be stopped, he locks himself into a coffin.
“Seriously? A coffin? This guy is your favorite?” Yeah, Vincent didn’t really make the right choice back then. And he continues to not make the right choice. In Advent Children, Cloud (who, if you remember, similarly feels responsible for terrible events outside of his control) asks Vincent if he thought people could be forgiven for their sins. Vincent just shrugs and says, “I’ve never tried.”
Vincent does eventually confront his past in the events of Dirge of Cerberus. And while Vincent is my favorite character because of his anguish-filled backstory, awesome design, creepy personality, and cool fighting style, his role on this list is to provide a cautionary tale – what not to do. Vincent chose to hide away rather than face his past, and in the wake of that Sephiroth terrorizes the world not once, but twice. Had Vincent chosen to act sooner, to confront his dark history rather than hide in fear of it, he could have prevented a lot of catastrophes.
Moral of the Story: Confronting the difficult times of your past is the only way to have a future.

There you have it, my top 5 Final Fantasy characters and the lessons that they teach. Did your favorite make this list? If not, share in the comments what characters you love and what they have to teach us about life.

One thought on “Moral of the Story: Final Fantasy Top 5”