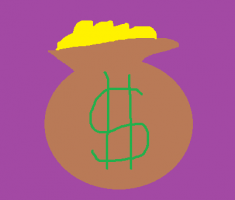 I’ve been out of college for over a year now, and I find that money (or rather, lack of it) is a pretty consistent problem for me. So for this Final Friday on Adventure Rules, we’re going to take a look on some ways that Final Fantasy has taught us to make money.

I imagine that most everyone has at least heard of Final Fantasy. It is a popular series made by Square Enix, and is notorious for being anything but final. There are currently fifteen main series games, plus a ton of spin-offs that include mystery dungeon games, fighting games, shooters, and even rhythm games. The typical genre of the series is turn-based role playing game (this describes at least the first ten). I myself am most familiar with the earlier games in the series, and therefore will be using those to inform this post.

Let’s start as if we’re just beginning a new adventure. You just moved into a new home in a new town and need a way to make some money. The very first thing you do is explore the town. Go up to every house in your neighborhood and knock on the door. If someone answers, talk to them. Often, when you talk to people, they just give you stuff. That’s how the world works. Or if they don’t give you stuff, they’ll tell you something really useful. Like how you should keep a journal.

Once you’ve gotten as much money and information as you can from your neighbors, leave town. If there are some woods nearby, that’s where you want to go. Make sure you take a weapon with you. If you don’t have something that’s actually dangerous, a kitchen knife will do the trick. Start wandering aimlessly around the woods. Eventually, a wolf or a bear will attack you. Take that kitchen knife or whatever you have and kill the animals. Each one will drop a few bucks, and after like three hours of wandering around you should have at least one hundred dollars.

Now you could stop there. But that’d be monetarily irresponsible. You know you need more than one hundred dollars. So go to the store. More than one store, actually. Buy the coolest kitchen knife you can find. Buy the most comfortable shirt, the best-fitting pants, the most stylish socks. And once you’ve done that, sell your old stuff. Why do you need two shirts? Or two of any article of clothing? Just wear the most comfortable, best-looking one every day. Sell all your old clothes and run around exclusively in your new duds.

At this point you should be ready to visit the local government. In all likelihood, the mayor will have something he or she is worried about. A delinquent son, a daughter with a dangerous boyfriend, a cheating spouse; once you find out it becomes your job to solve the problem. This will probably be violent and take up way too much of your time, but when it’s over the mayor will give you a bunch of money as a reward. At that point he or she will recommend you to another mayor, and your career as a fixer will have officially begun.

So there you have it! Explore town, kill animals, sell your stuff, and do dirty jobs for the mayor of your town. Do that, and you’ll have dolla dolla billz for days.

Of course, these are just the most basic methods of getting money. What’s your favorite way to farm for gil in a Final Fantasy game? Discuss it in the comments and decide if you’d try it in your real-life adventure.