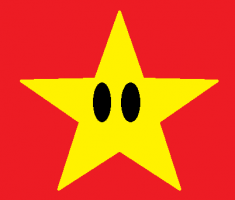 For every person that has stuff to wish for, there’s a different method of making wishes. Throwing pennies into wells, blowing out birthday candles, waiting until 11:11 to make your wish – but the classic method is to wish upon the stars.

I tried this once as a young boy. I’d just played a video game called Gex III: Enter the Gecko, and I really wanted to own a copy instead of just renting it. So I went outside, looked up at the sky, and wished upon the stars. Pleading to the sky above, I asked for that game.

Needless to say, I never got it. Because wishing on stars isn’t real, right? WRONG. The reason my wish didn’t come true is because I wished incorrectly.

Don’t let that be you, readers. Heed my words, and your wildest wishes will come true.

Paper Mario has everything you need to know about the stars. They grant wishes with the help of something called a Star Rod. This magical wish-granting wand is protected by seven Star Spirits, and it is these spirits who decide which wishes should be granted. So in order to have your wish granted, you need to wish upon the correct star.

In order to help you with this daunting task, let’s take a look at the Star Spirits and their roles.

#1: Eldstar
This kind fellow with a magnificent grey mustache is the oldest of the Star Spirits. He watches over the elderly, and gives rest to those who need it. Of course, he gives old-people rest, which isn’t really all that restful, but that’s still better than nothing. Anytime you wish for a pick-me-up or make a wish for an old person, this is the star to talk to.

#2: Mamar
Is her name Mamar because she’s the “ma’am star,” or is it after the mammary gland? Both are appropriate, as Mamar watches over mothers and children. She sings sweet lullabies over them to help both get rest. When you need to make a wish concerning your mother, your child, or your mammaries, look no further than Mamar.

#3: Skolar
This powerful Star Spirit watches over nerds. He’s smart, but sometimes a little too smart for his own good. He can also call meteors from the sky to crush the enemies of those who make wishes to him. Of course, he doesn’t grant a wish like that to just anybody – he needs a fellow intelligent, socially awkward soul to make such a wish to him.

#4: Muskular
The guardian of sailors and anybody who likes to wear sailor costumes. Muskular is buff, handsome, and loves the deep blue sea. Interestingly, though, he’s also the voice of reason among the Star Spirits, and he keeps them from knocking each other’s blocks off. When you find yourself wishing that someone would just chill out, make that wish to Muskular.

#5: Misstar
This star watches over strong, independent women who don’t need no man. But she also gives wet, sloppy kisses to any man who wishes for her to come and help them when they’re about to pass out from agony. How does that help the pain? No one really knows, but next time you lose a limb or someone blows a hole in your stomach, just wish for a kiss from Misstar and everything will be okay.

#6: Klevar
Haha, get it? Because she’s the “clever star!” So Klevar…haha. Ah. She may got a bunch a that thar book learnin’, but her real talent is putting people into time out. While she’s smart, she’s not so smart that it cripples her. This separates her from Skolar. Who I just realized is probably the “scholar star.” Whoa. Next time you need to put a kid in time out or you need help solving your math homework without looking like a dork, make a wish to Klevar.

#7: Kalmar
The most bland-looking Star Spirit whose only distinguishing feature is a mustache. Kalmar turns people into stars, that way we never run out. Other than that, though, he seems kinda useless. So next time you want someone to “disappear,” just wish that Kalmar will make them a star. Then you should never hang out with him again.

#8: Twink
“Wait, didn’t you say there were only seven Star Spirits?” I did. But Twink is an honorary Star Spirit, thanks to his bravery and his willingness to try his hardest no matter what. Twink is therefore the guardian of the little guy, watching over the oppressed and flying around with his stubby star feet to try and help as many people as he can. Whenever you’re being put down or you think you could never get out of your situation, just make a wish to Twink. He may not get the wish approved, but when he flies down to try to help you out in person it will be the cutest thing in the universe.

There you have it! Now that you’re educated about Star Spirits, you can make those wishes properly and always get exactly what you want. Except…I never figured out which one can give me Gex III: Enter the Gecko. Looks like I’m still out of luck.